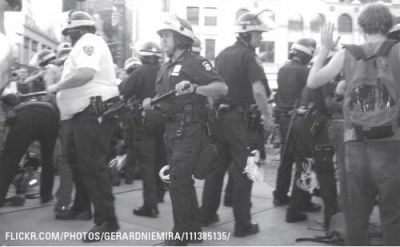 During the 2004 Republican National Convention in New York City, police arrested more than 1,800 people, illegally fingerprinted massive numbers of detainees in a single day and crammed other demonstrators into restrictive “free speech zones.” Whatever message demonstrators were trying to relay was overwhelmed by a police department seeking both total control of public space and information about activists’ political affiliations and opinions.

Eventually, the world learned the FBI and the New York Police Department were not only abusing civil liberties on the streets, but that for months prior to the RNC, they were also spying on activists across the United States, Canada and Europe. And video evidence from the activist group I-Witness Video showed the NYPD deploying provocateurs to create chaos to justify police attacks and mass roundups.

Four years later, civil liberties lawyers and activists are laboring to ensure that NYPD tactics aren’t employed in Denver, site of the Democratic National Convention starting Aug. 25, and St. Paul, where the Republicans are holding their convention starting Sept. 1.

“People have the right to come to an event and be heard and think of themselves as a citizen, not just as a protester,” says Bruce Nestor, former president of the National Lawyers Guild who is helping with legal work in the Twin Cities. “When you’re confined in a barricade or a pen it’s hard to get people to come and believe that they really have a right to freely act and to freely express their opinion.”

Twin Cities police are planning for as many as 100,000 demonstrators on the streets protesting the Iraq War and lack of social investment on the first day of RNC 2008. In Denver, thousands of young people are coming to town for Tent State University, a campus-born initiative that opposes the war. Tent State is part of the Alliance for Real Democracy, which will feature “classes” and music as an alternative to activities inside the convention center.

There are already signs of intelligence gathering and harsh policing in what local activists call “test runs” for the convention. Last August, St. Paul police reportedly attacked Critical Mass bicycle riders with mace and tasers in what one lawyer called a “police riot,” arresting 19 on charges of disorderly conduct. In Denver, police rounded up 82 people last Columbus Day — and arrested one person who tried to photograph someone he suspected was an undercover officer. Then the police asked his college to discipline the student.

This July, Erin Rosa of the Colorado Independent reported that the regional government “fusion” center, staffed with personnel affiliated with the FBI, Colorado State Police and Colorado National Guard, was preparing to sort through and analyze “intelligence” from multiple government and business sources for use by law enforcement in Denver during the convention. These centers allow local police to access information on individual activists that the police agencies are otherwise banned from retaining unless there is reasonable suspicion of criminal activity.

While Denver activists and lawyers see no sign of active surveillance, the city is using information legally obtained from public websites in its court documents to suggest there is a threat. Mark Silverstein, the ACLU-Colorado legal director, notes evidence of surveillance usually surfaces after the fact, and adds that government offices are stonewalling his Freedom of Information request on the topic.

Denver’s policing agencies have an aggressive reputation. Before the 2004 RNC, the Denver FBI office gave information to the NYPD that portrayed the local Food Not Bombs as a threat. In a none-too-subtle attempt at intimidation, the regional Joint Terrorism Task Force visited local activists asking if they were going to New York to protest the RNC. And in the Denver “spy files” case, only resolved in 2004, a local police “red squad” was supposedly curbed by new internal rules — not a court order — from continuing to spy on peace activists, Amnesty International and the like.

In the Twin Cities, some activists have reported visits from the Joint Terrorism Task Force and county sheriff. After one University of Minnesota student was nabbed by campus police for spray-painting graffiti, an FBI agent pressured him to spy on vegan potlucks during the RNC and report back to the Joint Terrorism Task Force. (The story, “Moles Wanted,” is at citypages.com.) The Ramsey County Sheriff visited a member of the anarchist RNC Welcoming Committee at her workplace in a possible attempt at intimidation. But as Nestor, the local lawyer says, none of the intimidation is on the scale of what the NYPD and FBI did before the RNC.

Activists say other tactics reminiscent of 2004 threaten to restrict their freedom of speech. Both cities dragged their feet issuing march permits, giving organizers less time to prepare. The Denver City Council banned people from carrying items that could be used in a “lock down” during civil disobedience, and the mayor blocked people from camping in the public park for Tent State University.

Then in Denver, the ACLU took the city to court over its plans to here protesters into “free speech zones” and to require all marches to end more than a third of a mile from the Pepsi Center, where the Democratic National Convention will be held. Protests organizers are calling the demonstration zone a “freedom cage,” which will be surrounded on three sides by concrete barriers topped by a chain-link fence.

On Aug. 7, Judge Marcia S. Krieger ruled that the city’s restrictions do not impinge upon free-speech rights, even while acknowledging that the intended target of the protests, the Democratic Party delegates, will be whisked past the zone in buses.

Silverstein of the ACLU-Colorado lamented the decision, saying that in the wake of Sept. 11 the courts have shifted so far to favoring security concerns over civil liberties that it “diminishes our freedoms.” Silverstein said because of the legal climate, the ACLU would not appeal, or challenge another protest zone at the Denver stadium where Barack Obama is scheduled to give his acceptance speech Aug. 28.

Organizers with the “Recreate 68” coalition, and a plaintiff in the lawsuit, told the media they are also not appealing in court because they have little faith in the legal system, but they will “be appealing it in the streets.”

Denver-area activists and lawyers are also challenging the city police chief who announced last year that his officers would use the NYPD-style tactic of taking into custody those activists charged with disorderly conduct instead of issuing them the usual appearance ticket. Police in New York took thousands of activists and bystanders off the streets using this method. Denver used the tactic at the Columbus Day protest, but recently issued a statement saying that, while the tactic is optional, police are not required to take people into custody.

In St. Paul, lawyers were able to secure activists’ access to the streets in sight of delegates, but the march is required to end before the convention begins. And in a strategy that seems liberal, but which effectively undercuts demonstrators ability to express their issues freely, the city is setting up a stage near the convention center but allotting 48 separate 50-minute speaking slots during the four-day convention, Sept. 1-4, and choosing the speakers through a random lottery. (The “winners” will be chosen on Aug. 12 and announced on the city’s website on Aug. 18, stpaul.gov.)

On Aug. 11, the ACLU of Minnesota sued the city of St. Paul on behalf of the group Impeach for Peace and various individuals, challenging the restricted protest area.

In late July, the Minneapolis City Council weakened guidelines against aggressive police tactics at demonstrations that you could interpret as allowing them to seize recording devices, says Nestor. Such recordings have exposed police misconduct, and I-Witness Video is again organizing activists attending the convention to serve as video watchdogs.

Still creativity is sweeping through the cities. Artists with the UnConvention in the Twin Cities are soliciting videos against the RNC and will plaster yards with posters declaring, “I’m for Pre-emptive Peace.”

Zoe Williams, a 22-year-old activist with Code Pink and the Colorado Street Medics, says activists are coming up “with positive ways to express ourselves,” but “with the city we continually have to argue with them about our first amendment rights.”

Abby Scher is editor of The Public Eye, the publication of the progressive think tank Political Research Associates. Her half-hour radio report on how civil libertarians are preparing for the conventions was broadcast by the syndicated radio show “Making Contact” in April.