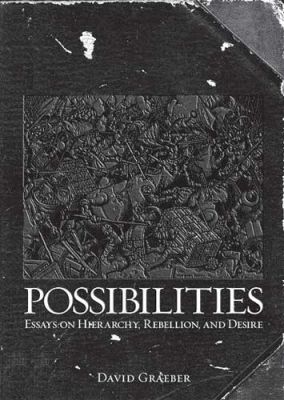 A Review of Possibilities: Essays on Hierarchy, Rebellion and Desire By David Graeber
AK Press, 2007

David Graeber is one of the foremost intellectuals in the global justice movement, keeping one foot in the library and the other in the streets. While working as an anthropologist at Yale University, he was a spokesman for the Direct Action Network in New York. His latest book, Possibilities, reflects this dual role, attempting to critically reflect on the nature of the society we live in, by using the tools of anthropology and writing for an activist audience.

Graeber’s intellectual project here can be taken as a response to Marx’s call for “a ruthless critique of everything existing.” Ranging freely over a wide physical and intellectual terrain, the essays in Possibilities take us from a study of a village in Madagascar where the state government holds no sway over everyday life, to an argument suggesting capitalism is a form of slavery, to a reflection on the building of giant puppets and about police power in United States. A relatively typical essay proceeds from a discussion of the creation of gods in West Africa to an analysis of the social contract and Marx’s conception of the commodity, using this to explore how new social relations might be born. In his meandering way, Graeber attempts to destroy commonplace categories for understanding the world, hoping to open our eyes to the actual possibilities of how the world could be organized — without bosses or the state. Instead of building a comprehensive theory of everything — or anything — he is content to spark reflection and questioning, tossing off provocations and insights.

Possibilities is both a follow-up to, and fulfillment of, Graeber’s Fragments of an Anarchist Anthropology, in which he argued that the tools of anthropology have the potential to help us understand what kind of other world is possible. Inspired by a movement devoted to tearing down walls, he attempts to take concepts nurtured by radicals in the academy to those outside of the “academic ghetto,” even choosing to publish with an anarchist press (AK Press).

Academics are likely to find both the argumentation and citation too loose for their liking — despite eight of the 12 essays having previously appeared in academic journals or books. Activists are likely to find Graeber’s tack too theoretical and his discussions of academic literature too removed from their concerns. Nonetheless, Possibilities is a fascinating attempt at sparking dialogue across the academic-activist divide.