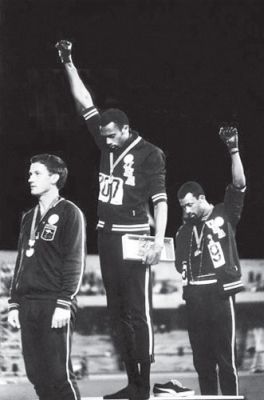 The image lasted for only as long as it took to play the National Anthem — yet it still resonates four decades later. Black American sprinters Tommie Smith and John Carlos, winners of the gold and bronze in the 200-meter race, respectively, bow their heads and raise their black-gloved fists in protest during the medal ceremony at the 1968 Olympics in Mexico City. Unlike other 1960s iconography — Woodstock, Abbie Hoffman, Richard Nixon — the moment doesn’t feel musty. It still packs a wallop.

Just ask LA Times columnist Jonah Goldberg, still so worked up about their gesture that he wrote on July 29 — in language that would shame a satirist — that it was “a symbol of violence — rhetorical, political and literal — against the United States.” (The violence was actually more seen in the response to Smith and Carlos, with death threats and even bullets sent to their homes. But Goldberg doesn’t bother to mention that.)

In Harlem, street-corner merchants even now sell t-shirts with the image of Smith and Carlos emblazoned on them. On HBO in August, you could watch the 2004 documentary “Fists of Freedom,” which told the story behind the protest. On ESPN, a running question for athletes competing in the 2008 Games in Beijing, which begin Aug. 8, is whether they will “pull a Smith and Carlos” to protest the lack of human rights in China. (This question is somewhat odd because the two former athletes did not go to Mexico City to criticize Mexico.)

I recently appeared on a panel on the history of sports and resistance with Carlos and afterward, a long line of young people born years — even decades — after 1968 patiently waited for the former athlete to sign posters, t-shirts, even pins memorializing his protest.

Why has that moment 40 years ago retained its cultural capital?

There are several reasons for the image’s staying power. The most obvious is that people love a good redemption song. Smith and Carlos were protesting racism in sports and society. They wanted South Africa and Rhodesia banned from the 1968 Games because of their apartheid politics. They demanded more black coaches in sports. They sought to hold Avery Brundage, president of the International Olympic Committee, accountable for what many black athletes thought to be a barely concealed racism. They wanted Muhammad Ali — “the warrior saint of the black athlete’s revolt” — to have his heavyweight boxing title restored after it was stripped because of Ali’s refusal to fight in Vietnam. But it was more than a moment, it was a movement called the Olympic Project for Human Rights (OPHR). As Dr. Harry Edwards, who helped organize OPHR, wrote, “It was inevitable that this revolt of the black athlete should develop. With struggles being waged by black people in the areas of education, housing employment and many others, it was only a matter of time before Afro-American athletes shed their fantasies and delusions and asserted their manhood and faced the facts of their existence. … The roots spring from the same seed that produced the sit-ins, the freedom rides and the rebellions in Watts, Detroit and Newark.”

Smith and Carlos were reviled for taking a stand and using the Olympic podium to do it. But their “radical” demands have since proved to be prescient. Today the idea of standing up to apartheid South Africa, racism, and for Muhammad Ali seems more common sensical than radical. After years of death threats and lives as athletic pariahs, Smith and Carlos attend ceremonial unveilings of statues erected in their honor.

It’s been quite an adventure, one that says more about our collective journey than theirs. There’s another reason why the image of raised black-gloved fists have retained their power. Smith and Carlos sacrificed privilege and glory, fame and fortune, for a larger cause — civil rights. As Carlos told me in a 2003 interview “A lot of the [black] athletes thought that winning [Olympic] medals would supercede or protect them from racism. But even if you won a medal, it ain’t going to save your momma [from the effects of racism] It ain’t going to save your sister or children. It might give you 15 minutes of fame, but what about the rest of your life?”

Carlos’ attitude resonates because we still live in a world where racism is evident. If Hurricane Katrina taught us nothing else, it’s that for every Barack Obama and Condoleezza Rice, there are many communities from New Orleans to South Central Los Angeles where poverty on one side and racism on the other create a crushing vice on black Americans.

It also resonates because Smith and Carlos used the ubiquitous platform of sports to make their stand. Today, sports is a global, multi-trillion dollar business that, thanks to cable television, the Internet and corporate sponsorship, is vastly more influential than four decades ago. Yet the idea that today’s athletes would use their hyper-exalted- brought-to-you-by-Nike platform to speak out against injustice seems almost unthinkable. Athletes like Etan Thomas of the National Basketball Association and Scott Fujita of the National Football League have spoken out on war, poverty, and racism in the United States. Some platinum-plated stars on the U.S. Olympic basketball team — notably Kobe Bryant and Lebron James — have raised concerns about China’s connection to the genocide in Darfur.

None of this, however, comes close to matching the audacity of Smith’s and Carlos’ moment at the 1968 Olympics. It does serve to remind us of a time when even the world of sports wasn’t immune to the politics of protest. And as Jonah Goldberg’s column demonstrates, it still holds the power to upset all the right people.

Dave Zirin, sports correspondent for The Nation magazine, is the author of A People’s History of Sports in the United States (The New Press), which will be released Sept. 3 at the Brecht Forum (See Community Calendar). He blogs at edgeofsports.com.

For more information on the Olympics, see the following articles in The Indypendent:

Guide to the Olympics