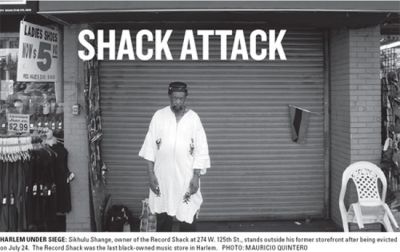 Record Shack speakers that once played African music onto the sidewalk across from the Apollo Theater in Harlem are now stored in a Yonkers warehouse.

Shange has fought his eviction since February when his landlord, The United House of Prayer, refused to renew his lease. During this same time he helped lead protests against Mayor Michael Bloomberg’s rezoning plan for 125th Street. The City Council approved the plan in March. Since then, real estate values along Harlem’s main business corridor have dramatically increased and long-time tenants like Shange are being forced out.

On July 24, Shange returned to his storefront at 274 W. 125th Street, less than an hour after a Manhattan Housing Court judge upheld the eviction order for the business he operated for 41 years.

“The city marshal was right behind me and told me to close the store,” Shange said. “Then the landlord’s brokers said, ‘we have a truck arranged to move your stuff.’”

Within about two hours, Shange said his records, CDs and cassette tapes of oldies, contemporary hits, gospel, jazz, and music from Africa and the Caribbean islands were packed up by a fleet of workers who took no inventory of the property he estimates is worth $200,000.

“They told me to take whatever personal stuff I have and leave,” Shange said.

The Record Shack was the last black-owned music store in Harlem.

“People came to the Record Shack to feel the ambiance of the Harlem community,” Shange said. “All that is going to be jeopardized.

”More than a business, his store was a cultural outlet, a tourist attraction and an anchor when the world-famous community went through hard times.

“The battle now is to get the goods back,” Shange said.

He said the brokers hired by the United House of Prayer want him to pay $12,000 for the moving and storage of the store’s inventory. He estimates moving it back to Manhattan could cost as much as $3,000. If he does not retrieve it within 30 days of his eviction, he said the items could be put up for auction.

The weekend after the eviction, Shange joined nearly 20 members of the Coalition to Save Harlem in front of what used to be the Record Shack and passed out fliers calling for support of the store. Many passersby stopped to ask what had happened, and said they opposed the landlord’s decision. The coalition is planning a town hall meeting, but no date has been set.

Shange also met with Council member Charles Barron (D-Brooklyn) and reached out to State Senator Bill Perkins (D-Manhattan), but said nothing has been worked out to help him retrieve his property.

His landlord refuses to comment on plans for the storefront. The awning that once displayed the Record Shack’s name is now painted over.

“It is an onslaught,” Shange said. “They feel they have the upper hand.”