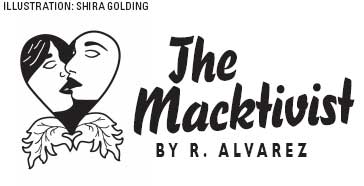 I really dig the “getting caught” thrills of having sex in public, but I don’t know what book the law will throw at me if I am caught. I already have an arrest on my record from the Republican National Convention so I want to be informed as to the laws surrounding public sex.

Hi TSFBD,
Glad you’re out there doing God’s kinky work in the bushes. I’d like to briefly note that finding one’s sexual rights online is a convoluted journey full of erection-killing mugshots and limp, dead links, so cheers for a good challenge! The Woodhull Freedom Foundation and the National Gay and Lesbian Task Force are overdue on formulating the Sex Laws Database, designed to help with such a question. Until then, the reproachful state-controlled Public Law Database is all we plebs get (in New York: public.leginfo.state.ny.us).

What you’re asking about is a sex offense, as opposed to sexual misconduct (which involves minors, dead people and animals — lord have mercy if they catch you with an underage mink stole). A sex offense may be considered obscenity in the second or third degree or an A-E non-violent felony. More charges can be piled on based on the arresting cop’s disposition, such as a sodomy charge (the Supreme Court’s 2003 ruling overturning a Texas sodomy law only applies to consenting adults in private). It’s not likely, but if the state is in a cruel mood, they can have you register with the National Sex Offender Registry.

A sentence on a clean record can run anywhere from zero to 30 days in the clink and will generally carry a fine of $250 to $500. If you want to keep track of your state’s terrifying sex offender laws, do a search on the state assembly’s webpage for “sex” (assembly. state.ny.us in New York). The U.S. Department of Justice links the act of public sex to drug use, assault and robbery, and homosexuality, so if you qualify in any of these categories, it’s possible that the police will come down even harder on you. It makes a difference whether your Republican National Convention arrest was violent or non-violent, so I can’t say for sure what you could get slapped with — but I do think you now need to err on the side of caution.

The safest option for you is to simulate getting caught; the next-best option is to cut down your chances of being caught using the suggestions below. TSFBD, you seem like an intelligent pervert, so I hope you agree that a little pre-planned caution can still feel spontaneous and sexy.

Before anything else, I want you to let your partner know that getting caught is your m.o. so they know what they’re signing up for — besides, they may have better ideas than me on how to push your big red button.

1. Consider who will be catching you. When choosing a location, consider that it’s better to be caught by someone slowmoving, like an aging church deacon or a store mannequin; their cop-dialing reflex is slower than most. If suspension of reality is something that’s in your sexual superhero toolbelt (and man, do I think this is the best option for you) have a (possibly costumed) friend “stumble upon you.”

2. Choose a spot where getting caught is likely and flight is easy. For example, don’t get sighted in the middle of a deserted golf course, but rather in the front seat of your car in an Ikea parking lot.

3. Set up a look out. Have a nearby lookout text message you if someone’s coming. Repay them by texting to let them know you’re coming.

4. Reduce the charges and chances. If you still need to do it without a safety net, don’t philander drunk, high, with a stolen purse in your lap or with a dead person; this will only enrage the police more. Also, don’t do it near the end of the month when cops have quotas to fill.

5. Get seen, not caught. Consider whether the rush you’re after is the danger of being caught or the enjoyment of being seen. If the latter rings true, work on your indoor tan after researching a friendly local sex party. And enjoy yourself.

Email your sex-related questions to sex@indypendent.org.