In 1967, the year before riots and unrest brought France to the edge of revolution, Raoul Vaneigem, a key member of the Paris-based Situationist International, wrote: “People who talk about revolution and class struggle without referring explicitly to everyday life, without understanding what is subversive about love and what is positive in the refusal of constraints, such people have corpses in their mouths.”

Forty years later, no one can accuse the CrimethInc. Collective of having corpses in their mouths. Their latest book, Expect Resistance, is a passionate call for readers to see revolution as a daily event, rather than as an abstract idea that may never be realized. 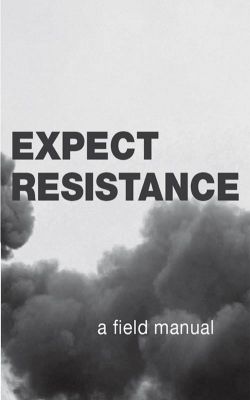 Expect Resistance follows Recipes for Disaster: An Anarchist Cookbook and Days of Love, Nights of War in developing the CrimethInc. philosophy of liberated living and fiery opposition to capitalism and injustice. Like CrimethInc.’s others works, Expect Resistance is beautifully presented, illustrated with everything from drawings of a post-apocalyptic world, to fake New York Times covers to actual photographs of fence-smashing demonstrations. The self-described “decentralized anarchist collective” lists no author names on its publications to give credibility to the idea of collective action.

One half of Expect Resistance, printed in red ink, is a fictional narrative that follows Marshall, Pablo and Samia as they leave their conventional lives and jobs to pursue a life of radical activism. The three meet during an occupation of a university, protesting both sweatshop labor and the working conditions of low-paid university workers. They go on to fall in and out of love and confront capitalism and injustice head-on.

These fictional episodes alternate with chapters printed in black ink covering CrimethInc. theory. While critics may deride the CrimethInc. model as “lifestyle anarchism” (as opposed to the more politically rigorous “social anarchism”), these theoretical sections successfully bridge the gap between the personal and the political. Everything from different models of consensus- making to the ethics of adultery is covered here in engaging and provocative prose. What gives the book its particular force is the correlation between the fictional and theoretical sections. A chapter on “Crowd Dynamics and the Mass Psychology of Possibility” is followed by a description of a “Reclaim the Streets”-style protest where Pablo and other anti-sweatshop campaigners take over a busy road in the face of police opposition. By intertwining theory with fiction, radical political ideas become tools for immediate use.

Expect Resistance delves into the complexities, consequences and pitfalls of radical activism in a way that other celebratory books about the anti-capitalist movement (such as the otherwise excellent Globalize Liberation, edited by David Solnit) have shied away from. After the success and euphoria of the university occupation, the group of friends and allies that spawned it fall apart in an all too predictable mess of in-fighting and factionalism. In one of the book’s strongest theoretical sections, “Failure,” this recognition of imperfection is presented as a necessary and even inspiring step: “True failure, tragic and heartbreaking as it is, is proof that you’ve reached beyond yourself, that you are pushing at your own limits and the limits of the world.” Reaching for the impossible and failing becomes the perfect antidote to a culture that values the petty successes of money and careerism.

In the end, CrimethInc. tells us that it is possible to win. The “Afterward” section presents both a manifesto for Maximum Ultraism, where ultraists “wage a life-and-death war against consensus reality” (injustice that only exists with the consent of the majority) and a portrait of a post-capitalist world where grocery stores are replaced with gardens and cough syrup with licorice root. Even if none of this happens, the book declares, “we will have the adventure of our lives.” Expect Resistance presents an ideal reminder for jaded activists that a life of opposition does not have to be a life of frustration. And while not every reader will have the luxury or opportunity to become a full-time revolutionary like Pablo, Marshall and Samia, it also reminds us that the fight for meaningful change begins on the battlefield of everyday life.