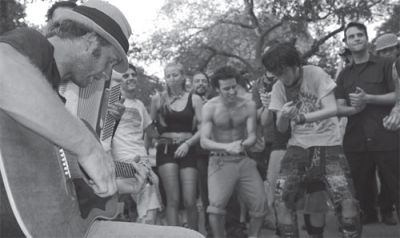 A crowd dances as the band Casa de Chihuahua plays bluegrass music at an Aug. 2 concert that commemorated the 20th anniversary of the Tompkins Square Park riots. On Aug. 6, 1988, police seeking to enforce a curfew against an encampment of homeless people living in the park launched an indiscriminate attack against the surrounding neighborhood as they battled through the night with an ad-hoc coalition of activists, punks, Yippies and squatters opposed to the gentrification that was already starting to change the neighborhood. An annual concert is held in early August to mark the anniversary of the riot and to protest continued police brutality in the neighborhood.