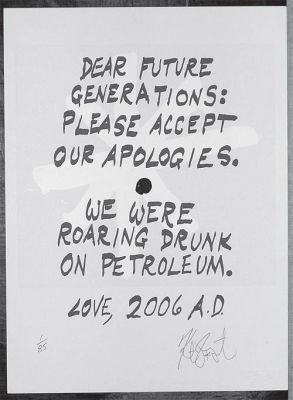 A Review of Armageddon in Retrospect By Kurt Vonnegut G.P. Putnam’s Sons, 2008

Released a year after Kurt Vonnegut’s death April 11, 2007, Armageddon in Retrospect is a collection of previously unpublished non-fiction and short stories on the theme of war and peace. Mostly written before the 1967 publication of his breakthrough novel Slaughterhouse Five, Armageddon has a hard time matching Vonnegut’s strident parting shot in 2006, Man Without A Country, whose direct authorial voice bore witness to the insanity of murdering each other and our planet.

A change had come to Vonnegut in the last years of his life. As Vonnegut’s son Mark writes in his introduction to Armageddon, “[The Iraq war] broke his heart. … It wasn’t until the Iraq war and the end of his life that he became sincerely gloomy.

”This later Vonnegut is most present in the three non-fiction pieces and his artwork in Armageddon. The first piece is a speech completed weeks before his death to inaugurate the Year of Kurt Vonnegut in Indiana. (His son Mark subsequently delivered it.) It is a condensed version of A Man Without A Country, effortless insight gift-wrapped in humor. “If anyone here should wind up in a gurney in a lethal-injection facility,” he wrote, “… your last words should be: ‘This will certainly teach me a lesson.’”

This tragicomic streak that is so definitively Vonnegut is widely attributed to his experiences as a prisoner-of-war (POW) during the saturation fire-bombing of Dresden in World War II. He was given the task of pulling the corpses of women and children from the wreckage. Speaking to the Indy Star, Mark said he thought his father never got over his war experience. Armageddon probably comes closest to giving us the terrible truth of these experiences.

Slaughterhouse Five may have dealt with Dresden, but Armageddon describes a more brutal reality. Armageddon reproduces a letter Vonnegut wrote to his father after being released from being a POW. The experiences of delousing showers, as in Slaughterhouse Five, are related, but departing from the 1967 version: “Many men died from shock in the showers after days of starvation, thirst and exposure. But I didn’t.” 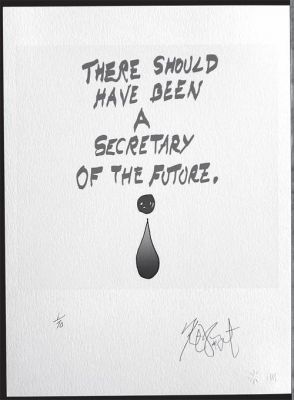 The final phrase “but I didn’t” is repeated throughout the letter every time Vonnegut witnesses death — reminiscent of the “so it goes” from Slaughterhouse Five. Although in the letter it reads less like a mantra, and more like a sigh. In Wailing Shall Be in All Streets, a biographical account and assessment of the Dresden bombing, the angrier Vonnegut re-emerges. “The ‘Get Tough America’ policy, the spirit of revenge, the approbation of all destruction and killing, has earned us a name for obscene brutality,” he wrote.

After this, the collection loses some of its visceral edge but none of its insight. The majority of the fiction afterwards was most likely taken from the period between the end of World War II and the publication of Slaughterhouse Five, when Vonnegut described himself as a hack. The Lilly Library at the University of Indiana holds rejection letters to many of the stories in Armageddon, and one from 1954 for Unicorn Trap is revealing. The story, the letter reads, is “tainted with genius, but of the madder kind,” and is brimming with too many ideas for the staid world of magazine publishing.

But this is the edifying aspect of these stories. The main plots themselves hold truth: the human impulse to war (Great Day); the allure of war for the young (Happy Birthday, 1951); the timeless nature of the powerful and powerless (The Unicorn Trap); the similarity of occupying armies (The Commandant’s Desk); technology releasing the Devil (Armageddon in Retrospect); but the tales are spun with acute observations throughout.

Take Unknown Soldier, which deals with the media furor around the first child born in the third millennium of the Christian era. This sobering piece, written later (a rejection letter from Cosmopolitan, dated 1991, exists in the Lilly Library’s manuscript collection), pillories the whole endeavor. Vonnegut poignantly writes, “It seems to me now that she was like an unknown soldier in a war memorial, a little bit of flesh and bone and hair which was extolled to the point of lunacy.

”It is these short, pithy, bon mots that gave Vonnegut his shine throughout his writing career and his talents are on luminous display here. Even after he focused on his art (the sketches in Armageddon deserve a separate review altogether), the wisdom kept flowing as in Confetti #46: “In the U.S.A. it’s winners vs. losers and the fix is on.”

Armageddon can be recommended to all who felt that Vonnegut articulated their frustrations with the world, and to those who haven’t, this is an entertaining gateway book to the rest of his work.