When Democrats gather in Denver later this month to nominate Barack Obama for president, one of the event’s main corporate sponsors will be AT&T, which will splash its brand all over the convention, right down to the 2008 Democratic National Convention totebags that will be given to all the delegates and credentialed media.

For progressives, who have watched with dismay this summer as the presumptive nominee staked out increasingly rightward positions on a number of issues, including immunity for telecoms that participated in President Bush’s domestic spying programs, the cozy partnership of Obama and the Democrats with AT&T is just one more thing to grind their teeth about.

“The Obama brand has always been about inspiration, a new kind of politics, the audacity of hope, and ‘change we can believe in,’” writes Arianna Huffington of Huffington Post. “I like that brand. More importantly, voters — especially unlikely voters — like that brand. Pulling it off the shelf and replacing it with a political product geared to pleasing America’s vacillating swing voters would be a fatal blunder.”

A more useful way to assess Obama’s politics is to take a closer look at some of the dominant forces in the Democratic Party that he has openly embraced. While it is impossible to convey all the thousands of interlocking relationships that bind the corporate center of the Democratic Party, even a small sampling strongly suggests that it will take a lot more than voting for one man for us to see real change in this country. 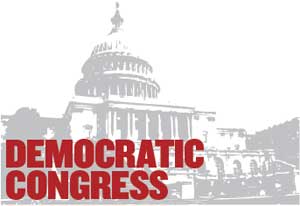 Corporate money flows through many channels to reach congressional Democrats.

Candidates raise millions from lobbyists and corporations to fill their own war chests. Prominent Congresspersons also bring in hundreds of thousands of dollars for their personal political action committees, which they use to bankroll needy colleagues in return for future favors and support. And then there’s the Democratic Senatorial Campaign Committee (DSCC) and the Democratic Congressional Campaign Committee (DCCC), which raise and spend tens of millions of dollars to help Democratic candidates. The recipients of this largesse, of course, come into office indebted to the party’s congressional leadership.

Rep. Steny Hoyer (Md.) — House Majority Leader. Top donors include JPMorgan Chase and Comcast. His Political Action Committee (PAC) has received $15,000 in donations from top execs at MacAndrews and Forbes, whose chairman, Ronald Perelman, made hundreds of millions of dollars off the 1980s-era Savings & Loan crisis.

Rep. Rahm Emanuel (Ill.) — Widely credited with helping the Dems regain the House of Representatives in 2006 as the head of the DCCC, this former Clinton aide-turned-investment banker-turned Congressional leader is known for his relentless fundraising. Top donors to his own campaign include UBS AG, Blackstone Group and JPMorgan Chase. Emanuel’s PAC has also scooped up more than $600,000 in the 2008 election cycle, mainly from the finance, real estate and entertainment industries.

Sen. Chuck Schumer (NY) — Chair of the DSCC and a powerful member of the Senate Finance Committee, Schumer is a champion fundraiser with close ties to Wall Street who led the Democratic takeover of the Senate in 2006.

Rep. Charles Rangel (NY) — Chair of the House Ways and Means Committee, which writes tax legislation, Rangel has received over $4.1 million in campaign donations since he became the committee’s new chair in Jan. 2007. Meanwhile, his political action committee has been showered with $1.04 million in contributions, much of it from New York City real estate interests.

Rep. John Dingell (Mich.) — Chair of the House Energy and Commerce Committee, this longtime Congressman has been the auto industry’s most dogged advocate for decades, fighting everything from air bags to higher gas mileage standards to the science of global warming.

Blue Dog Democrats — A coalition of 47 conservative Democratic lawmakers whom effectively hold the balance of power in the House of Representatives. They mostly represent rural or ex-urban districts in the South and the West, and support both large military budgets and cuts in social spending.

The biggest winners of the 2006 mid-term elections may have been Democratic lobbyists, many of whom team up with their Republican counterparts to work for some of America’s largest corporations.

Thomas Hale Boggs Jr./Patton Boggs: Son of a former Democratic majority leader and older brother of television journalist Cokie Roberts, Boggs was ranked as the capital’s top lobbyist in 2007 by Washingtonian Magazine. Boggs represents more than 50 corporations, trade associations and state and foreign governments, while his firm Patton Boggs rakes in $70 million per year in fees from a roster of 350 clients. Patton Boggs specializes in international trade law. Since its founding in 1962, it has participated in the formation of every major multilateral trade agreement considered by Congress.

Tony and Heather Podesta: This husband-and-wife team are both prominent Democratic Party fundraisers and each runs their own lobbying firm. Tony Podesta heads The Podesta Group which was rated the third most effective lobbying firm in 2007 by Washingtonian Magazine. His clients include Lockheed Martin, the National Association of Broadcasters and BP America while Heather Podesta & Partners represents Boeing and HSBC North America, among others.

Akin, Gump, Strauss, Hauer & Feld: Founded by former DNC Chairman Robert Strauss, Akin Gump has offices in 14 countries and provides both lobbying and legal services to its blue-chip clients. It has given more than $2 million to the Democrats in this election cycle.

While the Obama campaign has had unprecedented success with raising small donations through the Internet, it is also getting a friendly reception from big business interests.

While presidential elections are official contests between two candidates and their respective parties, they can also be seen as battles for supremacy among different sectors of the economy. The Republicans are running strongest among resource extraction industries located in the interior of the country, while the Democrats’ financial base is centered in the finance, real estate and insurance industries and blue-chip corporate law firms. Here are how the candidates are faring as of July 28, according to the Center for Responsive Politics. 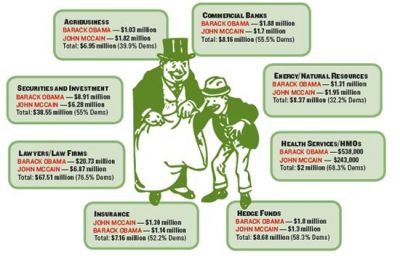 Campaign finance laws now restrict individual campaign donations to a single candidate to $2,300 in the primaries and another $2,300 in the general election. This has given rise to “bundlers” who can draw on large social networks of well-to-do friends and colleagues. To date, Obama has raised $112 million in donations of $1,000 or more, thanks in large part to the efforts of more than 500 bundlers who have each collected contributions totaling $50,000 and up. Top bundlers who have raised more than $500,000 for Obama include: hedge fund executive Orin Kramer; Robert Wolf, President of UBS Investment Bank; healthcare investor Alan Solomont; entertainment mogul Jeffrey Katzenberg; and Bill Kennard, Clinton-era Chairman of the Federal Communications Commission, who is now a managing director of the Carlyle Group.

Wal-Mart has given more to Democrats than ever before this election cycle — $565,500, or 43 percent of its total contributions — when counting both PAC contributions and individual donations, according to the Center for Responsive Politics. In 2006, Wal-Mart hired longtime Democratic Party operative Leslie Dach to lead its public relations offensive against critics of its labor and environmental policies.

These gatekeepers of conventional wisdom have close ties to corporate interests and advocate a dominant role for the US in world affairs.

Robert Rubin: Treasury Secretary and top economic advisor in the Clinton administration, Rubin was the architect of the financial deregulation that set the stage for the subprime mortgage crisis. Days after leaving office in 1999, Rubin took a $15 million- per-year job at Citigroup, one of the main beneficiaries of his deregulatory zeal. More recently, Rubin founded the Hamilton Project, a centrist think tank that advises Democrats on economic issues. He is also co-chair of the Council on Foreign Relations.

Jason Furman: A champion of free trade and Wal-Mart’s low-wage business model, Furman was chosen by Robert Rubin to head the Hamilton Project in 2006. In June, Obama named him to head his economic policy team, much to the dismay of unions and liberal activists.

Sam Nunn: Former head of the Senate Armed Services Committee, Nunn is Co-Chair of the Georgetown Center for Strategic and International Studies, a bastion of hawkish foreign policy elites from both parties. Nunn is currently a top foreign policy advisor to Obama and is frequently mentioned as a possible vice-presidential nominee. Nunn serves on the board of ChevronTexaco and is a partner in King & Spaulding, a giant Atlanta law firm with extensive dealings in the Middle East.

David Boren: He chaired the Senate Select Committee on Intelligence before retiring in 1994. His top aide and protege George Tenant went on to lead the CIA under Presidents Clinton and Bush, famously providing the “slam dunk” evidence for going to war with Iraq. Like Nunn, Boren serves as an Obama foreign policy advisor. His son Dan Boren is an Oklahoma Congressman and one of the leaders of the conservative Blue Dog faction that holds the balance of power in the House.

James R. Jones: Think Obama will renegotiate the North American Free Trade Agreement (NAFTA)? Ask this former Oklahoma congressman and D.C. insider who helped shepherd NAFTA into existence as Clinton’s Ambassador to Mexico from 1993 to 1997. Since leaving office he has served as the head of the U.S.-Mexico Business Commission, sat on a half-dozen corporate boards, and teamed up with former DNC Chair Charles Manatt to launch a company that helps foreign investors enter the Mexican and Latin American markets.

Lee Hamilton: This former Indiana congressman has been a go-to guy for “bipartisan” foreign policy solutions since he helped bring Congress’ investigation into Ronald Reagan’s role in the Iran-Contra scandal to an early end in 1987. Hamilton was appointed by President Bush to be the top Democrat on the 9-11 Commission and he was also co-chair of the Iraq Study Group. He currently heads the Woodrow Wilson Center for International Studies and is a director of the National Endowment for Democracy, which provides training and assistance to U.S.-friendly political candidates around the world.

Tom Daschle: Daschle was the Senate Majority Leader in 2001-2002 when the Democrats signed off on the USA PATRIOT Act and the Iraq War. Former staffers of his are prominent in the Obama campaign including Denis McDonough, who is Obama’s top foreign policy advisor. Daschle is currently ensconced as a senior fellow at the Center for American Progress, while his wife Linda Daschle, is a top lobbyist for the airline industry and has recently broadened her business into rail and telecommunications as well.

Vernon Jordan: Former civil rights leader, legendary for being the Clintons’ favorite black friend, Jordan sits on numerous corporate boards, is a partner at Akin & Gump, senior managing director at the investment bank Lazard & Freres and was a member of the Iraq Study Group.