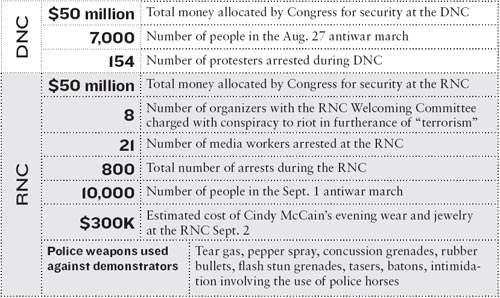 This year’s national political conventions were a magnet for everyone from corporate fatcats and the politicians they fund to protesters clamoring about the failures of the Bush administration and the two-party electoral system. According to estimates from the watchdog group Public Citizen, some 175 companies gave more than $115 million to help pay for the rock concert-like conventions. While the media focused on the carefully staged, four-day-long informercials for Barack Obama and John McCain that took place inside the conventions, protesters in the streets of Denver and St. Paul found themselves face to face with a lavishly funded police state, while both parties turned a deaf ear.

HECKLERS!
Did you hear? Acceptance speeches by both Sen. McCain and Gov. Sarah Palin were disrupted by demonstrators who stood up and yelled distinct messages in the Xcel Energy Center, only to be detained quickly and escorted out by event security. 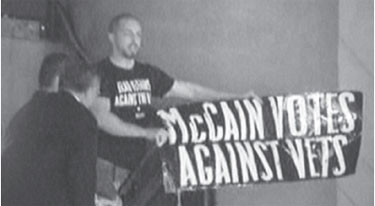 • Adam Kokesh, a 26-year-old member of Iraq Veterans Against the War and former U.S. Marine Corps sergeant, held up a sign at the beginning of McCain’s speech Sept. 4 that read, “McCain Votes Against Vets,” and then yelled, “Ask him why he votes against vets!”

• Medea Benjamin and Jodie Evans with the women’s peace group CODEPINK interrupted Gov. Palin’s Sept. 3 address. The ladies adjusted their clothes to reveal pink slips that read, “Palin is not a woman’s choice,” and stood at the side of the stage for about a minute while yelling, “Women say no to war!” and “Women need a vice-president for peace!”

The GOP vs. Community Organizers
When Republicans weren’t denouncing Barack Obama as an “elitist” and “too cosmopolitan,” they were ridiculing him for working as a community organizer on Chicago’s economically devastated South Side during his first three years out of college. This is what was said:

“On the other hand, you have a résumé from a gifted man with an Ivy League education. He worked as a community organizer. What? [Laughter] … I said, ‘Okay, Okay, maybe this is the first problem on the résumé.’”—Former New York City Mayor and Republican presidential candiate Rudy Giuliani

“I guess a small-town mayor is sort of like a community organizer, except that you have actual responsibilities.”— Republican vice-presidential candidate Gov. Sarah Palin

“Community organizers work in neighborhoods that have been hit hardest by the failing economy,” Raskin wrote. “The last thing we need is for Republican officials to mock us on television when we’re trying to rebuild the neighborhoods they have destroyed.” 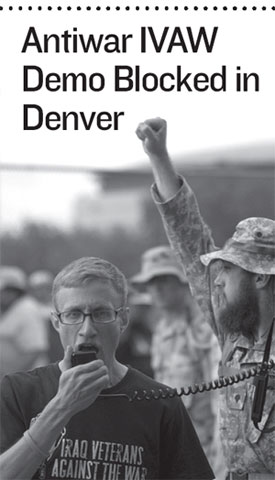 About 100 members of Iraq Veterans Against the War (IVAW) led a 7,000-person antiwar march toward the Pepsi Center during the third day of the Democratic National Convention (DNC). IVAW attempted to deliver a folded flag and a letter calling on Senator Obama to endorse immediate withdrawal of U.S. troops from Iraq, full veterans benefits and reparations for the Iraqi people. Blocks away from the DNC, the march was stopped by at least 100 riot police officers. Eventually, one member of the IVAW was allowed to pass through police lines to meet with representatives from the Obama campaign. The protest was by far the largest that took place during the DNC.

…And Then They Came for the Journalists
While most of the journalists who came to St. Paul for the Republican National Convention were safely ensconced inside the Xcel Energy Center, those who ventured outside faced a fate even worse than listening to Rudy Giuliani’s keynote speech. At least 21 media workers were arrested before and during the RNC, including Democracy Now host Amy Goodman producers Nicole Salazar and Sharif Abdel Kouddous (who was arrested twice). Also arrested were journalists from the Associated Press, New York Post, the St. Paul Pioneer Press, Indymedia and other media outlets.

Journalists and protesters gathered at St. Paul City Hall Sept. 5 to present more than 60,000 letters to Mayor Chris Coleman and prosecuting attorneys, demanding that all charges against journalists be dropped.

“From the pre-convention raids to the ongoing harassment and arrests of journalists, these have been dark days for press freedom in the United States,” said Nancy Doyle Brown of the Twin Cities Media Alliance.

“Tragically, there are stories that the world needed to hear this week that will never be told,” Brown said. “They won’t be told because reporters working on them were sitting in the back of squad cars, were stripped of their cameras, or were face down on the pavement with their hands cuffed behind their backs.”

Check out the IndyBlog for The Indypendent’s full coverage of the DNC and RNC.