In the summer of 2007, Muhammed Fakir Shahada was looking for a New York City middle school for his daughter Serena, who was about to enter the sixth grade. After attending a fair for new middle schools that summer, Fakir, who wanted his 12-year-old daughter to learn Arabic, which most of his family speaks, settled on the Khalil Gibran International Academy (KGIA), the city’s first dual-language Arabic public school, then located in Boerum Hill, Brooklyn.

By the end of the school year, Fakir regretted his decision. “I kept telling my kid that [the school year] was going to get better, but it got worse,” he says. A year later, Fakir has pulled his daughter from KGIA, and this September Serena began seventh grade at a different school.

Designed to be a beacon of multiculturalism, KGIA was surrounded by controversy from its inception (see below). Parents, students and educators say that inadequate classroom resources, an unresponsive school administration, lack of support from the New York City Department of Education (DOE) and teacher firings pushed the school to the brink of failure. 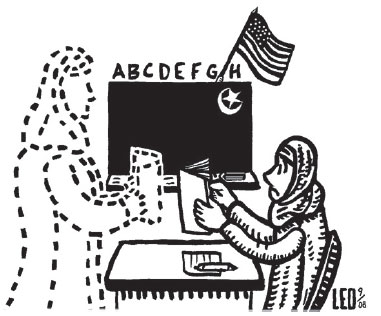 A group called Communities in Support of KGIA (CISKGIA) released a letter Sept. 2 charging the school was opening the 2008 school year “without its full Arabic language instruction, effective leadership, or any of its five original teachers or its social worker.”

CISKGIA, which describes itself as a coalition of “individuals and organizations from a multitude of communities and backgrounds,” had sent a letter to Mayor Michael Bloomberg and New York City School Chancellor Joel Kline last June lamenting the fact that many parents “are already pulling our children out of the school or are thinking of not returning next year” and noting that discipline problems among students caused by a poor learning environment “continue to go unaddressed.”

The June letter was also critical of the school’s leadership for “not exhibiting a commitment to the mission” of teaching Arabic language and culture: “Arabic language instruction has decreased to a little over two hours a week. We have seen little appreciation of Arabic language or culture within the school. There has not been a single cultural event where parents were invited to participate, and there are very few opportunities for our children to receive instruction about the culture.”

This was not how it was supposed to be. “Having an institution that teaches our kids Arabic is very important. … This school is an opportunity for the enfranchisement of the whole community,” says Mona Eldahry, the founding director of Arab Women Active in the Arts and Media (AWAAM).

Mayor Bloomberg has continually praised the school, telling the New York Times that “having an Arabic dual-language school is a really important thing down the road. We need Arabic speakers in this city.”

But families of KGIA students say the city has let the school go down the drain.

“I [don’t want KGIA] to fail because I feel like if the school fails, it’s a failure to the Arabic community. … I really don’t want to see racist people succeed … in putting us down,” says Fatin Jarara, 19, a Brooklyn College education major who was on KGIA’s design team and whose sister attended KGIA.

“Why did [the DOE] even accept [KGIA] if they were just going to turn their backs on us?” Jarara says.

The student body has changed as the school enters its second year. School supporters say many of the 58 original students have not returned, and the DOE did not return calls inquiring about how many students have failed to return.

Newspaper reports indicate that enrollment has increased from 60 to 90 students, as the sixth-grade-only school has expanded to include seventh-graders, but it’s still below its capacity of 120.

Arguably KGIA’s biggest problem last year was the lack of a stable administration. After a brief interim principalship, the city hired Holly Anne Reichert as principal in January 2008.

Supporters of the school say she is unqualified to head the school as she knows little Arabic. They also say she has presided over the continuing deterioration of KGIA.

During a July 31 press conference, Deputy Mayor Dennis Walcott defended Reichert and KGIA saying, “Just because [someone] cannot speak a language of a dual-language school doesn’t detract away from the purpose of that school.”

As for the firings, AWAAM says that the five original teachers and social worker were terminated without cause. Some supporters charge that the teachers may have been fired because they were critical of the school’s performance.

Fakir says he has tried to contact Reichert about the firings, but has received no answer. “The school’s response to everything [is that] they don’t give an answer, and they brush the parents off,” Fakir says.

Critics say that near the end of KGIA’s first school year, the DOE, in a closed door meeting with no parental input, decided to move the school to a new location in Fort Greene, Brooklyn, away from public transportation and Arab-American communities.

“The new site for the school was determined based on available facilities close to the area where the school was located for the first year,” says Melody Meyer, a deputy press secretary for the DOE, adding that the original location was “temporary” and the new location will serve students better.

Khalil Gibran International Acadamy (KGIA) was the brainchild of New Visions for Public Schools, a nonprofit group that specializes in education reform. After the organization met with the Department of Education (DOE), the city’s immigrant affairs office and Arab-Americans in Brooklyn, Debbie Almontaser, a veteran New York City educator and interfaith community activist, was the leading choice to spearhead implementation of KGIA.

Chosen as the school’s founding principal, Almontaser put together an ethnically and professionally diverse team to help design the school. Almontaser says the goal was to get students to “see themselves as part of a bigger world.”

But she was forced to resign a few weeks before the school opened due to a mediasparked controversy touching on issues of terrorism and radical Islam.

Named after Lebanese-American poet Khalil Gibran, the school was quickly attacked after plans were publicly announced Feb. 12, 2007. Soon after, blogs and other media outlets, led by neoconservative author Daniel Pipes, started to attack the Brooklyn-based program. Pipes, director of the Middle East Forum, a think-tank that fights “radical Islam, whether terroristic or lawful,” also joined the advisory board of the “Stop the Madrassa Coalition,” which attempted to paint the school as a breeding ground for radical Islam.

In an article in the New York Sun entitled “A Madrassa Grows in Brooklyn,” Pipes claimed that KGIA would be “laden with pan-Arabist and Islamist baggage.” (KGIA planners said the school has never planned to teach the practice of Islam). Pipes said that Almontaser “has a record of extremist views” and that she implied “Arabs or Muslims … are innocent of the terrorist attacks of September 11, 2001,” taking out of context Almontaser’s remark that “I don’t recognize the people who committed the attacks as either Arabs or Muslims.” She went on to say, “Those people who did it have stolen my identity as an Arab and have stolen my religion.”

The intense media focus on KGIA peaked when the New York Post picked up the story. The DOE pressured Almontaser to agree to an interview with the Post. In an Aug. 6, 2007, article, the Post declared that Almontaser “defended” the use of the word “intifada” on a t-shirt made by Arab Women Active in the Arts and Media (AWAAM), a group whose only connection to Almontaser was that she was on the board of a Yemeni-American organization that at times shared office space with AWAAM.

On Aug. 9, Deputy Mayor Dennis Walcott, following what Almontaser says was a directive from Mayor Bloomberg, forced Almontaser to resign as KGIA principal, saying that either she or the academy had to go.

“That was the most horrendous and devastating 24 hours of my life,” Almontaser says. “To experience working with people who admired me and respected me and who believed in me, and then just to see a complete shift, basically saying that ‘you’re the problem’ … was absolutely devastating.”