Most news from Venezuela in the United States comes filtered through the lens of our radical right wing corporate press. Through osmosis, American progressives can be heard repeating the corporate mantras like catechisms: it’s all about president Hugo Chavez, he’s against the unions and free speech, he just wants power. 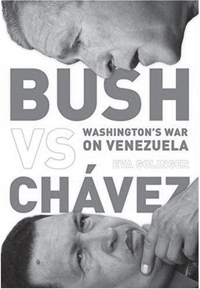 The transformations taking place in Venezuela are often discussed without history or context, and Chavez himself is often reduced to the face of a power hungry state or — not much better — a petty dictator with a mild penchant for reform. Eva Golinger’s Bush vs. Chavez incinerates all of this semi-informed fluff and lays bare both the U.S.-led propaganda factory that constructs it and the specifics of U.S. covert operations against Venezuela.

This is Golinger’s second book on U.S. covert operations against Caracas, and she continues to crack the code with gusto. Drawing on everything from Freedom of Information Act documents to corporate press clippings, Golinger exposes the benign-sounding “National Endowment for Democracy” as a U.S. State Department front organization.

She explores military maneuvers off the coast of Venezuela (against the terrorist “Hugo the Grand”) and tackles the 25-year history of certain Venezuelan unions’ participation in the United States’ war against the Sandinista revolution in Nicaragua. Partisan and hard-hitting, Golinger delivers perhaps the most comprehensive study on how Washington has been actively engaging in covert aggression against Venezuela.

Nikolas Kozloff takes a wholly different tack in Revolution!. Intent on mapping the policy transitions taking place in South America’s newly left governments (and their wavering neighbors), Kozloff includes the reader in his travels as he works to humanize the acronyms and abbreviations into conversations and anecdote, navigating a language of “dollarizations” and International Monetary Fund (IMF) concerns for the reader. 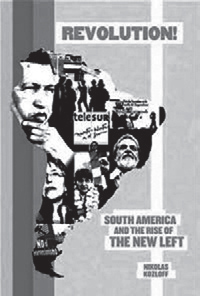 Throughout Venezuela, Bolivia, Chile, Argentina, Brazil and Ecuador, the policies evolve, overlapping and distinct, into trajectories shaped by both specific landscapes and the general crush of the U.S. empire. He illustrates public transit policy with stories about how many packed subway trains he watched go by before an empty space was available (spoiler alert: eight).

The reading can be a little odd when, for example, Kozloff’s interview with a retired Ecuadorian colonel with leftist sympathies reveals that the colonel also studied at the infamous School of the Americas. For the most part, however, the book effectively etches the complex cartography out from simple borders to rich climates and changing geographies.

While this reviewer’s lesser thirst for policy evolution was well quenched, the backstory of the very people, bureaucrats and radicals struggling to redirect an entire continent made Revolution! worthwhile. For such an ambitious undertaking, the reader is well-rewarded.