More than 300 New York City high school students spent part of their summer vacation in New Orleans with the youth-led organization, the New York 2 New Orleans Coalition (NY2NO). They participated in rebuilding, yard work, building gutting and community organizing. NY2NO has led nine brigades to New Orleans since February 2008, not for students to have a “Jimmy Carter experience” as one trip participant put it, but rather as a way to get fellow students involved in combating injustices within our own country.

“[During the trips] the students are exposed to an overwhelming amount of information which completely contradicts everything they thought or had heard from the media,” says Alexandria Jackman, 16, a junior at The Beacon School in Manhattan’s West Side. “Ideas, thoughts, and realizations begin to bubble in the student’s minds.”

For most students, the New Orleans trips are transformative. Many students return to New York City infuriated, after experiencing blatant racism and hearing disturbing things, such as one resident passionately describing feeling that “their government wanted them to die.”

“They [the students] think that they have been lied to their whole lives or that everything is so messed up,” Jackman says. “The students’ perspective on all of their surroundings changes, and they become suddenly dissatisfied with the world they live in.”

I went on my first New Orleans brigade with a team with The Beacon School in 2006. The first two trips were run by teachers at my school, connected to The Beacon School’s Community Service Program and Katrina Class. The adults in the project had ultimate control, although students were active trip cocoordinators. 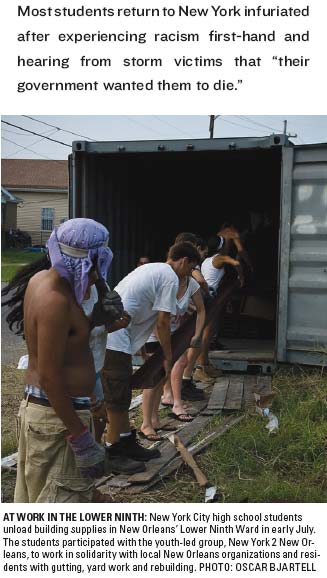 Many of us realized after traveling to New Orleans in the Beacon program that we needed a group that brought together youth from across New York City, free from the usual administrative power of teachers and principals. As a result, NY2NO was formed by several Beacon School and Laguardia High School students as a youth-led organization that could organize New Orleans trips over school breaks. Quickly the network has grown to include high school students from across the city interested in organizing and mobilizing around the parallel struggles of New Orleans and their own communities. As student organizers, we plan and run the trips and events by ourselves.

“For the most part, adults work closely with us for legal reasons,” says fellow organizer Cory Meara-Bainbridge, 17, a senior at Beacon. “Chaperones [on our trips] are persons over 21 who are ‘supervising’; however, they basically are members of the groups going through the same experience as the students.”

Most of my own organizing skills have come out of New Orleans trips with the New Orleans Survivors Council (NOSC), the organization we work with doing gutting, yard work and community organizing. Teenagers on our trips “canvas” with NOSC, a method of organizing that was used by student organizers such as the Student Non-Violent Coordinating Committee (SNCC) during the civil rights movement. “We talk to endless numbers of people, encouraging them to go to [New Orleans Survivors Council] meetings and let their voices be heard,” says Jackman, who is also an NY2NO organizer.

Using methods fostered by NOSC, New York students learned to confront racism by encouraging students with darker skin to speak first when canvassing in predominantly poor black neighborhoods in New Orleans, in an effort to project an image of empowerment in areas where fewer leadership roles are filled by black youth.

Back in the city, NY2NO encourages student leadership in a similar way in order to combat the “adultarchy” created when young people are often discredited and disregarded by older people.

“Often adults have a hard time accepting youth leadership,” says Meara-Bainbridge. “It is important to have a strong support system of adults who agree with us. However, the student organizers always have the last say on decisions and the adults that we ask for advice trust us to make those decisions.”

NY2NO is working to create an alternative form of education in which everybody is actively learning from each other. Our trips to New Orleans are not a classroom environment where the teacher oppresses the student and the student, by forfeiting power to the teacher, also dehumanizes the teacher. We want everybody to be a part of discussions and to teach. For example, all our organizing meetings, trip-debriefs and reportbacks are run in the form of a people’s circle. In the circle, nobody is in a position of power and it encourages the group to think and feel together.

We also use consensus decision- making procedures, a process that amplifies the voice of all participants, where we all feel co-responsibility because we are solving problems that affect us and no decision can be made without the consent of everybody in the group.

“In our country, its accepted that just because you agree with Obama’s general opinions you allow him to make decisions,” Meara-Bainbridge says, “Our alternative provides a way so that everybody is active in deciding; it allows room for growth as an active participant in the decisions being made that directly affect you.”

Many students who have returned to New York City after completing a NY2NO trip this summer are excited to continue working for change. We are now trying to apply the organizing skills we learned in New Orleans to fight injustice in our own city.

“NY2NO is dealing with public housing issues, gentrification and homelessness,” Jackman says. “NY2NO is working to combat classism and racism in both cities and through this move toward an egalitarian society.”

With other organizations, including Picture the Homeless and New York Solidarity Coalition with Katrina and Rita Survivors, Jackman helped organize the Aug. 29 solidarity march through the Lower East Side and Chinatown to raise awareness about the parallels between New York City and New Orleans. NY2NO plans to continue collecting humanitarian aid and donations to be sent to New Orleans after Hurricane Gustav.

“We are all attempting to raise awareness of the state of New Orleans three years after the storm,” Jackson says, “and how some of these key issues are prevalent here in our own city as well.”

For more information on the current state of New Orleans, check out Jordan Flaherty’s article in this issue of The Indypendent.