Some of New York’s hardest working environmentalists don’t do it for cleaner streets, clearer skies, or to reduce oil consumption — they do it to survive.

Every morning, Karl Zatorski, a 68-yearold retiree on the Lower East Side, picks through neighborhood trash bins for bottles and cans that can be redeemed for 5-cent deposits. By the end of the day, he says, he earns between $25 and $35, a major supplement to the meager $583 he collects each month from Social Security.

“People say, ‘you’re not the guy I’d expect to be recycling,’ and I’m not,” says Zatorski. “The reason I recycle is because I have to. I need to eat.”

Zatorski’s bounty has decreased over the years. Non-carbonated beverages such as bottled water, iced tea and sports drinks — a minute fraction of the industry when New York State enacted its bottle-deposit law in 1982 — now make up 30 percent of the beverage market. As New York doesn’t require deposits on those bottles, it has also caused increased litter and billions of bottles being trashed rather than recycled. According to the New York State Department of Environmental Conservation (DEC ), three billion non-carbonated beverage containers go into the trash each year. 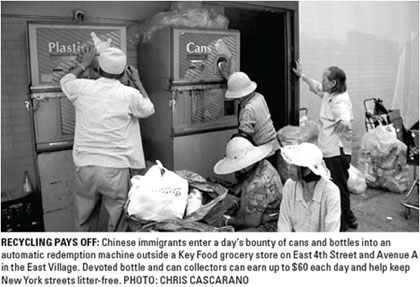 Environmentalists may be closer than ever to changing this.

For the past six years, several environmental groups have been prodding Albany to pass the “Bigger Better Bottle Bill.” It would expand the state’s Returnable Containers Act to require deposits on all glass, metal and plastic beverage containers, not just beer and soda bottles and cans. It would also funnel money from unclaimed deposits to the state Environmental Protection Fund.

The bill has been passed several times by the Democratic-majority state Assembly and endorsed by Gov. David Paterson, but has never received the okay from the Republican dominated state Senate. Beverage companies, grocers and consumer advocates who fear price increases have lobbied against the bill.

Next year may be different. One of the bill’s staunch opponents, Senate Majority Leader Joseph Bruno (R-Rensselaer), left office in June. His replacement, Sen. Dean Skelos (R-Nassau), may be more sympathetic. And the Democrats are two seats away from a majority in the Senate.

“I think Senator Bruno was too entrenched in his position on the bill to let it pass,” says Laura Haight, senior environmental associate at the New York Public Interest Research Group. “But it has become apparent that it is possible to pass the bill with Senator Skelos in office.”

Skelos’s office said they have not begun hashing out the bill’s details yet, but are open to negotiations. “What we’ve said is that sides should come together to develop an approach that balances the interests of the environmental community and that of consumers who are faced with ever-increasing costs,” says spokesperson Scott Reif.

One possible negotiation could be requiring deposits on only some bottles and cans other than beer and soda, such as just water bottles, a step some other states have taken. Of the 11 states that have bottle bills, Delaware, California, Connecticut and Maine include at least water bottles in addition to carbonated beverages.“A compromise has obviously never been what we want,” says Haight, “but it could be a good first step. Water bottles take up some 60 percent of the non-carbonated beverage market.”

One group opposing the bill is an organization of grocers and beverage companies, New Yorkers for Real Recycling Reform, which sees better curbside recycling as the solution for litter. The group’s website cites probable price increases and the “inconvenience” of storing and carrying empty bottles, and says the bill may not do much for the environment.

Since the Returnable Container Act’s enactment 26 years ago, collectors like Zatorski, the homeless, immigrants, and the just plain thrifty have taken advantage of the bill to make a little extra cash. The DEC estimates that the law has reduced roadside litter by 70 percent, prevented the production of 200,000 metric tons of greenhouse gasses, and saved 52 billion barrels of oil annually.

“It’s a no-brainer to pass this bill, in terms of its environmental benefits,” says Haight. “But the opposition is still very strong.”

Zatorski, who once used can collecting to pull himself out of homelessness, said he likes the environmental benefits of requiring deposits on more bottles, but what he likes most is the little extra cash he could make.