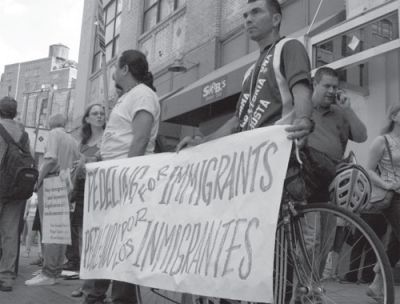 “It’s an honor for me. I am not a politician, that I can help bring attention to immigration problems,” Leiva said, who is originally from El Salvador and now works at a factory in Dallas. “I am grateful with this country that it has given me the chance to live here, but at the same time, I would like that the chance that I have received here to be given to all the immigrants who come here to live.”

Leiva joined in a rally Aug. 22 in New York City to protest large-scale immigration raids and the hate crime trial in Pennsylvania, where three white teenagers beat a Mexican immigrant to death. U.S. Immigration and Customs Enforcement has raided meatpacking factories in Iowa and Mississippi in recent months, arresting hundreds of undocumented workers and leaving their families and children in a state of fear, with their fates uncertain.