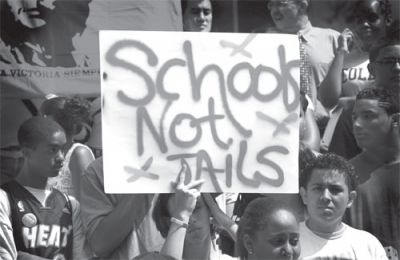 More than a hundred students, parents and educators rallied on the steps of City Hall Aug. 14 in support of legislation that seeks to reform heavy-handed policing of New York City schools. They were joined by several City Council members including Robert Jackson, Chair of the Council’s Education Committee.

The School Safety Act, which has 24 co-sponsors, would expand the jurisdiction of the Civilian Complaint Review Board to include complaints against School Security Agents (SSAs), NYPD employees who patrol the schools and have the power to frisk, search and arrest students. The bill would also require quarterly reporting by the New York Department of Education and the NYPD to the City Council on the number of incidents involving SSAs with a break down of information about students’ race, sex and disability status.

“What this bill is talking about is bread-and butter and as American as apple pie,” said Councilman Jackson (D-Washington Heights).

“We are asking for accountability and transparency,” added Councilwoman Melissa Mark-Viverito (D-East Harlem). “We want to make sure they [the police] are doing the job they are supposed to do.”

The bill was spurred by the growing trend both in New York and nationwide of student misbehavior being criminalized instead of being treated as a disciplinary matter for schools to handle.

Several high-profile cases in New York — the handcuffing of five-year old Denis Rivera for throwing a tantrum in his kindergarten class, the arrest of 13-year old Chelsea Fraser for writing “Okay” on her desk and the arrest of Mark Federman, principal of East Side Community High School, for intervening on behalf of a student who was being arrested — have captured the media’s attention in the past couple of years. However, supporters of the bill say these incidents are not aberrations but symptomatic of a broken system.

“We are criminalizing students not for bringing guns or drugs into schools but for engaging in age-appropriate conduct,” said Damon Hewitt from the NAACP Legal Defense Fund. “This [the Student Safety Act] will change environments that are more like prisons than like schools.”

The city began to deploy NYPD School Security Agents (SSA’s) in public schools in 1998 under former Mayor Rudolph Giuliani. Since then, the number of SSAs has increased to 5,200, making NYPD’s School Safety Division the fifth-largest police force in the country.

Many students attending Thursday’s rally said that the security that is intended to protect them is excessive and has created a hostile environment that disrupts their education.

Bryn Lopez, a senior at New York Harbor High School said he wakes early every morning to make it through the metal detectors on time for class and is frequently harassed while doing so.

“They [the SSAs] are aggressive, start problems and harass you,” Lopez said.

Currently, there is no mechanism for students or parents to report SSA misconduct, which the bill intends to change. However, the bill does not alter the chain of command that allows the NYPD, not educators, to make the final decision about whether a misbehaving student should be arrested or disciplined by the school — an issue some feel is pivotal to reforming City school security.

“We see School Safety Agents creating conflict where none needs to exist,” said Nancy Ginsberg, the Director of Adolescent Intervention and Diversion Team for the Legal Aid Society. “School Security Agents should follow the lead of the academic staff, not the other way around.”

The bill, which is supported by a coalition of more than a dozen groups including the New York Civil Liberties Union, Make the Road New York and the Urban Youth Collaborative, has not yet received the backing of Mayor Michael Bloomberg or Council Speaker Christine Quinn. The bill will need the support of 34 of the Council’s 51 members should it face a mayoral veto.