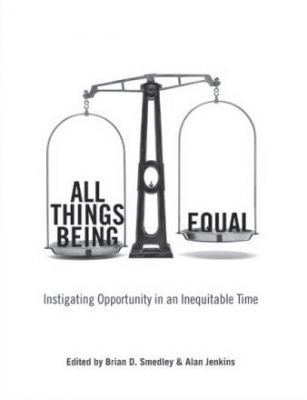 A Review of All Things Being Equal: Instigating Opportunity in an Inequitable Time Edited By Brian D. Smedley and Alan JenkinsThe New Press, 2007

Opportunity, write the editors of All Things Being Equal, is the idea that people deserve a chance to achieve their full potential. You probably agree. What’s more, you likely agree that despite lip service to the contrary, this not-so-lofty ideal is as yet unrealized.

These are hardly revolutionary conclusions, and had All Things Being Equal simply ticked off inequities it would be a book that had already been written. Thankfully, the collection is not a rehash; instead eight essays merge righteous indignation with solid policy recommendations about ways to close the gaps between those with opportunities and those without. Although much of the data has been presented elsewhere, the collection is a refreshingly straightforward look at righting wrongs.

In one particularly stark example, Darling-Hammond describes a California school in which students rely on photocopies instead of textbooks. The building is infested with vermin, there is no librarian, and the most recent encyclopedia dates back to 1988. Computers are nonexistent, art is not taught, and bathrooms routinely lack toilet paper, soap and paper towels. More than one-third of the teachers are unlicensed and half have worked at the school for less than a year. Contrast this with a school in the Connecticut suburbs in which every kid has a laptop, the building is centrally heated and cooled, more than half the teachers are tenured and cafeteria fare ranges from sushi to salad.Funding inequities are, of course, to blame for this disparity, in large part due to the linkage between property taxes and educational financing. That is, the larger the tax haul the better funded the school. It’s always been this way — with the wealthiest 10 percent of school districts spending approximately 10 times more per student than the poorest 10 percent — but Darling-Hammond reminds us that we can change educational outcomes by adopting the funding method used throughout Europe and Asia: giving every school the same amount per pupil.

Clearly, giving every kid an equal shot at education, long viewed as the best path to the middle class, would be a good start but people also need healthcare, food, affordable housing and jobs.

Marc Mauer, Executive Director of The Sentencing Project, writes about shifting the $20 billion currently spent on the “War on Drugs” to efforts that benefit communities. He also addresses the challenges facing released prisoners and suggests an investment in projects that aid reintegration.

“Building strong families and communities is the most effective crime prevention program,” Mauer writes. “Head Start and prenatal care are means of improving the health and welfare of low-income families, but also provide measurable long-term benefits and reduced crime.”

Americans haven’t talked about such things since the Great Society programs of the 1960s, but as All Things Being Equal reports, these ideas are neither out of date nor outmoded. “When our national policies have focused on strengthening opportunity through measures like Social Security, Pell grants, fair labor standards and federally guaranteed home loans, we have made great strides in improving our nation’s strength and prosperity,” the editors write.One can only hope that Congress and the new president will agree.