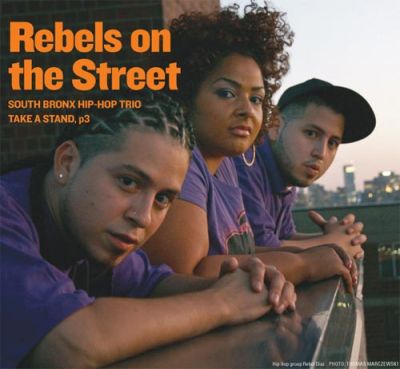 The legal struggle continues for South Bronx-based hip-hop activists Rodrigo and Gonzalo Venegas, who were aggressively arrested by New York Police Department officers June 18. The brothers, members of the popular group Rebel Diaz, said they were trying to help a street vendor on Southern Boulevard in Hunts Point who, they felt, was being harassed by police officers.

“We just kinda walked up on the situation that was happening in which the vendor was having his [fruit and vegetable] produce thrown away by the NYPD and the health department,” said Rodrigo, 27, who goes by the rap name RodStarz. “So our initial thing was to translate for the brother. He had his permit.”

Rodrigo said that at first the officers agreed, explaining that they were enforcing city health department violations. Soon after, he said that several cops became aggressive, eventually forcing them to the ground and handcuffing them.

Hip-hop activist and journalist Davey D commented on the June 18 incident on his blog, Hip Hop Daily News: “According to witnesses, when RodStarz and G1 [Gonzalo’s rap name] asked for badge numbers the police became agitated and turned around and started beating them with bully clubs [sic] and kicking them in full view of other vendors and people on the crowded street. The two were dragged off bloody, put into a police car …”

Both Rodrigo and Gonzalo, 22, have been charged with two misdemeanors — obstruction of justice and resisting arrest. The initial charge of assault on a police officer was dropped after a cell phone video of the incident taken by a friend of Rebel Diaz on his cell phone was widely released. (See: VIDEO)

After spending ten hours in a 9-by-12-foot central booking holding room with 42 other inmates at the 41st Precinct, the brothers appeared in criminal court the following day. 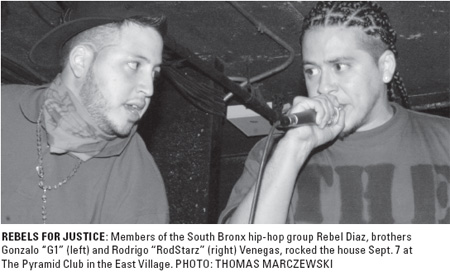 LATE NIGHT SCARE
A subsequent event complicated matters. On June 24 around 2 a.m., Gonzalo said that three NYPD police officers in full uniform invaded his East Harlem studio without knocking or a warrant. He said that with weapons drawn, the officers forced him, his roommate and a friend to their knees, put guns in their faces and demanded to know who they were, accusing them of harboring a fugitive criminal suspect. Moments later, he said that the officers departed just as quickly as they had arrived, down a side stairway adjacent to the apartment. Once Gonzalo realized what had happened, he ran after the police and was able to discern two badge numbers. The Venegas brothers called several precincts, all of which were unwilling to claim the officers; they still wonder what really happened that evening.

“The questions as to why several armed police officers mysteriously and violently invaded my home without any clear legal justification remain unanswered,” said Gonzalo in an official statement published the New York City Independent Media Center newswire on June 25. “One is left only to think that the occurrences of this morning are not a coincidence of mistaken identity, but a direct response by the NYPD to an incident of police brutality I was involved in last week in the South Bronx.”

“We feel these are modern-day scare tactics,” Rodrigo said.G1, RodStarz and Teresita Ayala (rap name “Lah Tere”) make up the hip-hop group Rebel Diaz. The Venegas brothers were raised by Chilean political exiles on Chicago’s north side, and Ayala grew up in Humboldt Park, a primarily Dominican and Puerto Rican neighborhood in Chicago. They strongly identify with a long lineage of activist musicians.

“We follow a line of musical conviction,” Rodrigo reflected, “The Nueva Canción movement in Chile. Victor Jara. Silvio Rodriguez. We come from that history of struggle, even musically. Our work is a reflection of what our roots are, which is resistance. That’s who we are.”

Rebel Diaz’s most recent song, “Bullpen Therapy,” sheds light on the politics of gentrification, which they believe fueled the June 18 incident.

“See let me break it down/Let’s keep it real simple/The vendor got harassed by the health official/The health official’s wishes were enforced by the commissioner/So the mayor and his investors can all get richer,” raps Gonzalo. Meanwhile on the track, Ayala croons an echoey, melancholic chorus: “They got me in handcuffs.”

Leah Horowitz, a criminal defense attorney with Bronx Defenders, filed for an “outright dismissal” of the charges against the Venegas brothers at their Sept. 3 court hearing. She referenced scores of letters written in support of the duo attesting to their positive work in the community. Judge George Villegas adjourned the hearing and set the next date for Dec. 16.

“Definitely for us, our home base is the SB, and that’s where we’re doing all our organizing work, Hunts Point, the poorest congressional district of the United States,” Rodrigo said. “Whatever the results of this case are against us, I think that we’re ready to stick to what is just and what we feel is right, and we have to help our vendors.”