The city of New Orleans — and much of southern Louisiana — was evacuated for Hurricane Gustav just days after the anniversary of Katrina Aug. 29. As residents packed their bags yet again, many feared a new wave of devastation in a city that has only begun to recover from the previous storm. As New Orleans and hurricanes once again share headlines, this moment offers an opportunity to examine how three years of disastrous federal, state and local policy have affected the people of New Orleans.

Several organizations have released powerful reports around the Katrina anniversary, examining the current state of the city. For those who have heard only uplifting stories about the city’s recovery and see the orderly evacuation for Gustav as evidence of positive steps forward, the facts on the ground offer an urgent reminder of the ongoing disaster.

According to a study by PolicyLink, 81 percent of those who received the federally funded, state-administered Road Home grants had insufficient resources to cover their damages. Road Home applicants on average fell about $35,000 short of the money they needed to rebuild their homes, and African-American households on average had an almost 35 percent higher shortfall than white households.

More than one in three residential addresses — more than 70,000 total — remain unoccupied, according to a report by the Greater New Orleans Community Data Center. While workers with Brad Pitt’s Make It Right project worked extra hours to finish the first of scores of planned houses in the devastated Lower Ninth Ward, the neighborhood overall ranks far behind other neighborhoods in recovery, with only 11 percent of its pre-Katrina number of households. The same report notes that since the devastation of the city, rents have risen by 46 percent citywide (much more in some neighborhoods), while many city services remain very limited — for example, only 21 percent of public transit buses are running. 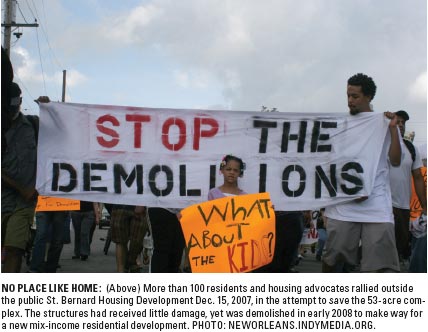 The aftermath of Katrina prompted a nationwide focus on race and class divisions in New Orleans. A poll by the Kaiser Family Foundation found that 70 percent of residents feel we live in a city divided by class and race. The Kaiser survey also found unity among New Orleanians: We are united in feeling abandoned by the rest of the United States. Eight out of 10 said the federal government has not provided sufficient support. Nearly two-thirds think that the U.S. public has largely forgotten about the city.

A large percentage of residents surveyed indicated that their own situation has deteriorated since before Katrina. Fifty-three percent of low-income residents have been diagnosed with serious mental illnesses such as depression, a threefold increase since 2006.

There is a continuing debate about how many people live in New Orleans, and definitive figures will not be available until the next complete census. But even optimistic estimates show that 150,000 to 200,000 former residents (out of a previous population of nearly 500,000) have been unable to return. The majority of those who have been kept away are African-American.

Much of the change in the city is being led by a new strata of the city’s population — planners, architects, developers and other reformers. Many self-identify as YURPs — young, urban rebuilding professionals — in their work with countless nonprofits, foundations and businesses. Some have spoken of New Orleans as a blank slate on which they can project their ideas of reform, whether it be in healthcare, architecture, urban planning or education. What this worldview leaves out, according to some advocates, is the people who lived here before, those most affected by these changes, who have the least say in how these plans are carried out.

“It wasn’t a blank slate, it was a cemetery,” says New Orleans educator and poet Kalamu Ya Salaam. “People were killed, and they’re building on top of their bones.”

The vast majority of New Orleans’ new professionals have come here with the best intentions, with a love for this city and a desire to help with the recovery. However, many activists criticize what they see as token attempts at community involvement and a paternalistic attitude among many of the new decision makers.

For example, our education system was in crisis pre-Katrina and certainly needed revolutionary change. Change is what we have gotten — the current system in many ways bears no resemblance to the system of three years ago — but this revolution has been overwhelmingly led from outside, with little input from the parents, students and staff of the New Orleans public school system.

Shortly after the post-Katrina evacuation of the city, the entire staff of the public school system was fired. Not long after that, school board officials chose to end recognition of the teachers’ union — the largest union in the city and arguably the biggest base of Black middle class political power in the city. Since then, the school landscape has changed remarkably, from staff to decision-making structure to facilities.

According to Tulane University professor Lance Hill, “New Orleans has experienced a profound change in who governs schools and a dramatic reduction of parent and local taxpayer control of schools.”

The school system used to consist of 128 schools, 124 of them controlled by the New Orleans School Board. Now according to Hill, of the 88 that have opened for the fall semester, only five are governed by the elected public school board. Fifty schools have received a charter to be privately managed by self-perpetuating boards. The other 33 schools are now run by the Louisiana Department of Education through the Recovery School District. 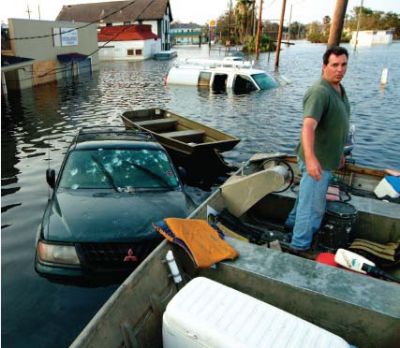 FACING A GRIM FUTURE: (Left) A man stands in a boat near his destroyed car on the flooded streets of New Orleans Sept. 5, 2005, evaluating the destruction left in the wake of Hurricane Katrina.
PHOTO: ANDREWSTERN.NET.

For school reformers, who came to New Orleans to test their educational vision, this represents a dream come true. Reformers are the subject of glowing profiles in the local and national press; federal, state and city officials are on their side; and they have a massive influx of cheap (and young, idealistic) labor. Teach for America supplied 112 teachers last year and has committed 250 this year and projected 500 next year. Tens of millions of dollars in funding is coming through sources such as the Gates and Walton foundations.

There is no doubt that some students receive an excellent education in the new school districts. However, critics are concerned that the students who are being left behind are the ones who need the most help — those without someone to advocate for them, to research their needs and to help them apply to the best schools.

According to New Orleanian Kalamu Ya Salaam, director of Students at the Center, a program for public school students that functions within the state Recovery School District, the new systems represent “an experimentation with privatization and everything that implies.”

This patronizing attitude of school reformers and government entities — dictating the terms of New Orleans’ recovery to the people most affected — is also reflected in the way New Orleans’ poorest residents were evacuated. The approximately 18,000 residents who had no means to leave the city had no choice o where they were taken during the forced evacuation. In fact, they were not even told where they were going, even after they were already on the bus. There was also no information available as to when, or if, they would be allowed back and whether they would be given transportation back to the city.

Fundamentally, policy makers do not trust New Orleanians to make their own decisions about the city. But it’s been the community, not foundations or government or so-called experts, that has led this city’s recovery at the grassroots. Bayou Road — a street of Blackowned, community-oriented, businesses in New Orleans’ Seventh Ward — has rebuilt its post-Katrina neighborhood to include more businesses than before the storm. It hasn’t been government help that has enabled these businesses to come back, but the effort of community members coming together. It was also grassroots action that brought back the membership of many cultural organizations, like the network of Social Aid and Pleasure Clubs, the century-old Black community institutions that play a vital role in New Orleans neighborhood life.

On Aug. 29, the Right to the City alliance (RTTC), a coalition that focuses on urban issues such as health care, criminal justice and education, co-sponsored Katrina commemoration marches and actions in New Orleans and seven other cities. RTTC representatives explained that they see the continuing crisis on the Gulf as central to their work, referring to New Orleans as “the front lines in the struggle against displacement and gentrification in the U.S.”

RTTC exemplifies organizations that have supported the struggles of the people of New Orleans by taking guidance from voices on the ground. In this time of competing visions of how to reshape this city, with the future still in doubt, that willingness to listen to the people whose lives are being affected — and to take that struggle and those lessons home to their own communities — may be the radical change New Orleans needs most.

Jordan Flaherty is a journalist based in New Orleans and an editor of Left Turn magazine.

For more information on the rebuilding of New Orleans, check out Isabelle Jagninski’s article in this issue of The Indypendent.