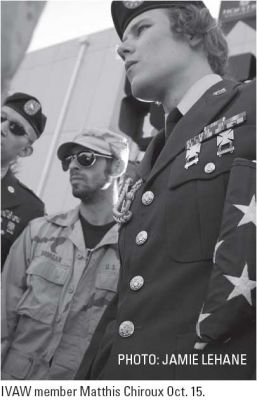 “Our goal is to make Iraq and veterans the forefront of the debate,” said former U.S. Army Sergeant Kristofer Goldsmith, an IVAW member who served in Iraq in 2005.

As nearly 400 antiwar demonstrators tried to get close to the Hofstra campus two hours before the debate was to begin, riot police and officers mounted on horseback charged people standing on the sidewalk, too. “The horses were pushing, like really pushing, against [members of IVAW] and physically touching their bodies,” said Erika Ward, an New York University student and intern at TV/radio news program Democracy Now! “To see people laying on the ground…was crazy.  For me, it was really emotional, [and] I saw people crying,” she continued.

One victim was former U.S. Army sergeant Nick Morgan, who served in Iraq from 2004-2005. Witnesses say that a horse stepped on his face, causing him to suffer a fractured cheekbone. A gash was visible on the side of his face, with blood dripping onto the pavement.

Morgan was arrested and only taken to a hospital after fellow IVAW members insisted to the police that he was exhibiting signs of a concussion. At the hospital, according to IVAW member Matthis Chiroux, Morgan was only given Motrin and was then brought to the police station. Chiroux said that members of the Nassau County police department sexually harassed the women who were arrested, including IVAW member Marlisa Grogan. Chiroux also noted that the prison officers mocked the veterans and threatened him with prison rape.

The protest had began slowly hours earlier in the afternoon with about 70 antiwar activists rallying at a parking lot nearby the Hempstead train station.

“We have a blind media [and] deaf candidates, but [IVAW] has a voice that will be heard,” said former U.S. Marine Corps Corporal and IVAW member James Gilligan.

As more activists from the New York City area poured in, the march to the Hofstra campus began with defiant chants of, “Stop the torture, stop the war, this is what we’re fighting for,” and “They’re our brothers, they’re our sisters, we support war resisters!” filling the streets of Hempstead.

“The troops have “been promised so much … it’s important for IVAW to have a voice,” said Chelsea Florio, a member of the Fordham Anti-War Coalition.

IVAW members, backed by a crowd of antiwar protesters, were allowed to pass through one group of police officers before they were met with lines of Nassau County riot police and officers on horses who would not allow the veterans to enter the Hofstra campus. IVAW members Chiroux and Goldsmith, who organized the protest, attempted to get into the university first and were promptly arrested. At least three other veterans and four civilians followed and were arrested as well.

The arrests seemed to energize the crowd, and as they chanted, “Let them in,” it looked as if things could easily get out of hand. The police on horses pushed back against the crowd, which was fronted by a group of about 15 Iraq veterans, until the demonstrators had been moved onto a nearby sidewalk.

After a tense standoff for five minutes, approximately four people were knocked over by riot police and horses. It was during this fracas that more arrests were made and Morgan was injured.

About two weeks ago, Chiroux, who this past May publicly declared his intent to refuse to deploy to Iraq, sent a letter to CBS presidential debate moderator Bob Scheiffer spelling out IVAW’s demands. Chiroux’s letter demanded that two members of IVAW, himself and Goldsmith, be allowed entry into the debate to ask Senators Barack Obama and John McCain one question each. CBS or Schieffer did not respond to the letter.

“What yourself and the candidates must decide now, Mr. Schieffer, is what the legacy of this debate will be.  Will this be remembered as an event where both sides of the [aisle] and the media came together to hear from our nation’s heroes…or will the words and promises of both candidates be forever shrouded in the image of a host of uniformed veterans and their supporters going to jail because these campaigns cared too little to hear from them?” Chiroux’s letter read.

Earlier in the afternoon, Chiroux announced to the crowd what he had planned on asking Obama: “Are you prepared to back up your own words and the U.S. Constitution by supporting service members refusing to participate in what you describe as an illegal occupation?”

Goldsmith did the same, but his question was addressed to McCain: “What promises are you willing to make … to prove that you will ensure the V.A. is fully funded, staffed and capable of preventing troops from suffering as they are now?”