Check back here soon for a longer version of this article! 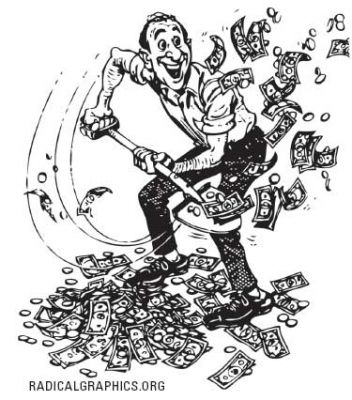 Don’t believe the financial press when it says the Department of the Treasury “quietly nationalized much of the U.S. banking system” on Oct. 14. And don’t believe anyone administered last rites to capitalism or neoliberalism.

Treasury Secretary Henry Paulson’s plan is not only highway robbery, it shows that capital is profiting off the disaster it helped create and government is still relying on the bankrupt ideology of self-regulating markets to solve the problem.

John Kanas, former CEO of North Fork Bancorp, summed up the plan as “a pretty good deal for the recipients and probably a pretty tough deal for taxpayers.” He added, “It seems quite explicit that there’s no strings attached to this money …. It seems like a gift.”

The Paulson plan offers little public ownership other than absorbing the banks’ losses. It may seem to be a nationalization because the Treasury is injecting capital in banks for equity stakes, instead of the original plan of buying only toxic mortgage backed securities. But don’t cry for the banks. The New York Times noted the first phase of the plan will “provide $125 billion to nine banks on terms that were more favorable than they would have received in the marketplace.”

When the chiefs of the nine banks met with the Treasury on Oct. 13 they were told they “would pay a relatively modest 5 percent in annual dividend payments” to the U.S. government. In contrast, on Sept. 23 Warren Buffet announced he would invest $5 billion investment in Goldman Sachs, for which he received a 10 percent dividend.

The Treasury will buy “preferred shares” that have no voting rights, so it will have no real say in the institutions. This is opposed to the British plan to partially nationalize their banks, which involves buying preferred and common shares. The Treasury’s decision not to demand common shares effectively protects shareholders by propping up the stock prices of financial firms, rather than making them take a hit, as happened to the shareholders of British banks.

Paulson was unabashed about this lopsided deal when he introduced the plan on Oct. 14, saying, “We’re not looking to come in and take meaningful ownership percentages.”

Thus, the bailout appears designed to protect large investors like Mitsubishi and Buffet. Or as the Wall Street Journal put it, “To make sure private investors aren’t scared away,” the Treasury structured “its investment on terms favorable to the banks.”

While some sort of government intervention was necessary to revive the credit sector, the Paulson plan is of dubious value. From a lack of controls over how banks will use the bailout funds to ineffective limits on executive compensation to a scaling back of investigations of Wall Street fraud, the operating principle of the bailout is to let the markets self-regulate.

Moreover, the Paulson plan fits into the neoliberal practice of private profit at public expense. Financial firms will profit both from the bailout itself and by getting paid fees to manage the taxpayer funds used to bail out banks.

In another favor to U.S. banks, they can keep paying dividends while the British plan mandates that “banks can’t pay shareholder dividends until they repay the preferred shares they are issuing to the government,” according to the Journal. So U.S. banks could use taxpayer money to pay shareholders instead of shoring up credit markets.

This lack of control over the bailout money may be the plan’s fatal flaw: The government “has offered no written requirements about how or when the banks must use the money.”

Former North Fork Bancorp CEO Kanas, said, “Banks are likely to use the government capital to retire outstanding debt that pays a higher yield than the 5 percent on the government’s preferred shares.” This will boost their profits while doing little for the overall economy. The banks could also use the money “to acquire weaker competitors … avoid painful cost-cutting” or just “sit on the capital.”

In one of the greatest absurdities, the banks that spawned much of this economic disaster will profit from managing the $700 billion bailout fund. Take the Bank of New York Mellon. It has been named the “master custodian firm” to manage the inflow and outflow of the fund, which is described as a “potentially lucrative assignment.” The Bank of New York Mellon is one of the first recipients of the capital infusion, having received $3 billion. Presumably, then, it will make money by managing the money that’s being used to bail it out.

Other banks are lining up at the trough. With “$700 billion to disburse,” reported the New York Times, “the plan could still generate tens of billions of dollars in fees if the firms negotiate anywhere close to their standard fees.”

And never mind talk about cutting the cords off golden parachutes and pinching executive pay. Neel Kashkari, a former Goldman Sachs executive handpicked by Paulson to manage the $700 billion fund from the Treasury side, told the Securities Industry and Financial Markets Association the night before the U.S. House of Representatives rejected the first bailout bill that the restrictions would be “a pretty modest hindrance.”

This was no idle comment. Of the four provisions to crimp lavish payouts for senior executives, the only one with teeth is a ban on new golden parachutes (already existing parachutes are unaffected); the other three provisions are meaningless.

And it appears criminal behavior is being rewarded. Not one Wall Street executive has been forced to resign. The FBI has opened criminal investigations into Fannie Mae, Freddie Mac, AIG and Lehman Brothers, but these are all failed firms. There is no indication any firm still standing is being probed. Even more troubling, the Times reported that FBI officials worry that the bailout “may itself become a problem because it contains inadequate controls to deter fraud.”

The lack of controls and constraints on executive compensation are part of a broader counterattack to undermine greater domestic regulation and global oversight of the hidden markets behind the financial implosion. Neoliberalism will not go gently into the night gently. Its proponents still run the show, and perhaps they have abandoned their free-market rhetoric, but it’s only to salvage the monied interests.

Congressional Democrats are considering modest Keynesian-style public works projects, bolstered with increased unemployment benefits, tax cuts and aid to states. As for their standard-bearer, Barack Obama, his latest speech calling for quick action was full of half-measures like bankruptcy court adjustments for home owners, which is far less effective in supporting house prices than a new Home Owner’s Loan Corporation; corporate welfare, such as loan guarantees for automakers; and conservative ideas like “eliminating all capital gains taxes on investments in small businesses and start-up companies.”

Change is not going to happen because voters install a Democratic majority in Washington. It is nearly as beholden to corporate overlords and their free-market apostles as the Republicans.