“We were absolutely bypassed in this process,” says one community leader.

Seven-and-a-half acres of East Harlem have become the latest battleground between local residents and city officials over gentrification of Harlem’s main street.

The City Council cleared the way Oct. 7 for the 1.7-million-square-foot East Harlem Media, Entertainment and Cultural Center, which will be located between East 125th and East 127th Streets, from Second to Third Avenues. The $700 million complex will include office and retail space, open-air space, a hotel, a cultural center and 800 apartment units.

But some Harlemites are charging that city officials who okayed the mega-project are ignoring the needs and wants of the neighborhood and participating in a murky community engagement process.

“The EDC [New York City Economic Development Corporation] doesn’t care about the culture of the area,” says Evan Blum, who owns the Schmuck Brothers of Pennsylvania antique store at 205 E. 125th Street. “They don’t know how to cultivate it to make it benefit the community.”

EDC officials at a town hall meeting one week before the Oct. 7 vote said they were in contact with all business owners who would be affected by the development. But Blum says he has not been approached by the EDC and believes the city intends to invoke eminent domain.

“The EDC has been deceptive and dishonest,” he says. “I’m disgusted by these characters. You work hard, you pay your taxes, and then they use that money to throw you out.”

Eighteen locally-owned businesses and seven property owners would be displaced by the project. Damon Bae, owner of the Fancy Cleaners dry cleaning business at 2319 Third Avenue, says the EDC approached him with a conditional offer for his property.

“It was largely insufficient,” he says, declining to comment on the precise amount of the offer.

Due to community protests, Councilwoman Melissa Mark-Viverito — whose district includes East Harlem — formed the East 125th Street Task Force two years ago to foster a dialogue between the City and the community about the proposed project.

But Miriam Falcon-Lopez of the Community Association of the East Harlem Triangle says her organization — which has overseen all East Harlem developments for the last 45 years through an agreement with the City of New York — was forced out of the task force negotiations for not agreeing with the process and plans for the development project.

“Community Board 11 and the EDC were force-feeding us their agenda by providing us with documents and designs that were already in place,” she says. “We were absolutely bypassed in this process.” 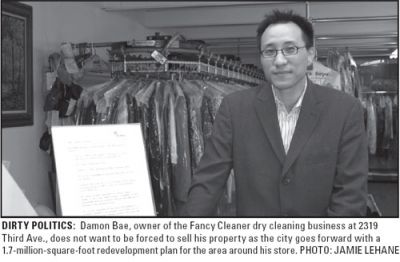 Falcon-Lopez said she was also concerned by the task force’s unwillingness to create a community benefits agreement (CBA). A CBA would specify the benefits the developer will provide to the community in exchange for its support of the project.

Instead, the task force included various points of agreement regarding community benefits in its draft contract with the developer. But there was one problem: the names of the prospective developers were kept secret, provoking residents to wonder how the community’s needs could be secured if there was no developer to negotiate with directly.

A development team was eventually decided upon around the time of the Oct. 7 vote, but not revealed to the community until after the City Council votes were cast.

City officials defended the process, citing the East Harlem 125th Street Task Force as evidence of a rare dialogue between the City and its residents, even calling it a precedent for future projects.

However, there is a chance the project might not go forward, at least not anytime soon; the City has selected a developer that is at risk of becoming another casualty of the global credit crisis.

General Growth Properties — the largest of the seven development partners chosen to implement the East 125th Street project — has lost 90 percent of its share price since the beginning of the year, and there are worries that aspects of the project such as affordable housing might be cut from the project if credit and capital are scarce. The company has recently postponed $1.1 billion worth of similar projects, according to Green Street Advisors, a research company in California.

Mark-Viverito voted for the project in the City Council Oct. 7 after holding two town hall meetings in East Harlem on Sept. 25 and Oct. 2 in which outraged members of the community expressed their disapproval of the project and accused her of forgetting who voted her into office.

“The community’s voice has been heard in this project,” Mark-Viverito said afterwards in a phone interview with the Indypendent.