Please send event announcements to indyevents@gmail.com.
The next open editorial meetings for The Indypendent are Tuesday, Oct. 7, and Oct. 28, at 7pm at 4 W 43rd St, Room 311. All are welcome. 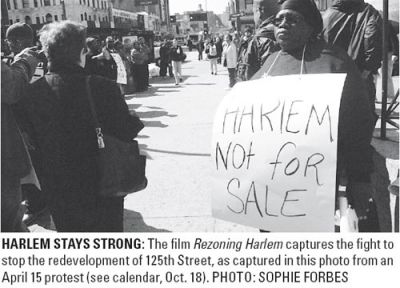 TUE OCT 7
6pm-8pm • FREE
DISCUSSION: HOW DOES IT FEEL
TO BE A PROBLEM? BEING YOUNG
AND ARAB IN AMERICA. Moustafa
Bayoumi’s new book examines what it’s
like being an Arab-American in a post-
9/11 global climate. He explores these
questions through the firsthand accounts
of seven young Arab-Amerians living in
Brooklyn.
CUNY Graduate Center, 365 Fifth Ave
212-817-1880 • tinyurl.com/4vyp4g

SAT OCT 11
4pm • FREE
FILM: FINALLY GOT THE NEWS.
Experience a powerful documentary
about the activities of the League of
Revolutionary Black Workers inside and
outside Detroit’s auto factories. Beginning
with slavery through the growth and
organization of the working class, the film
focuses on th crucial role played by black
workers in the American economy.
Exit Art, 475 Tenth Ave (at 36th St)
212-966-7745 • info@exitart.org

SUN OCT 12
6pm-10pm • FREE
DISCUSSION: THE THEOLOGY OF IMMIGRATION:
GOD, IMMIGRANTS AND
ACTIVISM. Join Radical Living, Justice
for Our Neighbors, the New Sanctuary
Movement and John Wesley United
Methodist Church for a gathering of
clergy, layperson, immigrant and nativeborn
people sharing with one another
their beliefs and discovering what the
Bible really has to say about immigration.
John Wesley United Methodist Church
260 Quincy St, Bklyn • 212-444-2701
radicallivingnyc.com

WED OCT 15
7:30pm • Sliding scale $6/$10/$15
CALENDAR LAUNCH: THE PATH OF
MOST RESISTANCE: A U.S. RADICAL
HISTORY TOUR. Celebrate the publication
of the new edition of the War Resisters
League’s best-selling peace calendar,
edited by author Judith Mahoney Pasternak,
who is a film and theater critic for The
Indypendent.
The Brecht Forum, 451 West St
212-242-4201 • brechtforum.org

FRI OCT 17
4pm-6pm • FREE
EVENT: BOY/GIRL OR NONE/BOTH OF
THE ABOVE: TRANSGENDERED IN THE
21st CENTURY. Celebrate and discuss
the joys, freedoms and predicaments
that come along with self-identifying and
being either, all or neither when it comes
to gender. Are masculinity, femininity
and the gender binary now obsolete?
Reception to follow discussion.
The Library, 2nd Fl
Casa Italiana Zerilli-Marimo
24 W 12th St (btwn Fifth and Sixth Aves)
212-998-8730 • dnl215@nyu.edu

FRI OCT 17
7:30pm • Sliding scale: $6/$10/$5
BOOK DISCUSSION: 1960s FEMINISTS
REFLECT ON LIFE & POLITICS. Lynne
Segal’s latest book, Making Trouble: Life
and Politics, looks at how a renewed feminist
movement emerged in the 1960s and
1970s along with experiments with communal
living lifestyles, which had people
share everything from their lovers to their
children. Segal will lead a conversation
with authors Rosalyn Baxandall, Harriet
Fraad, Ann Snitow and Meredith Tax.
The Brecht Forum, 451 West St
212-242-4201 • brechtforum.org

SAT OCT 19
10:15am-1pm • $15
WALKING TOUR. FIND WILD FOOD IN
PROSPECT PARK. Join locavore and
botanist Leda Meredith for a guided tour of
Brooklyn’s urban forest. Autumn’s cooler
weather means that there will be looking for
wild greens, nuts, root vegetables, the last
of the summer fruits. At the end of the walk,
sit in the park and eat wild edible treats!
Meet at the Grand Army Plaza entrance
(near the Gazebo), Prospect Park, Bklyn.
greenedgenyc.org • RSVP Joanna and
bring cash: joanna@greenedgenyc.org