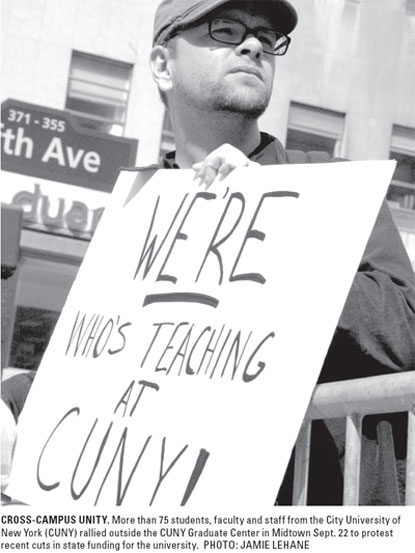 Battered by budget cuts and burdensome tuition costs while facing an indifferent administration, students at the City University of New York (CUNY) will hold a three-day gathering to chart a course for reviving campus activism.

The CUNY Social Forum will be held at the City College campus in Harlem Oct. 17 to 19. The goal is to bring together students, adjuncts and faculty from across CUNY’s 23 campuses to share their experiences and strategize around a host of important issues including tuition hikes, the university’s increasing reliance on low-wage adjuncts, restoring open admissions and defending ethnic and gender studies programs. Organizers also envision CUNY as a place where student, faculty and the community have meaningful decision-making power.

“By seeing CUNY as an integral part of the city, and not just a place to do time before we can get a real job, I think we start to see the bigger picture,” forum organizer Terri Bennett wrote in an email to The Indypendent. “Just like our neighborhoods are becoming unaffordable, as people of color, the working class, and poor people are being displaced by real estate developers … CUNY is becoming less and less accessible to those same people. Just like New York needs a movement for affordable housing, we need a movement for an accessible CUNY.”

The CUNY Social Forum is modeled on global, national and regional social forums that have been held around the world during the past seven years. The social forum model allows participants from various social movements to come together and share their experiences and organically build alliances, rather than unite around a single charismatic leader or ideology.

Founded in 1848 as a free academy for the children of immigrant and working class New Yorkers, CUNY has a rich history of radical student activism dating back to the socialist movements of the early 20th century. In 1969, a two-week student-led takeover of the City College campus forced CUNY’s administration to adopt an open admissions policy that greatly expanded opportunities for Black and Latino students. In 1989 and 1995, thousands of CUNY students took to the streets to protest proposed tuition increases.

Despite these efforts, tuition and fees at CUNY rose 94 percent in inflation-adjusted dollars from 1989 to 2006, while the state’s contribution fell by 35 percent and the city’s by 24 percent, according to the New York City Independent Budget Office. The Budget Office also reported that tuition payments as a percentage of CUNY’s $1.7 billion annual budget jumped from 19.9 percent in 1990 to 42 percent in 2006.

Today, CUNY students face an uncertain future as the city and the state confront budget shortfalls due to the economic downturn. In August, the legislature cut state funding for CUNY by $51 million (or, 7 percent) at the behest of Gov. David Paterson, even as the governor forecast more budget cuts in coming years.

“Right now, the problems are not just in schools, but society as well,” said Mark Torres, one of several former CUNY students who participated in the 1989 protests who is helping organize the Social Forum. “Now is a time for change, and I have faith in this school.”

CUNY is the largest urban university system in the country. It is comprised of 23 institutions including 11 four-year colleges and six community colleges. More than 400,000 undergraduates, graduates, adult, continuing and professional education students are enrolled in the university system. Because it is primarily a commuter school and half the student body works while taking classes, it’s difficult for the students to exert pressure on the university’s Board of Trustees, who are appointed by the governor and the mayor.

“We are pretty alienated here,” said Olivia Katz, a graduate student who is one of the founding members of the Social Forum. “We never knew what was going on at different campuses, or where our money was going.”

Katz and friends began meeting to discuss what was going on between campuses and what they would like to know. Before long, the group became larger and they took on the Social Forum name.
“Once it started, everyone had an issue,” said Katz. “People had problems with tuition, privatization, the increasing number of adjunct faculty who have to teach to pay tuition — tons of things.” 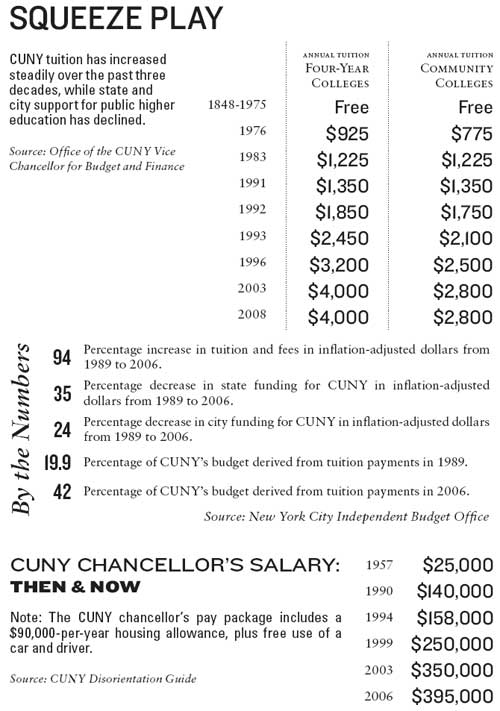