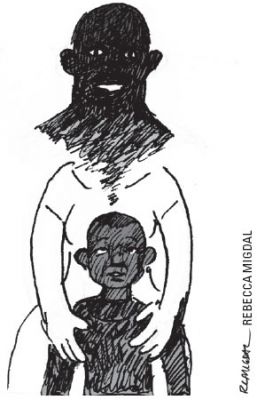 Dreams from My Father
By Barack Obama
Three Rivers Press, 1995

At a political roast, the Al Smith dinner in New York, Barack Obama joked about being “The One,” a knowing wink about the religious fervor of his fans. “Contrary to popular belief,” he said, “I was not born in a manger.”

With Wall Street in ruins, however, Obama is expected to save us. He plays the role with enough irony to deny it, but just enough pleasure so we know he feels it. Why does he enjoy promising redemption?

A clue is found in his 1995 memoir Dreams from My Father. Originally a medium-seller, it has now sold hundreds of thousands of copies during the presidential campaign as readers sift its pages like a Rosetta Stone for Obama.

His memoir shows a need to redeem. Redemption is the act of seeing through the degraded state of a loved one to salvage the hidden value. Which is why his memoir should be called Dreams from My Mother — because Obama dove into African-American culture not to create a black identity, but to redeem the one she gave him.

It was through her eyes that Obama saw black as beautiful, and it was through the white perspective in TV and magazines that he saw it degraded. She, being white, could not protect him from racism she could not see, and they grew apart. He searched black culture for a psychic refuge but could not find it until he faced the man who gave him his color, the man who abandoned him, his father.

Barack Obama Sr. had a family in Kenya when he courted Stanley Ann, a young white woman from Kansas. In a whirlwind of hunger and fascination they married and soon Obama Jr. was born. Two years later the whirlwind blew itself out. When Obama Jr. asked for his father, his mother created a mythology for her son to love in place of a man.

She woke early each day to teach him about the civil rights movement, played Mahalia Jackson records and told him that “to be black was to be the beneficiary of a great inheritance, a special destiny, glorious burdens that only we were strong enough to bear. Burdens we were to carry with style.”

However, there were threats she could not see. As a child he saw in Life magazine a black man who chemically peeled his skin to be white, his face burned to a ghostly hue. Obama was terrified that a man, brown like him, would willingly destroy himself. He writes, “I went into the bathroom and stood in front of the mirror … and wondered if there was something wrong with me.”

So began Obama’s double consciousness. This term was coined by W.E.B. Du Bois in The Souls of Black Folk to describe “this sense of always looking at one’s self through the eyes of others, of measuring one’s soul by the tape of a world that looks on in amused contempt and pity.”

Obama sought safety. His mother could not shield him, and his father was absent, so he searched for it in “blackness” as a high school basketball player, then as a college activist and finally as a community organizer. He listened to old men gossip in the barbershop, women wobbling under the burden of old age and older worries, kids cursing on the corner. Obama internalized blackness because it shone like a UV light, exposing invisible racism.

But his blackness was not one he learned from black folk but the one his mother taught him with images of the civil rights movement. He slogged through the nihilism of a broken people and marched to the last door of power as if she’d be on the other side. To do so he had to redeem the man who gave him color, the man she first loved, the man who failed him.

Obama traveled to Kenya to learn about a father who was too proud to bow before the powerful and too proud to speak of the pain when stripped of his job. His father drank himself numb and crashed his car one night, killing himself. Standing at his father’s grave Obama wept, “Oh father, there was no shame in your confusion … There was only shame in the silence fear had produced. It was the silence that betrayed us.”

Having lived between the lies people tell, Obama knew they separate us so far from reality that we become terrified of it and will commit crimes to keep it at bay. His father had lost his life to such lies. By writing his father’s story, a story Obama Sr. was unable to tell, Obama the son redeemed him. It is this need to redeem, to pay off the debt of those silenced by shame, that drives him.