Every four years, activism in the United States is co-opted and channeled into the chaotic muck of presidential elections, only to fizzle out afterward. Thousands of people are sucked into the notion, that somehow this time, if the Democratic candidate is elected, there just might be real change. That’s right, change we can believe in — spoonfed to us by Barack Obama.

San Francisco activist hero Chris Carlsson’s refreshing book, Nowtopia: How Pirate Programmers, Outlaw Bicyclists, and Vacant-Lot Gardeners are Inventing the Future Today!, is an encouraging diversion from the election chatter. Mixing an insider’s look at do-it-yourself (DIY) culture with a post-Marxist analysis, Carlsson highlights individuals who are organizing around practical community projects, rather than political parties or organizations (which Carlsson describes as “the hollow simulations that we call representative democracy”).

Carlsson captures a decentralized movement defined by people’s shared exhaustion from wage slavery and a political system that refuses to conceive of a world built from the creativity and concerns of ordinary people. Carlsson takes the reader on a whirlwind tour of edgy community gardens, “outlaw” bicycle culture, local biofuel production, autonomous computer culture and the “classlessness” and innovation at the weeklong Burning Man festival. 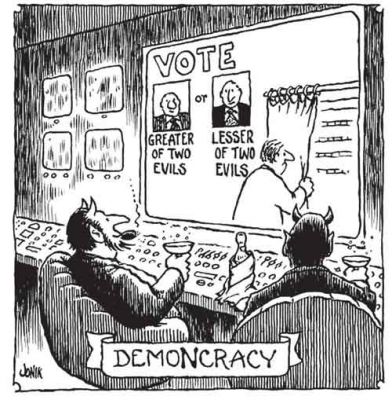 While dry and intellectually dense at times, Nowtopia (which takes many examples from New York City) is an inspirational read for the burned-out worker looking for the confidence to break free of the daily grind and follow her heart.

A more hands-on guide to building a new world is Scott Kellogg and Stacy Pettigrew’s Toolbox for Sustainable City Living, containing basic recipes for all of life’s necessities — from composting toilets to biofuel production to rainwater collection systems to cultivating bugs for chickens. Select black-and-white photographs and simple pen-and-ink illustrations by Juan Martinez help us visualize how simple “simple living” can be. The authors contend that a massive social transformation is needed to overcome the fact that our society “has overextended its natural limitations in every capacity.” Toolbox authors promote the political philosophy of dual-power anarchism — simultaneously dismantling entrenched power while building alternatives. These alternatives can only emerge locally from the principles of sustainability, egalitarianism and cooperation that “encourage further independence from the destructive and dangerously unstable dominant systems.”

The book examines simple systems — such as the experimentation of the Rhizome Collective in Austin, Texas, which the authors helped co-found — to inspire people to manage their own food production, waste, energy needs, water resources and bioremediation, without becoming “green consumers” in the process. A valuable resources section compiles how-to books and online information.

Change will not come by way of ballot or through Democratic leadership, Nowtopia and Toolbox both argue, but by a movement of grassroots lifestyle adjustments and on community-based projects that take on food autonomy, environmental protection, health care, education, media and sustainable infrastructure.