Everyone in Elite Squad, which won the Golden Bear at this year’s Berlin Film Festival, works the system of pervasive drug trafficking that extends its stranglehold out of Rio de Janeiro’s favelas to implicate even the members of BOPE (Special Police Operation Battalion), the roughest, toughest and least corruptible ranks of the city’s police corps.

Narrated by Squad Captain Nascimento in the knowing voice of co-screenwriter Rodrigo Pimentel, himself a military police officer and captain for 19 years, Elite Squad shoots for a customized exposé feel, which makes its implicit endorsement of impunity and absolute rule as a BOPE prerogative especially disingenuous. Flashy editing and propulsive music evoke a high-octane thrill ride, laden with the requisite doses of sadistic violence and expletive-heavy dialogue that have come to pass for a standard of realism, while character development never reaches beyond advancing the plot. 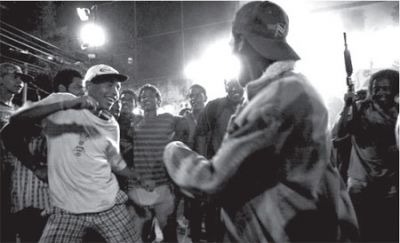 The storyline itself — with the Pope’s 1997 visit to Rio as Nascimento’s final protective mission, his dual prospects of appointing a successor and becoming a father, the split between the brainy dogooder Matias and the impulsive enforcer Neto as best friends and main candidates to succeed him — feigns mythical grandeur, but comes across forced and schematic. Filmmaker José Padilha tries to make Elite Squad into a Brazilian Miami Vice (2005), yet neither its shallow scope nor its artificial intensity hold a candle to Michael Mann’s masterwork — perhaps the single truly globalist film to date.

A few months ago David Denby proposed in The New Yorker that French director Olivier Assayas has with his last couple of films — Demonlover (2002) and Boarding Gate (2008) — “distilled a new genre — the vicious globalist thriller.” Assayas’ groundless, boundless films are decidedly unpleasant and numbing in their lack of moral consciousness, let alone conscience. They present a lifelessly buzzing universe, with every uninteresting individual’s guilt reduced to a vacuum. These flicks are merely blasé, though, compared to the genuine viciousness of the tradition of ‘embracing global issue’ films spearheaded by Steven Soderbergh’s Traffic (2000) and including Crash (Paul Haggis, 2004), Babel (Alejandro González Iñárritu, 2006), City of God (Fernando Meirelles, 2002) and City of Men (Paulo Morelli, 2007) — the latter two obvious influences on Elite Squad, which was co-written by City of God’s Oscar-winning screenwriter Braulio Mantovani.

By now a critically and commercially bankable franchise, this type of movie latches on to a ubiquitous social plague — drugs, racism, terrorism — and contrives to exhibit how it cuts across social boundaries to involve us all. The moral implication of such a connection is to exculpate any party from personal responsibility within a global system that operates beyond our control. “We are all victims,” the underlying mantra of false solidarity echoes, and in that knowledge we can complacently refrain from engaging in acts that resist the hegemony of corporate capitalism. 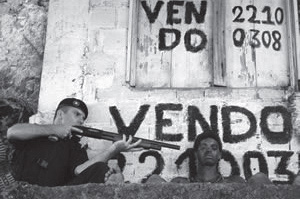 The key supporting principle here is the erasure of micro-cultural difference in favor of monolithic macro- cultural commonality: whichever ethnicity-, religion-, family-, state- or class-based ties bind us and make us belong to a specific sense of place, deep down we citizens of the world are all the same, decent, well-meaning people. Ironically, this discourse surfaces because, objectively speaking, our only universally shared status is in our function as largest common denominators of the capitalist enterprise sustaining the problems the genre addresses. To resist this ideological closed circuit means to firmly localize the plight of displacement caused by the globalizing condition, to identify it first and foremost as a crisis of living space.

Exactly therein lies the accomplishment of Rodrigo Plá’s La Zona, one of the highlights of this year’s New Directors/New Films Festival, which details how a gated community in Mexico City is penetrated by a few intrepid, opportunistic young looters from the poor surrounding neighborhoods and becomes a mantrap for one of the intruders. A gratingly honest parable of vigilante security dovetailing with mob rule, Plas’ film imbues dystopian paranoia motifs from other movies with an eerily commonplace feel that boils down to articulating the entrenched capitalist divide between haves and have-nots in terms of radical spatial demarcation.

Elite Squad, by contrast, has the drug economy conjoin a privileged bourgeois student body, workingclass police officers and disenfranchised favela gang members without ever relating the overlapping territorial claims of these characters to the cityscape of Rio. (In much the same way, Crash never bothered to integrate the dots of its spasmodic plot trajectory into the urban sprawl of Los Angeles.) Beyond the backdrop of any individual scene, they harbor no attachment to their habitat, form no part of a spatially oriented community and lack any geopolitical identity. The brutally excessive assertion of male bonding on the part of the untouchable BOPE outfit seems therefore less a fascist outgrowth of the vicissitudes of capitalism than a pathological tribalist tendency that, like the film itself, has all the integrity of an empty ritual.