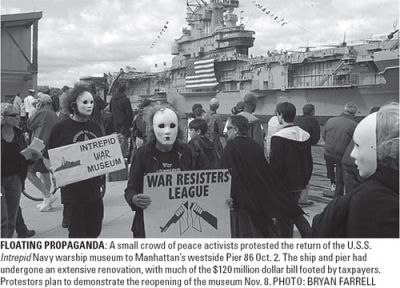 While hundreds gathered to welcome the return of the U.S.S. Intrepid to its west Manhattan pier Oct. 2, not everyone present was there to celebrate. More than a dozen peace activists carried banners and handed out fliers along the waterfront to protest what one demonstrator called “an obscene monument to war.”

The Intrepid, a U.S. Navy aircraft carrier, set sail in 1943 during World War II, and was deployed during the Korean and Vietnam wars. In the 1960s, it was used as a support vessel in two NASA space missions. Decommissioned in 1974 after years of service, the ship has served as a military and space museum at Pier 86 since 1982.

Nearly two years ago, the warship was hauled to Bayonne, N.J., and then to Staten Island for extensive repairs and renovation. Despite being a privately run enterprise, virtually every cent of the estimated $60 million to fund the overhaul of both the aircraft carrier and the dilapidated pier was paid for by federal, state and local governments. Before it was all over, the cost of the project ballooned to $120 million.

“I’m appalled that my taxes are being used for this. It’s outrageous and offensive,” said Jim Moschella, a member of Brooklyn for Peace who was at the demonstration.

Paying for these repairs, however, does not mark the first or the only time taxpayer dollars have been allocated for the museum. Back in 1982, the Intrepid Foundation received a $4.5 million grant from the U.S. Department of Housing and Urban Development to supplement the more than $120 million in private funds to establish the museum.

“The public money used to renovate and rehab what is essentially a war propaganda museum could be better spent on many things, particularly given the last week in this country,” argued Matt Daloisio, a member of the New York Catholic Worker, alluding to the risk of foreclosure faced by millions of homeowners due to the recent financial crisis.

Drawing more than 750,000 visitors per year, including 50,000 schoolchildren, the Intrepid has become one of the city’s most popular tourist destinations. According to the museum’s website, its mission is “to honor our heroes, educate the public, and inspire our youth.” On display are 30 aircraft, the once nuclear armed U.S.S. Growler submarine and a variety of other military hardware used in America’s many wars.

“They talk about it as being educational,” said longtime member of the War Resisters League, Ed Hedemann, “but really it’s a glorification of war and a recruitment tool to get young people interested in the military.”

On his most recent visit to the Intrepid, Daloisio went on a ride that simulated a bombing run over a country specified as Iraq. He was later asked to leave, after politely inquiring about the civilian death toll from the bombs on the planes that were being described during a tour. “There is no mention whatsoever of the victims of war,” Daloisio said.

“It’s not simply a museum, it’s a warship that takes taxpayer money and uses it to put out propaganda to children that war is something that is not only acceptable, but entertaining and fun,” Daloisio said, who brought his 16-month old baby to the protest.

So what should be done with the Intrepid? One protestor who served in the Navy thought it should be used for scrap metal, while others thought it could serve a more useful function. “The best thing that could be done with the Intrepid,” Hedemann said, “would be to convert it into a peace museum showing the horrors of war rather than glorifying the battles that it has been in and people that have been killed.”

The next protest at the Intrepid will be held at 11am on Nov. 8, when the museum will officially reopen its doors to the public. The Intrepid Museum is located at Pier 86, Twelfth Avenue and West 46th Street.