Having lived my entire life in the Midwest and South, I have heard the phrase “flyover states” more times than I can count. The little attention that these vast regions receive is dedicated to ridiculing them as backward and ignorant. Progressive politics, it is thought, only occurs in the urban areas of the East and West Coasts; the rest of the country is a mess of rightwing politics with little hope for change.

Red State Rebels: Tales of Grassroots Resistance in the Heartland seeks to dismantle just such myths. By recounting dozens of instances of grassroots activism, editors Joshua Frank and Jeffrey St. Clair demonstrate that current “common knowledge” about the politics of the West, Midwest, Southwest and Southeast ignores present realities. In focusing on both historical and contemporary activism, Red State Rebels shows that these actions are not isolated incidents, but rather part of broader movements for justice.

In “How to Beat a Mining Company,” St. Clair illustrates how environmentalists in Oregon “banished North America’s largest gold mining company from the state of Oregon” by proposing statewide environmental safeguards. Ted Nace recounts how North Dakota farmers took on chemical manufacture Monsanto and won a statewide ban on genetically engineered wheat. “The Border Diaries” captures the oppression enacted daily at the U.S.-Mexico border, the dignity with which [im]migrants struggle against deportation and the important work of No More Deaths in assisting [im]migrants with basic health treatment at the border. 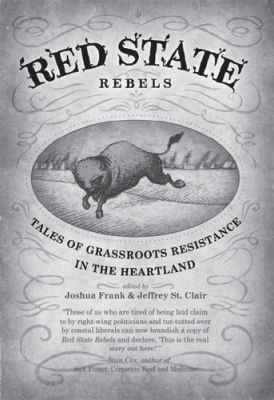 The compilation’s attention to Native American organizing is one of its major strengths. While the breadth of most of the book creates a lack of depth in any specific movement discussed, this section’s specific focus allows for greater depth than found elsewhere in Red State Rebels. Essays interweaving the history of the theft of Native lands with current Native American organizing illustrate the profound legacy of Native American resistance against colonialism and genocide. The chapter “Indian Country” demonstrates that Native activists are waging fierce battles, from Ward Churchill in the academy to Cecelia Fire Thunder’s reproductive justice organizing.

Red State Rebels is not without its flaws. While a few chapters touch on issues of gender justice and sexuality, in a book with more than 40 chapters, discussion of these issues is scant. By including more on organizing against heteropatriachy, the editors could have further broken down the myth that women, trans and queer folks in the heartland are without political agency. Moreover, there is no clear definition of what constituted a “rebel.” While most of the book seems to define “rebels” as people fighting against oppression and injustice, some chapters glorify individuals affiliated with the religious right and other sectors of the right wing for their anti-government politics.

Even with its shortcomings, Red State Rebels strikes a key blow against the all-too-common belief that the majority of the United States is a conservative wasteland. The writers remind us that many people in these “flyover states” are following in the tradition of the American Indian Movement in Minnesota, the Black Freedom Movement of the South and miners’ struggles in Colorado. For hundreds of years, grassroots resistance has been nourished and grown in these lands that have been deemed politically irrelevant. We must recognize this history if we hope to connect and build stronger movements for real social justice across the United States.