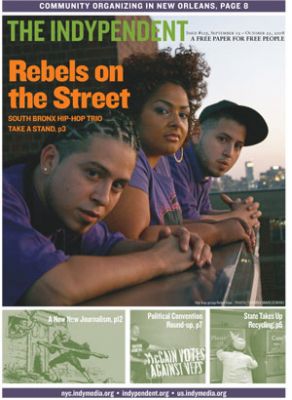 If you take a look at how well the bottle bill has worked with a 10- cent deposit in Michigan, you see how successful a program like this can be. With more than 90 percent of all soda and beer containers returned, it’s a great model. When the program was introduced, water bottles and sports bottles weren’t an issue. Now they are. Give a larger portion of the unreclaimed deposits back to the retailers who are on the front line of this huge issue. If it discourages disposable bottle purchases … oh, well. It’ll save our country 18 million barrels of oil a year!
—Julia

This keeps getting reported around the country that McKinney and Clemente are making history as the first all women-of-color presidential ticket, but it is not true. The Workers World Party nominated Monica Moorehead (African-American) and Gloria LaRiva (Latina) in both 1996 and 2000.
—David Gaines

Thanks for paying attention to WBAI. The station has money problems, basically because it cannot raise enough money through on-air drives to cover expenses (salary, office and studio space, rent for transmitting from the Empire State Building, payments to Pacifica national, etc.). Compared to other Pacifica Radio stations. WBAI’s costs are high. What needs to happen is either

a) the station cuts costs, perhaps becoming a smaller operation altogether, with a smaller over-the-air reach, or

b) the station makes a concerted attempt to provide programming that more people in our (very populous) listening area would tune in for and help us afford our antenna rent, etc.

Right now we are paying for the big signal, but not really using it to draw in enough listeners. That is an untenable course. One fact-correction: WBAI’s budget in FY08 called for $3.9 million in income (not $2.4 million).
—Jamie Ross, WBAI local station board, listener delegate, Pacifica Radio Board of Directors.

Right on! The fact is that listeners left in droves over the last six years — no sane person can be involved in WBAI at this stage. Between loonie Black nationalists, 9/11 deniers and quack health buts, its over. The Listener Station Board (LSB) meetings are farcical — North Korean-style zombies vs. idealogs from the 1960s and between them they have half a brain cell when it comes to a) RADIO, b) FINANCE. Solution: remove all the paid air staff and start over with new people mostly under 40 years of age. That way WBAI might have a chance. With the current “programmers” it’s curtains.
—Ex-Listener

When the WBAI was all white, people never complained about white supremacy and white nationalism. But now that some black people are there and airing programs geared to minority communities, people like Ex-listener (see above) gripe and talk about black nationalists. Many white listeners have stopped donating precisely because programming has been geared to address pressing issues specific to the minority communities. This is very needed, but people raise the red herring of the Pacifica mission. Even on issues that can help everybody like health shows, the ex-white listeners contemptuously dismiss a very qualified host as unqualified just because a former white host is no longer on the air. Those pointing fingers can’t see how biased they themselves are. Anyway, I’m confident the station will weather this crisis.
—Daddy Insider

WBAI is my station. It’s democracy and that’s not always pretty. Learning as we/they all “go.” I don’t like every program, every LSB board member, but I love WBAI. I get what I need. Fundraising is a problem. Okay, it’s been a long, hard (but I do stress long) success story. Power battles go on and on. Yet, I’m optimistic. Why? There’s a hard core of listeners who want the station to continue. And new listeners to be found.
—Sanda

TURN UP THE HEAT
Response to “The Macktivist: Trash the World Can Handle,” Sept. 12:

I found the hottest corset for my girl on Sept. 14, 2001. After the attacks on the WTC, when everything south of 14th Street was shut down, the stores all had 80 to 90 percent off liquidations sales. There was an old-school black corset with serious strappage that went for $500 retail, and I picked up for $75. Many nights of decadence were enjoyed. On the cheap, aside from the Osama Bin Laden Sale? Good luck. Cheap corsets don’t actually work, and the materials will be more uncomfortable than they are by design. You also forgot to mention that Babeland has an well-chosen, relatively affordable collection of gear like chokers, collars and other bondage gear. Much cheaper than Trash and Vaudeville, which sells overpriced junk. They do have a fine selection of fetish shoes and hip boots. Also try Purple Passion (in Chelsea) where the pro-doms shop. Those year-round halloween shops have surprises.
—fuego fuego