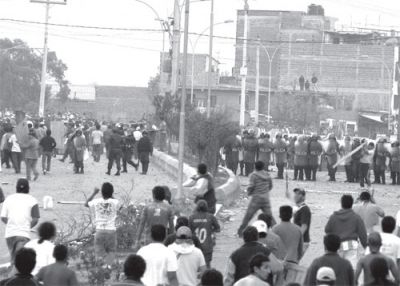 BOLIVIA ON THE BRINK: Right-wing youth activists and other opponents of Bolivia’s President Evo Morales tried to occupy a peasant market during anti-government demonstrations in the province of Tarija Sept. 10. People working in and around the market drove them away in clashes that left people wounded on both sides.

The battle over Bolivia’s proposed new constitution worsened dramatically during September as opponents of leftist President Evo Morales ransacked government offices, sabotaged a key natural gas pipeline and massacred scores of peasants in a wave of violence intended to destabilize his government.

The Morales government and the opposition have initiated talks to resolve the crisis, but all parties remain doubtful that the effort will bear fruit. If an accord about voting on the new constitution cannot be reached, supporters on both sides will mobilize, raising the possibility of more violence.

Bolivia’s latest round of turmoil followed an Aug. 10 recall referendum to decide whether President Morales and eight of the country’s nine departmental prefects (governors) should finish their terms in office or not. Morales received a stunning 67 percent support nationwide and two opposition prefects from departments in the country’s west were removed from office. The opposition prefects in the whiter, wealthier lowland departments of eastern Bolivia also received high levels of support, indicating that, although isolated politically, they maintain a strong regional base.

President Morales and partisans of his Movement Towards Socialism (MAS) party believed that his victory indicated enough support for him to call for a new referendum, this time to approve the draft constitution.

Although Bolivia’s Constituent Assembly concluded on Dec. 15, 2007, the proposed Magna Carta has been gathering dust in Congress due to the opposition-controlled senate’s unwillingness to approve a law that would let it go to a nationwide referendum.

One of the flashpoints in the new constitution revolves around land reform and “departmental autonomy.” Article 398 of the new constitution sets a limit on the maximum size of individual landholdings at 10,000 hectares (or roughly 25,000 acres). This article directly threatens the interests of lowland elites whose wealth is often based on massive landholdings. The document also provides many new constitutional guarantees for indigenous people and small farmers.

Departmental autonomy is another sticking point. Over the past five years, an autonomy movement rose in the lowlands led by local elites – represented in the Prefects’ offices and pro-business “civic committees” – who sought to increase the power of the departments at the expense of the national government. Departmental autonomy, for the autonomy movement, would give departments enough authority to override President Morales’ agenda.

The new constitution does include departmental autonomy along with three other types of autonomies – regional, municipal and indigenous. The central debate centers on how governmental powers be distributed between the national government, the departments and the other levels of government.

Hoping to bypass the bottleneck in the Senate, Morales approved a “supreme decree” after his August recall victory convoking a vote on the constitution, to the jubilation of his supporters and the outrage of the opposition.

Immediately, civic leaders and prefect offices in the lowlands called for civil disobedience, while right-wing youth groups scaled up their attacks on indigenous people and supporters of the president.

In the meantime, Bolivia’s National Electoral Court ruled that the President cannot authorize a referendum through decree and that only Congress can convoke referendums. Morales then backpedaled and stated he would respect the court’s decision and try to force the opposition in the Senate to give the go ahead.

Despite President Morales’ change of position, the right-wing groups in the lowlands did not cease their attacks, but rather launched a coordinated assault to destabilize the national government.

The results were the worst political violence Bolivia has seen in many years. Beginning Sept. 9, government buildings and airports were ransacked and occupied by right-wing partisans all over the lowlands. In Santa Cruz, members of the right-wing Santa Cruz Youth Union and other autonomy supporters took over the offices of several Indigenous organizations and those of the Centro de Estudios Jurídicos e Investigación Social (CEJIS), a prominant pro-indigenous and peasant non-governmental organization.

In Tarija, scores were injured in a confrontation between pro-autonomy partisans, who sought to sack a peasant market, and peasant organizations that came out to defend it. Additionally, a gas pipeline to Brazil was bombed that cut Bolivia’s natural gas exports to that country by 10 percent.

Only after the worst violence hit Pando, a tropical and sparsely populated department on Bolivia’s northern border, did the national government step in. According to eyewitness accounts, people in the employ of the prefect’s office ambushed with rifles and automatic weapons hundreds of peasants who were heading to a meeting of the regional peasant federation, killing scores including women and children.

In an interview with Red Erbol, a Bolivian-based community radio network, massacre survivor Vanesa Yubacero described her experience, “I was coming from the Nuevo Triunfo community. We arrived within five meters of the Puente Pozo bridge, and we were there when dawn came, and they told us that we should go back … We continued moving forward and the police detained us. We waited but no one gave us water. They surrounded us without giving us any time, and they shot the children. They died just like that, with bullets in their hearts. How those children cried, facing those machine guns.”

In response, Morales declared a state of siege in Pando, sent in the military to restore order and arrested its Prefect on charges of terrorism, murder, and conspiracy.

A RELUCTANCE TO USE FORCE

The Morales government’s reluctance to use force in putting down the rebellion could come from a number of directions. First, Bolivia still lives in the shadow of the “Gas War,” a popular uprising in October 2003 to block the government of Gonzales “Goni” Sanchez de Lozada from implementing a corporate give-away natural gas export deal. Just before resigning President Sanchez de Lozada repressed the protests, leaving more than 60 demonstrators killed in the streets. The massacre effectively delegitimized state violence and subsequent governments have hesitated to use force to put down unrest.

Second, the Bolivian state is historically weak, particularly in the eastern departments. The Morales government cannot count on state institutions to have the capacity to enforce the rule of law in the lowlands, which gives the autonomy movement a relatively free hand to bully government representatives and terrorize those in the pro-Morales social movements.

Lastly, although military commanders have remained loyal to the government thus far, some speculate whether they would remain so if Morales called out the troops to repress the autonomy dissidents.

In the midst of the violence, President Morales expelled Phillip Goldberg, the beleaguered U.S. Ambassador to Bolivia, accusing him of fomenting the country’s unrest. The government pointed to meetings between Goldberg and two opposition prefects and the U.S. funding of opposition groups through U.S. Agency for International Development and other agencies as evidence of U.S. meddling in Bolivian affairs. Ambassador Goldberg’s expulsion follows a rocky relationship with the Morales government since he took the job in 2006.

Other Latin American leaders reacted to the crisis by showing their support for President Morales. Venezuelan President Hugo Chavez expelled the US ambassador to Venezuela in solidarity with Bolivia and preemptively recalled the Venezuelan ambassador from Washington. He declared at a United Socialist Party of Venezuela rally on September, “The U.S. is behind the plan against Bolivia, behind the terrorism. We’re committed to being free. Enough shit from you Yankees.”

President Manuel Zelaya of Honduras also responded to the crisis in Bolivia by suspending an audience to receive the credentials of the new US ambassador to Honduras. An anonymous official in the Honduran government told Reuters, “The government decided to temporarily suspend the reception of the new ambassador’s letter of credentials in solidarity with Bolivian President Evo Morales.”

Indicating the increasingly close cooperation in the region, Presidents and other high-level diplomats from the 12 countries that make up the Union of South American Nations (UNASUR) met in an emergency conference in Chile to respond to the crisis in Bolivia. UNASUR subsequently issued a statement giving their “full backing” to President Morales and condemning the “coup attempt” in the lowlands. The organization also sent delegates to assist in negotiations between Morales and the opposition.

Dialogue between the national government and the opposition prefects began during the last two weeks of September. According to reports, progress has been made on side issues but not on the central issues of departmental autonomy and the new constitution.

Meanwhile, peasant and indigenous groups have given the president and the opposition until mid-November to hammer out an agreement. For these organizations, the new constitution represents years of struggle and must go to a national vote at all cost. If the Morales government fails to negotiate an accord, the Bolivian Senate will face tremendous pressure from mobilizations aimed at forcing them to allow the constitutional referendum to go forward.