Check back soon for a longer version of this article!

For evidence that the last eight years of Republican rule have represented continuous failure, some might point to the deceptive path to the disastrous Iraq War, the federal government’s “heckuva job” performance on Hurricane Katrina and now the great meltdown of a deregulated Wall Street.

But Thomas Frank, author of the superb recent bestseller The Wrecking Crew, explains such problems as the inevitable results of a new hardline conservative philosophy. This ideology views government first and foremost as a giant opportunity for private plunder, secondly as a resource to reward favored campaign contributors and finally, as a chance to show the public that they should rely exclusively on the market, not the hopelessly incompetent government. Judged by this standard, the Wrecking Crew Republicans have been spectacularly successful.

In case anyone draws another conclusion — say, that the problem is with Republican vultures ruling the roost rather than government itself — the Republicans try to wipe their slate clean by claiming that certain excesses were committed merely due to the capital’s “culture of corruption.” What’s needed are “mavericks” like John McCain and Sarah Palin who can come in and “reform” government with bold ideas like completing George W. Bush’s program of tax breaks for the wealthy and “winning” the disastrous war in Iraq. After all, they’re “outsiders” running against Washington. Somehow, even when the Republicans are in power, “The government is never theirs, no matter how much of it they happen to control,” Frank instructs us. 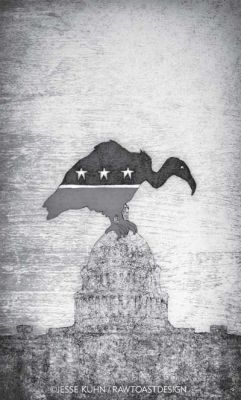 Frank depicts today’s Washington as “democracy buried under a deluge of money.” Fortunately for the reader, the story of the Wrecking Crew’s work is relieved by Frank’s biting but understated wit and his keen eye for revealing detail, making the book a splendid, yet disturbing read.

Frank illustrates how the K Street Project, spearheaded by then-House Speaker Rep. Tom De- Lay, entailed business lobby groups ridding themselves of Democratic lobbyists and contributing exclusively to Republicans, in exchange for unparalleled influence in crafting industry-friendly laws. “It was a win-win proposition,” Frank points out.

Grover Norquist, one of the central players in developing the ruling Republican strategy, lectured business leaders that they ought to invest more on campaign contributions and lobbying. Norquist pointed to a Fortune article that stated “the return on lobbying investments can be truly enormous,” using numbers like 163,356 percent profit rates to drive home the point. The porous border between lobbies and government brings us the spectacle of Rep. Billy Tauzin (R-LA), chair of the U.S. House Energy and Commerce Committee, ramming through a Medicare drug bill written precisely to the pharmaceutical industry’s specifications — explicitly forbidding the federal government from negotiating discounts for the public — and then being rewarded with a $2 million position as the president of the drug industry’s lobbying organization.

Even lobbyist Jack Abramoff’s downfall was dismissed by many conventional commentators as merely a inevitable case of him “going native” in the Washington “culture of corruption.” Meanwhile, the structural dependence of elected officials and candidates on ever-growing campaign contributions flowing heavily from America’s richest 1 percent — chiefly business leaders — was conveniently ignored. As Frank explains, “Instead of reinforcing the fragile institutions of civic trust you smash them, you encourage cynicism toward government, and if you get a chance you put the whole thing — conspicuously — on a for-hire basis.”

Thus, we have the U.S. Department of Labor defining business — rather than workers — as its “primary customer.” We see the occupation of Iraq privatized, with the number of $1,000-per-day mercenaries from Blackwater and other private firms roughly equivalent to the number of U.S. troops. Youthful Republican zealots were recruited by U.S. viceroy Paul Bremer to totally re-configure Iraq’s economy — without consulting any Iraqis — as a “free-market” paradise, eliminating even the most urgently needed government functions, like cement factories to build protective walls against explosions.

Much of Iraq’s worst aspects have been kept secret by Pentagon control of media access. But the full effects of the Wrecking Crew’s ideologically driven mismanagement were made clear to Americans by the pitiful response to Hurricane Katrina. As Frank acidly writes:

“By now over $100 billion has been spent, but parts of New Orleans remain empty. Repairing public housing seems to have been a low priority; rebuilding casinos an urgent one. All this might seem like social engineering in a cruelly 19th-century mode, but in fact it is the unavoidable result of a recovery plan comprised of tax cuts for entrepreneurs, fat handouts to chosen contractors and toxic trailers for those who can’t afford big handouts to the GOP.”

This shameful episode reflects more than greed and opportunism in the face of unspeakable misery, Frank warns us. As the muckraking journalist Lincoln Steffens put it, the corruption of recent years is not simply a string of separate crimes but “a natural process by which a democracy is made gradually over into a plutocracy,” a government by and for the wealthy.