Earlier this year, Craig Schley was helping organize community opposition to the rezoning of the 125th Street corridor, a pet project of Rep. Charlie Rangel. Now, Schley finds himself running an underdog independent campaign against Rangel, the 19-term Democratic incumbent from Harlem who has helped generate a wave of gentrification and mega-development projects in his district.

“I believe in maintaining the integrity of the community and culture by developing and building low-income housing so you secure a workforce that will sustain the type of businesses making money off its culture,” says the 45-year-old Schley. A former firefighter and model with a degree in political science, Schley describes himself as “a blue-collar man with a white-collar education.”

Running under the banner of the “Voices of the Everyday People for Change Party” that he founded, Schley gathered 6,000 signatures, nearly twice the 3,500 needed to secure a spot on the ballot. He has a volunteer staff of 10 and appears almost daily at senior centers, bookstores, churches and anywhere else he can find an audience.

Schley’s campaign has raised about $13,000 this election cycle while the watchdog website opensecrets.org reports that Rangel has amassed $4.82 million from his perch as chairman of the U.S. House Ways and Means Committee, which writes all federal tax legislation.

Rangel, the fourth-longest serving Democrat in Congress, has been dogged by scandals this year, including the discovery that he had failed to report taxable income from a villa he owns in the Dominican Republic to that he was living in four rent-stabilized apartments in Manhattan. Rangel is currently the subject of a U.S. House Ethics Committee investigation. His close ties to the real estate industry have exasperated many constituents desperate for affordable housing, while his outspoken support for Hillary Clinton in her primary race against Barack Obama has stirred talk that Rangel is out of touch with the community. 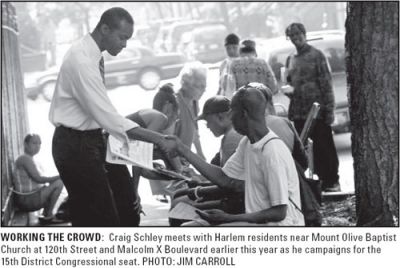 “I think Rangel is not effective anymore in this community,” says Marietta Ford, a 23- year resident of Harlem. “He has been there for 40 years, and I’ve seen the gentrification of Harlem, there’s no affordable housing anymore. People don’t have jobs,” she says. “I think he doesn’t represent the people of the district anymore … I am one of the people who are fed up.”

“I go door to door to let people know they shouldn’t vote for Rangel anymore,” says Carolyn Noel, a Harlem resident for more than 50 years. She added “[Schley] is a viable candidate and we’re behind him 100 percent.”

The 15th Congressional District stretches from the Upper West Side to Washington Heights/Inwood and includes Rikers Island and a part of northwestern Queens. While Rangel remains confident, his support of freetrade deals has also stirred opposition. Critics say pacts like the North American Free Trade Agreement (NAFTA) and the Central American Free Trade Agreement (CAFTA) have helped send tens of thousands of high-paying manufacturing jobs from New York State to low-wage nations in the Global South.

New York State has lost some 200,000 manufacturing jobs since 2000, and according to analysis by the Economic Policy Institute, New York could potentially lose another million to off-shoring.

“The continued outsourcing of New York jobs is not inevitable,” says Mark Bergen, director of the New York Citizens Trade Coalition. “Failed trade policies like NAFTA give expansive protections to U.S. firms that ship investment and jobs offshore. If we change our trade policy, we can change the future and keep jobs in the state rather than shipping them overseas.”

“I am against NAFTA and CAFTA and what it stands for: imbalanced trade and the loss of jobs,” Schley says. “One is unable to discuss trade without labor rights and these international trade agreements erode rights.”