A review of ’Scuse Me While I Kiss the Sky By David Henderson
Updated Edition. Atria, 2008

I Have Fun Everywhere I Go By Mike Edison
Faber and Faber, 2008 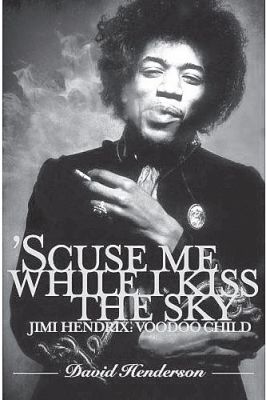 Nostalgia gets on my nerves. I’ve been to too many punk-rock shows where kids walk around in the T-shirts of bands that broke up before they were born, recycling costumes and musical formulas that were very well worn 20 years ago. You can never relive history, but you can buy all the artifacts and refine the poses.

On the other hand, you need to know your history, which brings me to two recent rock ’n’ roll books. One is David Henderson’s reissued Jimi Hendrix biography ’Scuse Me While I Kiss the Sky. It traces Hendrix’s life from his childhood in Seattle through backing Little Richard and the Isley Brothers on the chitlin’ circuit, scuffling for freedom in the coffeehouses of the protohippie Village, going to England in 1966, and international psychedelic stardom until his death in 1970.

Henderson, a Lower East Side poet, knows how to flow, vividly trying to approximate the feel of the music in words — “the clave chord kicks off the guitar battery again. Sounding like the rhythms of several African congas, the electronic metallic overdriving oscillating Stratocaster keeps the rhythm throb close to the pulsations of a red emergency light.” And he knows Hendrix’s world, the Afro-American side of the 1960s counterculture, intimately.

The new introduction, however, is the most dubious part. Henderson argues that Hendrix did not die of a drug overdose, but was murdered. The ambulance drivers who picked him up said he was covered in puked-up red wine, from which Henderson concludes, “he was drowned.”

A far more plausible scenario, in all accounts cited by Henderson, is that Hendrix was severely stressed and depressed in the last few months of his life. “After a while your bullets don’t even cause me pain,” he’d sung on “Machine Gun.” A manager who’d signed him for a dollar in 1965 had sued him and won the rights to the Band of Gypsys live album, Hendrix’s then current and most political record. (Hendrix’s personal politics mixed commitment to nonviolence with support for the Black Panthers.) The last show he did, a week and a half before he died, was at a German rock festival where three people were murdered and a roadie shot in the leg. They then cancelled the tour because bassist Billy Cox, Hendrix’s oldest and steadiest friend, had suffered a nervous breakdown after being dosed with LSD. And the night of his death, he’d gone to a party and had a screaming match with his girlfriend. She told investigators he’d taken up to nine sleeping pills when he got home.

So would it not be more likely that Hendrix came home drunk, swallowed a bunch of pills, and then puked up the lot and choked to death? The ambulance drivers quoted by Henderson say no one was there when they arrived, which implies a different damning scenario: that most of Hendrix’s entourage, including his girlfriend, were more concerned about keeping themselves out of trouble than they were about getting him medical help.

Methinks Henderson doth protest too much. He’s got the noble aim of trying to assert Jimi Hendrix’s credibility as a musical genius, not just another dead dopefiend. But no one who knows anything about electric guitar questions Hendrix’s genius. He played with a unique fusion of psychedelic abandon, technical skill, and deep blues roots; pioneered the sonic vocabulary of guitar distortion; and did things no guitarist has yet duplicated. His influence stretches from metal to PFunk to Nas. If he’d lived, he would have likely collaborated with Miles Davis, who was then cutting landmarks of electric jazz. And although Hendrix’s drug intake was considerable, he wasn’t a heroin addict or alcoholic like Hank Williams, Billie Holiday or Charlie Parker, all of whom have secure places in the pantheon of 20th century American musical geniuses. 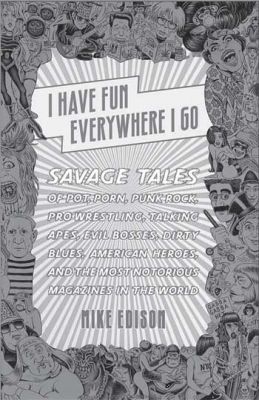 Written with the bravado of a bad-guy wrestler, I Have Fun is self-aggrandizing as fuck and not 100 percent accurate, but it’s a highly entertaining read. Edison skewers nearly everyone on the High Times staff, from the viciously stingy business manager to the conspiracy-nut editor-in-chief, who had “hideously morphed” from a visionary idealist into a sanctimonious bully who “would babble on incoherently about CIA plots, stoner reality shows he was going to make millions from, and his dream of moving the High Times office to Woodstock.” (I worked there too. He says I looked “like some sort of mad scientist who had blown himself up in a failed chemistry experiment” but often got drowned out because I “didn’t share the pot-fueled delusions of grandeur the other editors were infected with.” Fair enough.)

Like I said, it sometimes has more ego than fact. Edison casts himself as the hero trying to be rebellious and outrageous and still make money, but he was far from immune to the power trips that afflicted the High Times hierarchy. He mocks the news staff for complaining when ads bumped their “updates on Michigan hemp activists” — but those Michigan hemp activists were Tom Crosslin and Rollie Rohm, killed by the FBI and state police in September 2001 after a long feud with the local Christianright prosecutor.

I got along with Edison a lot better after he was no longer my boss, and we could bond over our tastes for cheap old guitars and raw blues. Hey, Mike, if you’re reading this, you still got my Live on Maxwell Street CD?