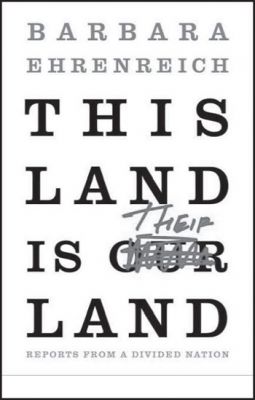 A review of This Land is Their Land By Barbara Ehrenreich
Metropolitan Books, 2008

Most of the 62 essays in This Land is Their Land are op-eds previously published in the New York Times, The Progressive, The Nation or on Ehrenreich’s blog. But even if you’ve read them before, they’re still a poke in the ribs to get us off our duffs and into the streets.

The growing class divide is a recurring source of irritation to Ehrenreich and she brilliantly hones in on the excesses of those on the highest economic rungs. In “Children Deserve Veterinary Care Too,” she reports that in 2007 Americans spent $10 billion on medical care, including CT scans, MRIs, dialysis, chemotherapy, and underwater treadmills for Fido, Fluffy and Fredericka the ferret. While no one is suggesting animal cruelty, Ehrenreich posits the notion that something is radically wrong when some folks can shell out a fortune to treat ailing pets while others live in households where kids die from treatable illnesses because their families can’t afford to take them to a doctor.

“In many ways, children stack up well compared with common pets,” Ehrenreich quips. “They can shed real tears, like Vietnamese pot-bellied pigs. They can talk as well as any of the larger birds … And if you invest enough in their care and feeding, they will jump all over you, yipping and covering your face with drool, when you arrive at the door.”

Humor and wit are in abundance here, but the overall message is bleak: At the same time that a small number of corporate big-wigs have embraced a level of extravagance last seen during the Roman Empire, ever-escalating costs for healthcare, housing, food, fuel and college have enfeebled the working classes. Ehrenreich calls it an “explosion of gluttony at the top,” and like all gluttony, it is sickening.

Indeed, the juxtaposition of three billion people worldwide who live on less than $2 a day with those taking private planes to exclusive resorts in the Galapagos Islands is mind boggling. Ehrenreich relentlessly hammers the point that such chasms are immoral. She zooms in on corporate giants like Wal-Mart — famous for paying workers so little that they qualify for Medicaid and food stamps — as promoters of the rift and is apoplectic that the store’s underpaid workers can’t afford the schlock displayed in its aisles.

She also skewers job outsourcing, the Religious Right’s preoccupation with gay marriage, gentrification, the torture of Iraqi prisoners, immigrant scapegoating and the idiocy of spending $100 million a year on abstinence training. In a hilarious interview with Joneen Mackenzie, executive director of the pro-abstinence group, Why Am I Tempted? (Yes, the acronym is WAIT), Ehrenreich quotes Mackenzie as saying that she, herself, is not abstinent and actually behaves “like an animal” when fulfilling her wifely duties.

Ehrenreich feigns dismay. “Abstinence training should be restricted to abstinent people,” she tongue-in-cheekily concludes. “Would you undergo computer training with someone who hasn’t touched a computer since 1987? Would you hire a flabby, out-of-shape personal fitness trainer?”

The cliché that you laugh until you cry takes on new meaning when reading This Land is Their Land. Incisive, trenchant and furious, it celebrates the have-nots. At the same time, it asks an important question: What will it take for America’s beleaguered residents to rise up and say, “Enough”? At one time in history, people believed songwriter Woody Guthrie’s assertion the American landscape belonged to those whose labor sustained it. “How many wake-up calls do we need?” Ehrenreich asks. The answer should be obvious.