For Julius Tulley, a former sergeant in the National Guard, the fact that President Bush was able to launch the Iraq War is as frightening as his battles against the insurgency. “How can you vote for someone who tried to kill me?” he wonders about Bush’s reelection in 2004, implying that it allowed the war’s continuation.

Tulley (Sam Paul) is one of 17 actual Iraq War veterans featured in In Conflict, an eye-opening show currently playing at the Culture Project. Like previous Culture Project productions, In Conflict was adapted from a piece of journalism, a book of the same title by reporter and New York University professor Yvonne Latty. Latty appears occasionally on two television screens flanking the stage to reflect on her interviews with the veterans, which helps to ground the actors’ monologues in the audience’s reality.

Each actor portrays a veteran profiled in the book in what is essentially a reenactment of Latty’s one-on-one interviews with returning soldiers. Each monologue attempts to answer the question “what happened?” and adeptly captures each soldier’s character — his or her personality quirks, reasons for joining the military and roadblocks in coping with the emotional scars of war.

Transporting us into the minds (and apartments and hospital rooms) of physically and emotionally wounded veterans who range from national guardsmen to medics, In Conflict makes a strong antiwar statement without dwelling overly on geopolitics.

Fidgeting in a chair, drink in hand, former U.S. Army Private Herold Noel (Damon Williams), currently homeless and suffering from post-traumatic stress disorder, recalls witnessing an army convoy running over an Iraqi baby whose mother had been mistakenly shot at a checkpoint. The unease that struck the audience then was as palpable as the guilt and rage etched on Noel’s face. It immediately became clear that veterans and Iraqi civilians are in the same boat, pawns in a reckless neocon war game.

No matter their background — Mexican immigrant or Georgetown graduate — the veterans profiled in In Conflict are left to suffer with little government or public support, reflecting the reality of many veterans, despite repeated promises by the Bush Administration to “take care of” Iraq veterans. Meanwhile, countless others are shipped out to a conflict with no apparent end.

In Conflict is playing at the Barrow Street Theatre, 27 Barrow St. (at Bleecker Street) through Nov. 16. 212-243-6262 or barrowstreettheatre.com 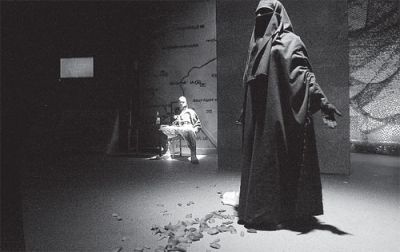