“Hand over the money. Or else.” That was the message, in so many words, that Treasury Secretary Henry Paulson delivered to Americans after the financial markets went into a free-fall in mid-September. Paulson’s demand for a $700 billion bailout of Wall Street had all the subtlety of a convenience store stick-up, and the two major presidential candidates quickly acquiesced.

“This is something that all of us will swallow hard and go forward with,” said John McCain. “The option of doing nothing is simply not an acceptable option.”

“There will be time to punish those who set this fire, but now is the moment for us to come together and put the fire out,” said Barack Obama.

After being told for decades that any government action in defense of the common good was wasteful and immoral, an angry, frightened public is being told by its leaders that a massive rescue of the super rich (but no one else) is essential to our survival. Instead of explaining how we really got into this mess (see page 10) or highlighting sensible alternatives (see page 13) to the Bush administration’s plan to pay inflated prices for near-worthless securities, the media is also sounding the trumpet of national sacrifice.

As The Indypendent goes to press, it appears Congress will pass a new bailout bill festooned with tax cuts. But don’t hold your breath waiting for the wealthiest nation in history to provide universal health care or universal higher education or to invest massively in rail and mass transit, wind and solar technologies and myriad other things that will make for a healthier and more sustainable society. The money is there. The piñata has been broken open. It’s just a question of priorities and political will. If we’re going to have socialism for Wall Street, how about a little bit for the rest of us? 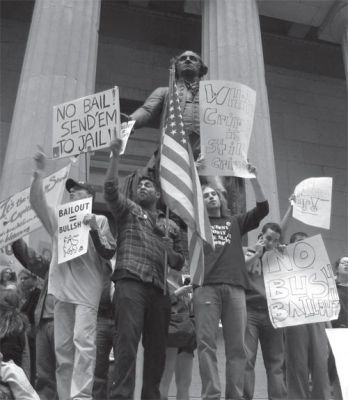 TURMOIL ON WALL STREET: Protests against the $700 billion bailout took place in scores of towns and cities Sept. 25. In New York City, approximately 1,500 labor unionists gathered for a lunchtime rally just south of Wall Street. Later that afternoon, about 400 people marched up Broadway from the Merrill Lynch bull to the corner of Wall and Broad Streets where they heckled traders exiting the New York Stock Exchange with chants like, “You Broke It, You Bought It!” and “You Fucked Up, Suck It Up!” Dozens of media outfits were on hand for the march on Wall Street and organizers vowed to continue demonstrating against the proposed bailout.

The protests were sparked by a call to action sent out three days earlier by Arun Gupta, an editor at The Indypendent. “This crime is without precedence and we can’t be silent!” he wrote. “What’s the point of waiting for someone else to organize a protest two months from now, long after the crime has been perpetrated?”

Composed as an email to friends, the message quickly went viral and spread like wildfire across the Internet, and liberal groups like True Majority and United for Peace and Justice also adopted Sep. 25 as a day of protest against the bailout.

“I’m a journalist, not an organizer,” Gupta said afterward. “But we all live in the real world and have to act in it.”

SHOCKING BUT NOT UNEXPECTED

In The Shock Doctrine, Naomi Klein traces 35 years of U.S. government and corporate complicity in everything from military coups, economic collapse, endless wars to the aftermath of natural disasters to advance a radical right-wing agenda that the public would never accept under normal circumstances. Under “disaster capitalism,” calamities — both natural and man-made — are the ultimate business opportunity.

Klein’s book was first published in September 2007. It has since gone on to become a worldwide bestseller translated into 26 languages. Recent events certainly haven’t disproven her thesis. In a Sept. 22 column on HuffingtonPost.com she noted, “I wrote The Shock Doctrine in the hopes that it would make us all better prepared for the next big shock. Well, that shock has certainly arrived, along with gloves-off attempts to use it to push through radical pro-corporate policies.”

For all of The Indypendent’s current and recent economic coverage, follow the links below!