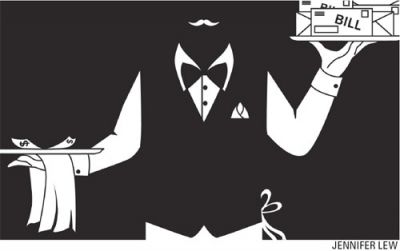 Probably the worst thing about waiting tables is relying on other people’s generosity for a living, especially during a financial crisis.

As a waiter in the Upper West Side, I’ve seen a flourishing boutique restaurant become deserted, and my personal bottom line plummet like the Dow Jones Industrial Average in only a matter of weeks.

As the financial crisis goes from bad to worse, I find myself wondering, along with my coworkers, Wall Street and “Main Street” — how much worse will the economy get and what am I going to do?

When I started at the restaurant in March 2008, during a now e cl ips ed s lumping economy, 20 percent of the customer’s bill was the standard tip. In a week, I could expect about $500 dollars for working five or six 7-hour shifts.

Those times are gone.

Business began to ebb in June with the summer heat. I thought it was a fluke at first and used the spare time in the restaurant to read, relax and watch baseball on the bigscreen TV. Since then, I’ve become worried, and now broke.

Customers come in so infrequently that we sit alone in the dining room for hours at a time; at time of the usual dinner rush only a few tables are filled, and the guests who do come spend far less than they did three months ago.

The 20 percent tip is long gone as well. Many of the tips are just rounded to the nearest even dollar (on a $74.50 check, the customer will just write $80 as a total).

Recently, I worked 39 hours in a week and made $270. The restaurant, as well, is no longer earning money — a complete change from the restaurant that once had a wait-list on any given day of the week.

To make up the difference, the owners laid off some of the staff. In about two weeks, several managers, busboys, porters and kitchen workers were gone. Each day, about five or six recently unemployed waiters and busboys come in looking for work.

The situation at my restaurant is not unique. More than 165,000 people work in the city’s restaurant industry. Along Columbus Avenue, where my workplace is located, other casual dining venues are as empty as mine. Friends who work in fine dining restaurants say that business has slumped. Friends who work at high-end bars say business isn’t even close to what it used to be when finance companies would buy out the bar for thousands of dollars on Friday nights.

Nationwide, restaurant business analysts are calling this the biggest recession in the industry since 1991. Food service consultancy firm Technomic recently revised its 2008 forecast, decreasing the expected growth rate from 5.1 to 3.6 percent.

According to NPD Group, a company that monitors consumer activity, the restaurant industry has seen less traffic for several years; however, it saw actual sales decline for the first time in two and a half years the week of July 28. Worst hit, they said, were independent restaurants like mine.

It’s frightful news for someone like myself who is barely able to pay his monthly bills, which are still far lower than most people I know. I wonder when it will be my time to find a second job, move in with my parents or have to decide which bill I will not pay.

Insurance? I have none. And job security? I signed that away when I was hired with an “at-will employment agreement” that means I can be fired or laid off for any reason.

It’s the same fear I detect in our customers. There are businessmen who come in late at night or early in the morning before work to confide their worries to coworkers. Their conversations, which I listen in on by hovering near the table, are about what is going to happen to their department, where to safely stash their money, and, like everyone, when the economy is going to turn around.

The middle-aged, life-long bartender at the restaurant says that business will come back, and that people are just in shock. As the saying goes, “liquor is recession-proof.” He may be speaking only for himself, but I sure hope the diners come back too and spend like they did before.