MILITARY READY TO QUELL PROTESTS
The U.S. Army has deployed an active-duty unit inside the United States for the first time to serve as an on-call federal response in times of emergency. On Oct. 1, the 3rd Infantry Division’s 1st Brigade Combat Team was deployed under the day-to-day control of the Colorado-based Northern Command. The Army Times reports this new mission marks the first time an active unit has been given a dedicated assignment to Northern Command. The paper says the Army unit may be called upon to help with civil unrest and crowd control. The soldiers, many of whom have spent years in Iraq, are learning to use so-called non-lethal weapons designed to subdue unruly or dangerous individuals and crowds.

A SURGE IN SKEPTICISM
A team of UCLA geographers have uncovered evidence that last year’s drop in violence was due not to the U.S. military “surge,” but to a reduction in ethnic-based conflict, which peaked shortly before the February 2007 surge. The geographers used satellite images to examine night-time light levels in Baghdad neighborhoods. They found that night light in Sunni neighborhoods declined dramatically just before the surge and never returned, while in Shiite neighborhoods, light output remained constant or increased. “By the launch of the surge, many of the targets of conflict had either been killed or fled the country, and they turned off the lights when they left,” said UCLA Professor John Agnew. Said UCLA Professor Thomas Gillespie, “If the surge had truly ‘worked,’ we would expect to see a steady increase in night-light output over time. Instead, we found that the night-light signature diminished in certain neighborhoods, and the pattern appears to be associated with ethno-sectarian violence.”

AFGHANISTAN STARVES
While both U.S. presidential candidates suggest that military action must be refocused and intensified in Afghanistan, reports have found that the war-torn nation is facing a worsening food crisis as winter approaches. One-quarter of the population could face acute food shortages. The price of wheat has risen sharply since the beginning of the year due to export bans from Pakistan, drought and a poor spring harvest. The nation is largely dependent on food imports and other aid, which was hit hard by a rise in fuel prices this year. “It is really getting tougher and tougher as the day goes. People are hungry and angry and hungry people can do anything,” said shopkeeper Abdul Mateen in the northeastern province of Badakhshan in a Sept. 29 interview with Reuters. 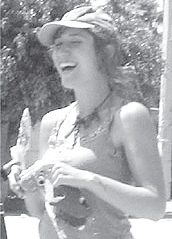 U.S. ACTIVIST MURDERED
A crowd protested outside the U.S. consulate in Oaxaca, Mexico, Sept. 25, calling for justice for Marcella “Sali” Grace Eiler, a 20- year-old American human rights solidarity worker who was brutally raped and murdered. The following day, Omar Yoguez Singu, 32, was taken into custody for the murder. Activists were quick to place Eiler’s murder in the context of rampant unchecked violence against women in Oaxaca. Eiler spent time in Oaxaca serving as an international human rights observer, photographer, Indymedia journalist and translator. Narco News reports she recently accompanied family members of a witness in the case of murdered New York Indymedia journalist Brad Will.