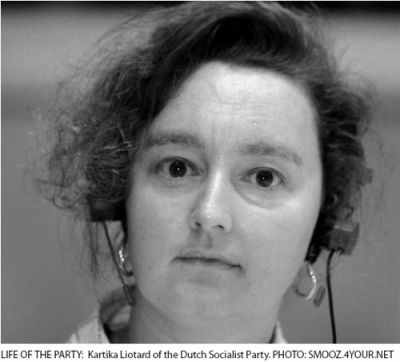 Three days before the presidential election, Dutch Socialist Party member of the European Parliament Kartika Liotard met with the New York City chapter of the Socialist Party USA at the A.J. Muste Institute in lower Manhattan to share her experience of building a widespread grassroots movement.

“People were looking for something different,” said Liotard, who has spent 21 years helping to create a party that is strong on the streets and a winner at the ballot box.

In a small country of 16.5 million people without a substantial left-wing tradition, the Dutch Socialist Party (SP) has more than 60,000 members and is the third-largest and fastest-growing of the Netherlands’ ten parliamentary parties.

Founded in 1972, the SP holds 25 of 150 seats in the Netherlands lower house of parliament, which allocates seats based on the proportion of the popular vote. This is the equivalent of holding about 72 seats in the 435-member U.S. House of Representatives, although the U.S. system of winner-take-all voting would make this much more difficult to achieve. Liotard is one of 27 members of her party elected to represent the Netherlands in the 785-member European Parliament.

Liotard explained that the Dutch SP achieved success by creating an egalitarian socialist movement, built on the experience and practice of its members. Guided by three core concepts of human dignity, equality and solidarity, the party rejected the notion of a top-down socialist movement and insisted on full representation of members’ interests and needs.

“We knew we had to create a new kind of modern socialism,” Liotard said.

The SP is dedicated to the principles of a generous social welfare state and public ownership of key sectors of the economy. In the short-term, its members are working to alleviate the more egregious harms of the capitalist state. At the beginning, two or three SP members would travel to a neighborhood and listen to community concerns. Was there too much garbage on the street? Not enough lights on at night? No facilities for the elderly? Once the needs were identified, the SP would help to organize local people to solve those problems. The SP also cooperated with trade unions, helping during strikes and working to reform labor law.

This strategy eventually led to the election of socialist members at the local and regional level, and by 1996, the SP had its first national representatives in the parliament. The SP began to be identified as the party of the working class, in part by people who felt the older and larger Labor Party no longer represented them. As the SP became more successful, the party made an important decision. SP members in all levels of office would draw an average salary, with any excess money returned to the party. This would give the party more financial resources to address issues of concern to their members.

For example, Liotard said the Dutch SP is leading the way in outlawing the use of asbestos and helping the victims of asbestos-related illnesses — a campaign supported in part by the salaries of SP-elected politicians.

Other sources of funding come from the sliding-scale dues paid to the party by its members. In addition, people donate their time, which means a little money can go a relatively long way.

With success, the SP increased its focus on maintaining a close, transparent relationship with people at the grassroots level. As the largest opposition party in parliament, the SP had a chance to join in the ruling coalition with Christian Democrats and the Labor Party after the 2006 elections, but ultimately decided that the level of compromise was too high.

The “secret,” then, of a dynamic socialist movement turns out to be not so secret after all: intense, local, highly adaptive community organizing done by hard-working people who did not let their small numbers or their failures deter them at first and who so far have not let their growth or electoral success take them away from their base.

Liotard ended her discussion with a grand prediction. “I’ll come back next year and we will be in a huge hall,” she said.