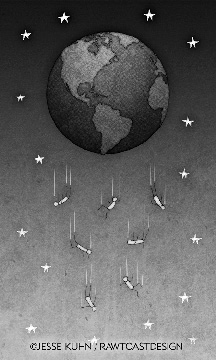 How Shall I Live My Life?: On Liberating The Earth From Civilization
by Derrick Jensen
PM Press, 2008.

Derrick Jensen’s 2006 epic Endgame was a rambling but provocative dissection of the environmental and political ills of civilization. Surveying the damage wrought by civilization, from dammed rivers to genocide, Jensen presented his solution: in order to save the planet, committed activists should work to bring down civilization in its entirety by “any means necessary.”

Many readers who consider themselves politically radical may find Jensen’s conclusion both dangerous and preposterous, yet Jensen has an avid army of fans who pack auditoriums to hear him speak and a popular but closely guarded internet forum.

However, even these fans may find themselves slightly disappointed by Jensen’s latest book, How Shall I Live My Life?: On Liberating the Earth from Civilization, which consists of previously published interviews conducted by Jensen between 1999 and 2001. The time lag between the interviews and the book’s publication can make the collection seem out of date. In an interview with the anti-car activist Jan Lundberg, much time is devoted to the topic of peak oil, yet we learn nothing new about our current energy crisis and oil prices that have oscillated wildly in the last few months.

But despite the lag, there are ideas of lasting value in How Shall I Live My Life, even for those who reject Jensen’s all-or-nothing approach to civilization. The book presents an appealing diversity of voices, each articulating a different vision of environmental activism. The interviewees include Thomas Berry, an environmental activist and Catholic monk; Jesse Wolf Hardin, the founder of the radical group Earth First!; Vine Deloria, the late American-Indian activist and writer; and Carolyn Raffensperger, a lawyer who campaigns against corporate abuse of public safety.

One of the most engaging interviews is with Kathleen Dean Moore, a philosopher based at Oregon State University. Moore passionately argues against mechanical and abstract thinking in favor of a deeper connection with place. “What I am recommending,” she says, “is a way of life that is rich with noticing. Caring. Remembering. Embracing. Rejoicing in … the smell of a child’s hair, or the color of storm light.” This and other interviews serve as useful introductions to the work of less-known environmental thinkers.

This book may also appeal to readers who are put off by the hubris of the anti-civilization movement, of which Jensen is a leading figure. Jensen’s Endgame may be a radical manifesto, but its vision of small groups of committed foot-soldiers working to bring about a natural utopia is also strangely old-fashioned. Endgame’s emphasis on revolution and vanguards seems out of touch with the democratic spirit of recent anti-capitalist and environmental activism. The diversity of How Shall I Live My Life, on the other hand, seems more in tune with this activism. Despite a subtitle of Liberating Earth from Civilization, most of the interviewees do not seem interested in a tactically impossible struggle against a supposedly monolithic civilization. Instead, they promote diverse paths toward a deep connection to place and nature — a connection that could lay the basis for significant social transformation.