The Indypendent’s Jaisal Noor sat down with two veteran progressive journalists to discuss the impact of New York City Mayor Michael Bloomberg’s plan to run for a third term, what might be expected from the administration of President-elect Barack Obama and the role of community-based, grassroots organizing. 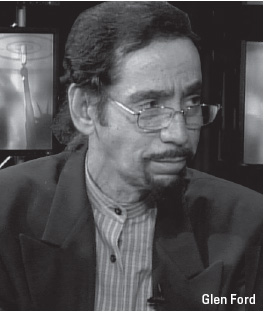 Jaisal Noor: What are the stakes now that Barack Obama has been elected president?

Glen Ford: The September [economic] meltdown was not just an ordinary occurrence, not just part of the boom-and-bust cycle of capitalism. It resulted in the capitalist system as it operates economically and in terms of power, being grievously wounded — some of their institutions put out of business. What the project is now — the ongoing project — is to restructure the way the United States develops. It’s that fundamental.

GF: [Now that] Barack Obama is president elect, [we are] in the transition period. These months of transition will see the redistribution of several trillion dollars by Jan. 20; the changes that have been instituted will be irreversible.

Therefore it is incumbent upon progressives not to wait until Jan. 20, but to start agitating right now with President-elect Obama, who can effect some alteration of that scheme as president-elect.

JN: A lot of people are excited about the 2008 election, but will there be a huge letdown by the time the 2009 New York City election comes around for the mayor and the City Council. What’s your message to people involved in politics or who have become involved in politics for the first time?

GF: The meltdown had extremely intense effects in New York City, which is the home of these same investment banks. They in conjunction with billionaire mayor [Michael Bloomberg] — created little power centers through their philanthropy. They created power centers in Harlem, and in other areas of the city, to smooth the way for the gentrification of these neighborhoods. At this juncture, the bought-off politicians in Harlem and in other neighborhoods in the city don’t have a sugar-daddy anymore. They are exposed. If Bloomberg is elected to a third term he has the wealth to fill this void, which makes it even more crucial to defeat him.

JN: Now we even have more to lose, because it is taxpayer money that’s going to invested in these gentrification projects.

GF: In fact what has occurred is that the investment banks have stuck their trunks into the wealth of the country in order to resurrect themselves after this great debacle. They can no longer fulfill the mission that has historically been assigned to them … which is to decide which sectors of the economy, which neighborhoods of the city will be developed — which populations will stay and which ones will leave.

All of those were private decisions often facilitated by corporate influence in government, but not based upon what the needs of the people in the city are. It’s time for activists to rise up and demand a people’s plan — plans that put the people’s money in service of the people — to anchor the currently existing population in place. This is the challenge to activists — to actually have a plan for development that they can use as a counter to corporate plans or to Bloomberg’s plans that serve the corporations.

For more, go to blackagendareport.com. 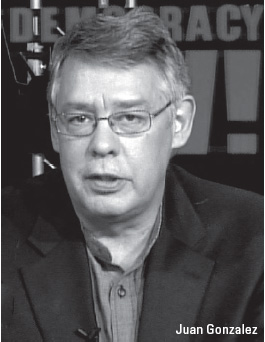 INTERVIEW WITH JUAN GONZALEZ, columnist with the New York Daily News and Democracy Now! co-host. Three years ago he authored Where Have All The Fighters Gone? An Analysis of New York City Mayoral Race of 2005.

Jaisal Noor: Can you give a historical context for the Bloomberg administration?

Juan Gonzalez: What I think this is part of is a vast re-engineering of the American city that has been going on for the last 30 years.

In the early 1960s and into the 1970s, corporate America had a problem. The central cities were becoming increasingly Black, Hispanic and poor, but the cities were the fulcrum of all economic activity in America. They were the banking centers, industrial centers, and the riots and rebellions of the 1960s and 1970s made clear to America’s corporate elite that they were losing control of the cities. It was also reflected in the 1970s by the increasing election of Black and Latino officials to city councils and mayoralties throughout America. So the corporate elite realized that they were not only losing social control, they were losing political control. So you had then the beginning of a whole process to try to reclaim the cities. Gradually, political leaders reached a conclusion that there were other ways to spatially de-concentrate or gentrify the cities through the use of land policies and tax policies. So tax policies were adopted that in essence gave preferences to developers that built certain types of housing.

JN: What would be the consequences of a third term for the Bloomberg administration?

JG: Bloomberg has engineered what I call a velvet coup in New York City politics. He has, in essence, increasingly reduced the powers of other elected officials and of city government in general and replaced it with administrative or executive power which is concentrated in the hands of the mayor, especially when it comes to what to me is the most important issue in any city — in modern times — land policy.

The Bloomberg administration has been involved in a massive rezoning of the New York City neighborhoods, usually upscale rezoning. It has attempted in more wellto- do, powerful neighborhoods to downzone, in essence protecting those wealthy neighborhoods from further development or over-development. But in poor neighborhoods and working-class areas of the city and the central city core it has been up-zoning all of these neighborhoods.

The other thing that it [the administration] has done is that it has moved land out of the control of city government and into the control of the New York City Economic Development Corporation. This is land technically owned by the IDA [New York City Industrial Development Agency] or EDC [New York City Economic Development Corporation], therefore off the tax rolls. Then the IDA or EDC create special deals with private developers, where developers can develop land that is technically publicly owned, but is in reality privately operated.

JN: One of the most important points in your piece three years ago was your criticism of the progressive movement. You wrote how it is divided on ethnic and class lines, and there is a disconnect between the middle-class progressive movement and the realities of urban America. Where do you think the movement stands today?

JG: I think the progressive movement is still much more interested in international affairs … than it is in what’s going on right here, in the neighborhoods of the city. Part of it is that most progressives are middle class and are not that connected to everyday situations that occur in the city. And also the fact is that someone like Bloomberg can be confusing to progressives, because on many social issues he is relatively moderate. He seems to maintain a veneer of progressive thinking or enlightened ideas, and he’s generally not a belligerent man himself in his dealings with community leaders and other political rivals. So as a result of that, they are lulled into thinking, especially after eight years of [former Mayor Rudolph] Guiliani, that Bloomberg is a breath of fresh air.

I think he is actually more dangerous, precisely because it takes a little bit more work to analyze how it is that his policies are reactionary. And I think as a result of that many progressives are disarmed. And you have the other problem, that because he has so much money, he is able to provide grants to lots of community organizations and those community organizations then in essence have a conflict in being able to adequately critique the mayor because they are receiving funding from the mayor. Bloomberg is one of those rare politicians that … can’t be bought — he does the buying. He has enough money to carry out this enormous social bribery with community leaders and nonprofits throughout the city.

Listen to the interview (26 minutes):

To read Where Have All The Fighters Gone? An Analysis of New York City Mayoral Race of 2005 by Juan Gonzalez click here.