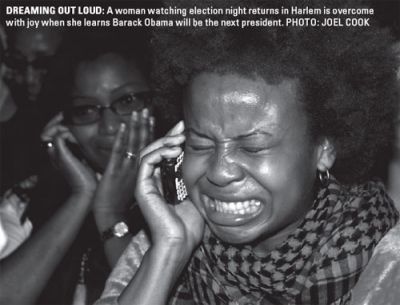 “YES WE CAN,” we sang, our voices like a flag blowing through the street. We raised our chant to the sky as men with drums hammered out rhythms. And we danced our victory dance. Faces blurred into faces. Eyes reflected the same brilliance. Hands touched hands. A man pulled me into the circle where we writhed like human flames. Heat, unrelenting heat carried us into a vortex of time. We sang sounds older than words. We felt history older than memory, some original human need that could not be named blasted through us. When we used words again it was the chant “YES WE CAN!”

Dizzy, I staggered out of the circle and stood on 125th Street. Obama supporters flowed around me like a river. Arms on shoulders, they smiled, laughed and raised their hands and yelled. Every color, shape and shade of humanity moved in the same direction. Rainbow America, more colored than not, was not supposed to arrive until 2042, according to the U.S. Census Bureau. But here we were, dancing in the street.

I spread my arms out wide as if to hold the people and this moment forever. “This is who we really are,” I shouted. And when we are not ourselves, I thought, it’s because to survive we internalize a gaze as if The Man stood above us, his one-eye like a sweeping searchlight in our skulls, its beams shooting out of our eyes as we blast each other with luminous suspicion. Terrified, we wear a mask for Him and blindly build the wall.

On Election Day, the wall fell. Under the pressure of millions of people, chipping one vote at a time, it fell beneath our feet and we poured through.

Obama promised us this moment and we believed him because he was our hope for redemption. Since the first slave was bound to the first master, intimate exploitation was secured by a line of division. Each generation, each immigrant group was made to re-enforce that line, build it higher until it became a wall too large to bring down. When we went into the voting booth and pulled Obama’s name, we reached through the symbolic blackness layered on brown skin to the humanity of the man within.

When police cars with spinning red and blue lights nudged Harlem’s revelers onto the sidewalk, I hopped in a cab for Union Square. During the ride, I thought of earlier that morning, walking to a church near my home in Bed-Stuy, joining the line of people, seeing the warm joy in their faces. Older black folk, hobbling on canes, were led to the front. They went into the booth and came out smiling.

As the voting official looked for my name, an older woman teased me, “Who you voting for.” I smiled and said “I’ve been waiting to vote for McCain since 2000.” We laughed knowingly. I asked her how she felt. Her face opened and eyes watered, “Oh honey, you don’t know how long I’ve waited to feel what I’m feeling right now.” We hugged, swaying back and forth like a bell ringing.

I voted, left the church and saw that the line went down the block and around the corner. Young men in bandannas, mothers sipping coffee, workers in hard-hats, hipsters nodding with I-pods were sharing the same sidewalk, the same goal, the same need to break the wall of color.

Four centuries, I thought, four centuries of slavery and terror and doubt. My eyes were hot and wet. I blinked and saw the cab had pulled up at Union Square.

Young people swirled in circles around the tuba players and drummers. Jumping out, I ran to them as they chanted “Yes we can!” Curious, I waited for the back-beat and yelled, “Stop the war!” The two chants went back and forth for a few minutes but no one took up my call.

I bought incense and walked to Tompkins Square Park, smoke curled behind me like a vanishing tail. Along St. Mark’s hundreds milled around. Some danced to the Bob Marley anthems that poured out of an apartment window like a waterfall of music. Some waved the flag and sang “The Star-Spangled Banner.” Some kissed strangers. At the end of the street, police stood grim-faced with an unrolled orange net. We wanted the park. The cops gripped the orange net. The silent lightning of challenge flashed between us and police. We stood close. Eye friction then word sparks.

But a new chant rose, “Dance, cops, dance,” we yelled. “Dance, cops, dance!” They didn’t come over but we spun in our center of gravity and the police stood there, holding a net that only they were trapped in. In the morning, I stumbled home and slept in my clothes.

Days later I play my phone messages from election night to feel rapture again. In the last message from a friend, I can hear the crowd roaring behind her, “History. This is history, this is such an incredible moment, I am without words but I just wanted to share my joy and hope.”

I clicked off knowing her message will be erased automatically in a month. We can never go back to that night. It was a one-time event but hearing her reminded my body and I rubbed my chest, feeling the afterglow.