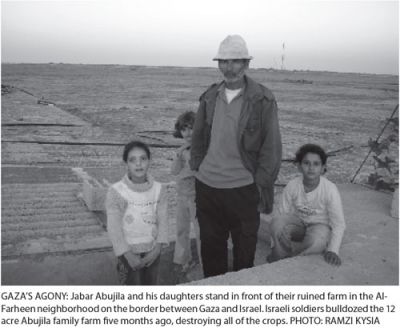 GAZA STRIP, PALESTINE — In a small cafe in Gaza City, Amjad Shawa, the coordinator for the Palestinian NGO Network (PNGO), sips black coffee and ruminates on the Israeli blockade of Gaza. “This siege isn’t about ‘security’ or even about Hamas,” he says. “Israel’s ultimate aim is to separate Gaza from the West Bank and kill the Palestinian national project.”

The Gaza Strip, a 25-mile-long narrow coastal plain wedged between Israel and Egypt, is home to 1.5 million Palestinians. Despite its small size, Gaza in many ways encapsulates the essence of two of the world’s major conflicts: the rise of political Islam and the use by the West of collective punishment and economic coercion as a brutal counterweight.

Since Hamas won parliamentary elections in January 2006, Israel has subjected Gaza to an increasingly severe blockade. In June 2007, after Hamas defeated militants aligned with Palestinian President Mahmoud Abbas and forcibly asserted control of Gaza, Israel tightened the blockade to include everything except occasional deliveries of humanitarian goods. The local economy has shattered as a result, leading to steep increases in unemployment, poverty and childhood malnutrition rates.

While Abbas and the Fatah party still govern the West Bank with Israel’s full support, Hamas faces an uncertain future. Although Gazans have rallied around the government, there is also increasing public frustration with the moribund economy.

Rawya Shawa, an independent member of the Palestinian Legislative Council from Gaza, describes Palestine as being in political limbo. “When you’re in power it’s never the same as when you’re on the outside,” Shawa says. “Seventy percent of Gaza are refugees. Fatah led the Palestinians for 45, 50 years. Fatah failed. They didn’t deliver anything. Hamas, now, they are trying. They didn’t succeed
yet, so people are still just waiting.”

THE RISE OF HAMAS

Confronting the decline of pan-Arab nationalism which had peaked during the 1960s and ’70s and the collapse of the 1993 Oslo Accords, Hamas found fertile ground in Palestine by combining social welfare projects, religious traditionalism, anti-elitism (Prime Minister Ismail Haniyeh still lives in the house where he grew up in Beach Camp, one of Gaza’s poorest neighborhoods) and a hard-line stance toward Israel. Although Hamas is currently observing a unilateral ceasefire, in the past its military wing has sent small rockets and suicide bombers into Israel, leading to its designation as a terrorist group by Israel and the United States.

Few Gazans agree with that description. According to B’Tselem, an Israeli human rights group, 955 Palestinian minors have been killed by Israeli security forces, while 123 Israeli minors have been killed in Palestinian attacks since the start of the second intifada in September 2000. With the blockade, 3,500 out of 3,900 factories in Gaza have closed, leading to over 100,000 private sector layoffs. Per capita income in Gaza is less than two dollars a day, and 80 percent of families are completely dependent on international food aid.

The siege has led to massive shortages that have rippled through the economy and society. Shortages in fuel caused gasoline prices to spiral to $50 a gallon in early summer, leading to sustained power cuts. Hospitals, dependent on diesel-powered generators, regularly lost power for up to 12 hours a day. Unable to operate irrigation pumps, farmers experienced significant loss of crops. Most family homes have running water for less than six hours a day, and almost a third of homes have no running water.

Compared to December 2005, less than 20 percent of the supplies needed for normal trade are allowed into Gaza by Israel, and foreign investment has fallen off by over 95 percent, leading both the World Bank and some Israeli human rights organizations to call for an end to the siege.

“This is not a natural disaster,” says John Ging, director of the U.N. Relief and Works Agency in Gaza. “It is a man-made disaster created by policies that are not humane.”

The people of Gaza aren’t waiting for the siege to end to deal with the crisis. In January, hundreds of thousands of Gazans poured into Egypt when Hamas demolished a border wall that Israel had erected in 2003. In February, the Popular Committee Against the Siege organized thousands of Gazans into a “human chain” that stretched along the entire length of the Gaza Strip.

“My phone was ringing off the hook all day because they [the Israelis] thought we were going to storm the border,” says Sameh Habeeb, one of the event organizers. “Israel couldn’t believe that thousands of Arabs could peacefully protest. When there’s armed resistance Israel can send their rockets and F-16s, but they don’t know how to respond to civil resistance. Nonviolence makes the Israelis crazy.”

The greatest act of nonviolent resistance in Gaza has been simply surviving. Some families have taken to catching and raising wild rabbits and birds to supplement their diet. A network of perilous tunnels that cross into Egypt has claimed several lives, but has also helped to relieve shortages with smuggled goods. In recent weeks, an underground pipeline for gasoline has substantially eased the fuel crisis. Automobile conversion kits, allowing cars to run off cooking gas, sell for about $300. Shortages in propane have led families to revert to wood-burning stoves for cooking and, with the scarcity of concrete, Gazans have returned to using earthen bricks for construction.

The collapse of Gaza’s economy is an example of imperialism at its most extreme: prevent raw materials from entering the economy, weaken and tear down native industries through military violence and blockade, allow access only to finished products imported from the outside (in this case, Israeli products) and force the local population and its uncooperative government to expend and exhaust whatever resources and reserves they had managed to set aside. When the Gaza blockade is finally lifted, people here will be hard pressed to recover, even with increased humanitarian assistance.

PNGO Director Amjad Shawa points out that the blockade is part and parcel of the ongoing Israeli occupation. “Gaza is still occupied, legally and physically,” says Shawa, “and the siege is simply one part of this aggression. We don’t need more aid. What we need is an end to the occupation.”

Ramzi Kysia is an Arab-American writer and activist, and one of the organizers of the Free Gaza Movement. To find out more, visit www.FreeGaza.org.