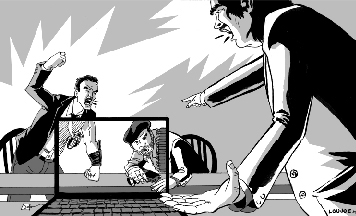 Since the Colombian government bombed a guerrilla camp on Ecuadoran soil March 1, it has orchestrated a highly effective media campaign backed by material allegedly found on laptops and hard drives belonging to a high-ranking member of the Revolutionary Armed Forces of Colombia (FARC), the largest rebel group in Latin America. The laptops were used almost immediately after the raid to implicate both the Ecuadoran and Venezuelan governments in drug-trafficking and “terrorist” connections to the FARC. Colombia’s media campaign has been based on dubious evidence at best, and many charge that the “magic laptops” are being used to deflect criticism of Colombia’s violation of Ecuadoran sovereignty, distract the public from a domestic political scandal and justify the government’s policy of total war against the FARC.

In September, the U.S. Treasury Department’s Office of Foreign Assets Control (OFAC) announced that it was designating one former and two current high-ranking Venezuelan government officials as collaborators with FARC. These assertions came a day after Venezuelan President Hugo Chávez announced that he was expelling the U.S. ambassador in solidarity with Bolivia’s Evo Morales, who had done the same a day earlier. While OFAC did not specify its sources, an anonymous Bush administration official told The New York Times that the allegations were partly based on evidence from laptops recovered from a FARC camp in Ecuadoran territory bombed and raided by the Colombian military on March 1.

These “magic laptops,” which seem to supply evidence of FARC collaboration at an opportune moment for the Colombian and U.S. governments, have formed the centerpiece of a propaganda campaign launched by the Colombian government and security forces, abetted by the media in Colombia, the United States, and Spain.

This campaign uses a well-established technique: Allegations of FARC ties have long been used in Colombia to defame human rights activists and dissident politicians, often leading to death threats or assassinations by the army or paramilitary forces. The laptop-based allegations have been made through press conferences and intelligence leaks, as new charges have been rolled out to counter Ecuador’s consistent diplomatic victories at the Organization of American States (OAS) and other international bodies. It has also served to distract attention at home from a growing scandal connecting Colombia’s President Alvaro Uribe’s administration to narco-paramilitaries.

The most serious accusation made against the Venezuelan government was that it had promised the FARC a $300 million payment or loan and that Chávez had maintained a financial relationship with the FARC since 1992. It was first reported as a payment that had already been made, perhaps in exchange for the FARC’s February hostage release mediated by Chávez. But on March 30, The New York Times, relying on information leaked by the Colombian government, claimed that there was evidence of a $250 million loan “to be paid when we take power.” Mirroring Ecuador’s appeal to international law, Colombia announced that it would take its charges of FARC ties to the OAS, and Uribe threatened to bring charges against Chávez before the UN International Criminal Court for “aiding genocide.”

Media outlets, particularly in Colombia, the United States, and Spain, have been complicit in the Colombian propaganda campaign, embedding themselves in a perceived fight against the FARC and its supposed allies in the Ecuadoran and Venezuelan governments. As an unnamed U.S. intelligence official told the Los Angeles Times in March: “I think you have to take at face value what the Colombians are saying.” The mainstream media have done just that—particularly in Colombia.

Uribe’s “War on Terror,” and that of his allies, shows no signs of letting up, and the use of unverified electronic evidence to prosecute that war seems likely to continue.

Daniel Denvir is an independent journalist based in Ecuador. For a detailed analysis of media complicity in the Colombian propaganda campaign see nacla.org, where the full version of this article was originally published.