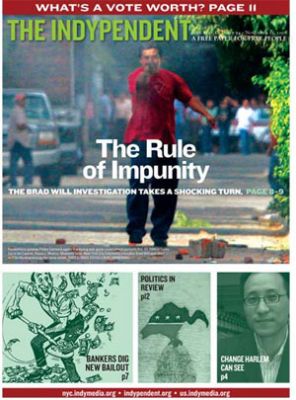 JUST LIKE US
Responses to “Dreams from My Mother,”Oct. 27:

I can only imagine little kids reading their history books and seeing one line, Barack Husssin Obama, first African-American president. I hope his autobiography is required reading.
—F.E. Duncan

Good to know that Obama is human like everyone else. Guess that means he’s not gonna change anything either. Things never change from above and hopefully people will learn that Obama is the perfect example of that.
—jared

Thank you for presenting the “other” choices. A “wasted vote” is one cast to a representative that does not represent us, not one that loses. More choices give us more of a chance to be represented in the selection.
—puccolo

I feel like it is wrong to keep a man away from his home when all he wants to do is check on things and make sure his place is still secure. If the city would have allowed its residents back in right away, many items could have been washed and salvaged, houses could have been opened up to air out and begin drying instead of containing the quick-growing mold. Damage would have been done just the same, but there would have been much more salvaged.
—J.P. Smith, Galveston, Tx.

WAR OF WORDS
Response to “‘Obscene Monument to War’ Returns to NYC,” Oct. 27:

I find it to be shabby journalism when Mr. Stoner did not even seek comment from the Intrepid Museum leadership when writing such a one-sided, bullshit piece on 12 people protesting the return of the Intrepid.
—Bill White, President of the Intrepid Foundation

Author’s Reply:
I wonder if Mr. White would call every single other article written about the Intrepid “shabby journalism” because none mentioned the other side of the story — that there were protesters there, and that there are folks upset about the ahistorical (and pro-war) nature of the museum’s exhibits. My guess is that he would not.
—Eric Stoner