After nearly 50 years of Republican control of the New York State Senate, Democrats and the Working Families Party unseated two long-term incumbents to gain a 32-30 majority on Nov. 4. This should pave the way for long-overdue legislation to address New York City’s housing crisis that tenants’ groups have been working on for years.

At separate election-night victory parties at a downtown bar and the Sheraton Hotel, WFP Director Danny Cantor and Deputy Director Bill Lipton both declared that the first fight under the new regime in Albany “will be over rent regulation.”

The top priority for the tenant movement and affordable-housing advocates is a package of bills called the “Real Rent Reform” agenda. These include repealing vacancy decontrol for the city’s one million rent-stabilized apartments; extending protections to the tens of thousands of tenants whose apartments have been taken out of the Mitchell-Lama and Section 8 programs; reforming the New York City Rent Guidelines Board; and restoring the city’s home rule over rent laws by repealing the 1971 Urstadt Law. Another goal will be restoring rent controls to units that have been deregulated. 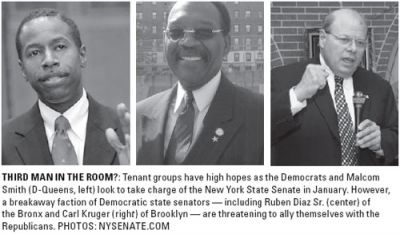 Tenants have long awaited an end to the Republican control of the senate. Under former Gov. George Pataki and Majority Leader Joseph Bruno (who retired last June amid a federal corruption probe), the state significantly weakened rent and eviction protections in 1997 and in 2003. The Assembly passed several bills related to the Real Rent Reform agenda in May, but Bruno blocked them.

The Democrats took the Senate for the first time since 1965 by winning seats on Long Island and in Queens. In the 15th District (Glendale-Middle Village), pro-tenant City Councilmember Joe Addabbo Jr. won 57 percent of the vote to defeat nine-term incumbent Serphin Maltese. This race was the top priority for many concerned with recapturing the senate. The Tenants Political Action Committee, labor unions, the National Abortion Rights Action League, Citizens’ Union, Planned Parenthood and the League of Conservation Voters blanketed the district with volunteers.

In other key races, Democrats Craig Johnson in Nassau County and Darrell Aubertine of the Oswego-Watertown area upstate, who both narrowly won their seats in special elections, were re-elected for full terms. Incumbents Andrea-Stewart Cousins of Yonkers, Suzi Oppenheimer of Westchester, and Toby Ann Stavisky of Queens also defeated Republican challengers well financed with real-estate money. But the other Queens Republican targeted by tenant groups, Frank Padavan of the 11th District (Bayside-Queens Village), appeared to have held his seat. With absentee ballots not yet counted, he led City Councilmember James Gennaro by less than 750 votes.

Democratic plans were temporarily disrupted when a group of four senators — Carl Kruger of Brooklyn, Pedro Espada Jr. and Ruben Diaz Sr. of the Bronx and the newly elected Hiram Monserrate of Queens — threatened not to back fellow Democrat Malcolm Smith of Queens for the post of new majority leader in January.

Some observers suspect that Espada has taken contributions from the Rent Stabilization Association (RSA) a landlord lobbying group that has been openly offering large contributions to any politician who would accept them. But this is not possible to verify as Espada has not filed required campaign contribution reports and is being sued by the Board of Elections to do so.

Monserrate, on the other hand, has long been close to the Working Families Party and claimed to be acting only to increase the representation of Latinos in leadership positions.

At press time, the mini-revolt seemed to be crumbling. Monserrate endorsed Smith on Nov. 8. And party-switching could be politically dangerous: Olga Mendez joined the GOP in 2002 after 24 years in the Senate as a Democrat, but lost her re-election bid in 2004 as a Republican. (Mendez, who represented the East Harlem/South Bronx district, claimed that Democrats hadn’t done enough for Latinos and that she would have more clout as a member of the majority. But when she got a bill to raise the minimum wage through the senate, Pataki vetoed it.)

The long-anticipated elevation of Malcolm Smith to majority leader will not make progress on housing issues automatic. Smith has sent mixed messages about his intentions. He has stated his support for repeal of vacancy decontrol and other measures, but declined an invitation when Met Council and other tenant-rights advocates traveled to Albany last May to witness the passage of pro-tenant bills by the Assembly. Soon afterward, RSA head Joseph Strasburg told the New York Observer that Smith was “attempting to be the voice of reason” to avoid jeopardizing contributions from real-estate interests.

On Nov. 7, Smith announced that he had chosen Angelo Aponte to head his transition team and possibly become his chief of staff. As state housing commissioner under former Gov. Mario Cuomo, Aponte was no friend to tenants, stating that he did not believe in rent regulations.

All of this means that the end of Republican control of the state senate is only the beginning. But with the Working Families Party and other allies, such as the unions participating in the Real Rent Reform and Housing Here and Now coalitions, the prospects for stronger rent and eviction protections are definitely brighter.

This article originally appeared in Tenant/Inquilino, the newspaper of the Metropolitan Council on Housing, www.metcouncil.net.