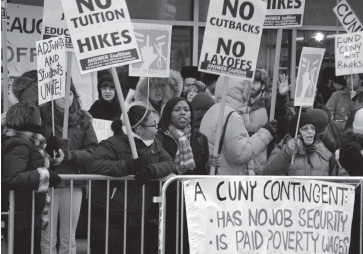 A LESSON IN CLASS: Chanting “Foreclose Wall Street, bail out the students!” about 100 City University of New York (CUNY) students and faculty and City Councilperson Charles Barron rallied in the cold outside Baruch College Dec. 8. They gathered as the Board of Trustees met inside to approve tuition increases of as much as 15 percent that would take affect beginning in the fall of 2009. Under the plan, tuition could increase at CUNY’s 11 senior colleges by as much as $600 per year from $4,000 to $4,600, and would go up by $400 from $2,800 to $3,200 at CUNY’s six community colleges. Earlier this year, CUNY’s Board approved five-figure raises for all of the University’s top officers led by Chancellor Matthew Goldstein whose, base pay was increased from $395,000 to $450,000.