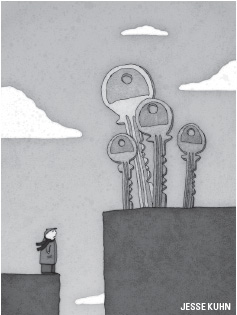 About ten years ago, a lawyer suggested that I withhold my rent because my landlord had consistently failed to provide adequate heat, and my building was infested with mice and roaches. Because the landlord had had a string of serious violations, the lawyer was convinced that I would get a rent abatement in New York City Housing Court. When the landlord took me to court for not paying rent, his attorney offered no defense to my complaints about conditions in the building. I won an abatement and did not have to pay any rent for six months.

Little did I know at the time that allowing the landlord to take me to Housing Court would make it almost impossible for me to rent another apartment, not only here in New York City, but anywhere in the United States. Had I known that, would I have still withheld rent? Probably not. I definitely would not do it again.

A few years later, I tried to move, as the conditions in my building had gotten worse. When I mentioned the court case, a real-estate agent told me, “Don’t even bother to look for an apartment. No landlord in this city will rent to you.” I didn’t volunteer the information at another real-estate agency, but the agent there asked if I’d ever been to Housing Court. Once again I was told that it would be impossible for me to find another apartment.

I had been a tenant activist for years and had never before heard about the tenant blacklist. Neither had Adam White, who withheld rent to protest a leaky roof. Although he prevailed in court and got a rent abatement, he was denied an apartment based on the report from a tenant-screening agency, which indicated only that the landlord had initiated a case against him.

In 2007, tenant attorney James Fishman settled a classaction lawsuit by 35,000 tenants against First American Registry, the largest “tenant screening bureau” that buys data on Housing Court cases from New York State and sells it to landlords. The company, which has changed its name to First Advantage, agreed to pay $1.9 million in damages. It now must indicate the outcome of the case on all its reports, expunge cases found to be without merit or brought in error, and expunge all cases after seven years.

The suit did not eliminate the problem. Federal District Judge Lewis A. Kaplan, who approved the settlement, said that “it leaves defendants’ business model essentially intact” and “the potential for abuse quite plainly remains.” The New York State Office of Court Administration (OCA) continues to sell electronic data on Housing Court cases going back about 15 years. While court records are public, selling them en masse makes it much easier to use them to develop a blacklist, explains Fishman.

“The law only says the court has to make court records available at the clerk’s office one file at a time. What the court is doing here is selling in an electronic form a mass quantity of information all at once,” says Fishman. “The court system should not be selling this data. You would put these tenant-screening companies out of business if the source of information dried up.”

The system is rife with serious problems. Electronic data can often be sketchy or inaccurate. Tenants who wish to have their cases expunged must submit a court order of judgment and a written request, often including court documents and letters from landlords. And finding out whose list you’re on can be a daunting task. Fishman filed a Freedom of Information Act request and got a list of eight companies that buy Housing Court records.

Tenant-screening bureaus sometimes include cases in which the tenant initiated the court proceeding, usually in order to get repairs, Fishman adds. Though tenants who file HP (housing part) actions are not supposed to be blacklisted, he explains, there’s no guarantee that they won’t be.

He acknowledges that the lawsuit, although definitely a step in the right direction, has by no means resolved the situation. “What we did intend and accomplish is to raise people’s consciousness of the problem,” he says. “Rights are worthless if you cannot enforce them.”

Until the OCA is permanently enjoined from selling electronic data to screening companies, Fishman says that all tenant-screening companies should be licensed. That way, everyone would know with whom they are dealing. This would have to be done by state law.

In 2007 and 2008, State Senator Liz Krueger and Assembly member Daniel O’Donnell sponsored a bill that would have made it unlawful for landlords to consider a tenant’s history in court cases that arise from landlord-tenant disputes, unless that tenant was evicted against his or her will. “This would ensure that appearance in court in and of itself would not prevent a tenant from obtaining new housing,” the bill said. Supporters of the bill noted that of the 375,000 Housing Court cases each year in New York State, only 25,000 result in warrants of eviction.

The bill never got out of committee in either house of the Legislature.

Despite the legislators good intentions, the bill did not appear to have a strong enforcement mechanism. Proving that they were denied an apartment solely because they had appeared in Housing Court would probably be quite difficult for tenants.

Until the OCA stops selling data, tenants could be protected by requiring screening agencies to expunge all cases in which the tenants prevail and are given rent abatements. Another important consideration, says Louise Seeley of the City Wide Task Force on Housing Court, is protecting tenants who were residing in foreclosed houses and have been evicted through no fault of their own.