The American Museum of Natural History has taken a stand in the debate on climate change. It’s about time that a premier science museum has stepped forward to present to the public what scientists have been sure about for decades.

The exhibit, “Climate Change: The Threat to Life and a New Energy Future,” should be commended for its dynamite mixed-media scientific displays that explain how global warming is responsible for the drastic changes taking place across the world. The growing crisis, however, cannot be deciphered solely through disengaged scientific means, but must rather be presented within the historical context of a social, economic and political legacy. 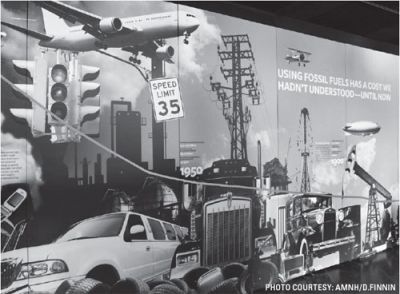 It’s true that the exhibit’s introduction better examines the root causes of climate change than Al Gore’s 2006 ice-breaking film, An Inconvienent Truth. A basket of coal greets the viewer in the first few steps, with a sign reading, “Rock that burns had begun a revolution.” Red neon tubing stretches up the wall, graphically depicting the rise in carbon levels to alarming levels in the atmosphere in 50-year increments from 1600 to the dramatic levels of 2000. Beneath the line, a collage of black-and-white images indicates landmarks in technological progress, from the steam engine to the automobile to the airplane. This display, entitled, “Handwriting on the Wall,” leaves no room for dispute: Climate change is directly related to the energy demands of a coal-fueled Industrial Revolution throughout the last 150 years. This message would have been politically incorrect just ten years ago (and still is in the Bush administration and Sarah Palin’s Alaska). Unfortunately, the exhibit fails to delve much deeper.

“Where we are is because of the Industrial Revolution,” said lead curator Dr. Edmond Mathez in a telephone interview. “So the implicit point in the [exhibit’s] introduction is that no one is to blame for this. It is not a stepchild of our recent consumptive society. It just because of our innovativeness, basically, that we have gotten to this point.”

But divorcing the Industrial Revolution from its social, political and economic context is irrevocably biased, implying that industrialism-by-means-of-capitalism was an innocent, natural evolution. Another story was told earlier this year at the annual United Nations Permanent Forum on Indigenous Issues, when native peoples from around the world met to discuss the impacts of climate change on their communities. No one there would claim “no one is to blame” for the pending global climate catastrophe. Rather, industralization is a direct consequence of centuries of conquest by imperial nations — the pursuit of wealth, power and progress by crushing native peoples and then seizing, privatizing and liquefying the landscape. Nature became a commodity and externalities became a problem left for future generations. (See “Indigenous Voices Demand Climate Justice,” The Indypendent, April 25).

The curators effectively create a sense of urgency and distress through several display techniques. Key words are displayed in reds, such as “trap heat” and “warmer earth,” in large paragraphs written on the walls. Dramatic music and a stern female voice narrating the short film, Changing Climate, Changing World, echo through the rooms. And headlines in red lights race across a news ticker on the wall, reminding the viewer that the exhibit exists in a real-time political moment (although Mathez noted that the items are only updated every six weeks or so).

The effects of climate change on the environment are examined: from severe storms and fires, the spread of disease and pests, to the rise in sea levels as a result of melting glaciers. The most dramatic display is the life-size dying coral reef, with shimmering lights from above creating the illusion of swimming in an underwater graveyard. A miniature replica of Manhattan is built over a computer screen showing how the rise in seawater — up to 16 feet — would turn most Manhattan streets blue. Two women were looking at the display. “My apartment will be okay,” one said to the other.

Meandering through the photographs of floods and fires to the sound of water trickling between glass plates, it struck me that something was missing: the faces of people worldwide who are currently suffering the consequences of climate change. When I asked Mathez why these voices where missing, he said that the displays were about “potential consequences” and that “by and large we haven’t felt the dire consequences” yet. This seemed an odd response considering that climate refugees already exist. People from the South Pacific island Carterets called on officials at the U.N. climate change conference in Poland in early December to provide aid, as their ancestral lands will soon be swallowed by rising seawater. And the Inupiat tribe in Alaska filed a lawsuit last summer against 20 major oil, gas and electric companies, charging that they are responsible for causing the Arctic ice to melt from beneath their villages. The U.N. Intergovernmental Panel on Climate Change predicts that by 2050 there will be more than 150 million climate refugees.

The exhibit concludes with energy “solutions” that boil down to a flat-out giveaway to industry — namely, coal and nuclear. The solutions mirror President-elect Barack Obama’s climate change talking points, a plan that many experts say is riddled with problems. While the exhibit began by pounding coal as the climate culprit, it wraps up with a panel advocating “clean” coal-fired power plants as a cornerstone of our energy future, with no indication that this proposal is highly controversial within the scientific community. The display describes carbon capture as a controversial future technology where “experts are working to clean up coal” by trapping carbon from emissions in coal-fired power plants and then burying it underground.

“Whether we like it or not, coal is with us,” Mathez said when questioned about the exhibit’s promotion of so-called “clean coal” technology. “Coal is in our future because it is cheap … and is abundant in exactly the countries that are using it.”

This admission directly counters the recommendations of leading scientists including NASA’s climate whistleblower James Hansen and many others, who contend that humans must put a moratorium on new coal-fired power plants. Al Gore has called for thecomplete elimination of fossil fuels in ten years. And in the recent issue of Mother Jones magazine, top climate activist Bill McKibbon puts it directly, “No more new coal plants … and the people who tell you about clean coal are blowing smoke — literally.” A leading sponsor of the exhibit, Bank of America, has been the target of environmental campaigns to force banks to stop financing coal mining and a new generation of coal-fueled power (see sidebar below).

In September, Gore surprised many by saying, “I believe we have reached the stage where it is time for civil disobedience to prevent the construction of new coal plants that do not have carbon capture and sequestration.” The exhibit completely ignores the growing environmental and climate justice movement worldwide — thousands of people from Australia to Turkey to Europe to the United States who are organizing campaigns and locking themselves to fences, trains and bulldozers to stop coal exports, new power plants, airport expansions and new nuclear energy. While the exhibit clearly demonstrates that humans are teetering on the brink of a crisis, it offers no insight into the correlation between global warming and human justice.

If the American Museum of Natural History wants to truly lead the debate on climate change, its curators might want to talk to Rising Tide, a decentralized global network of climate justice activists. When asked about the climate justice movement, Mathez confessed he knew little about it. These activists contend that “climate change can only be addressed by exposing the intersections between the oppressions of humans and the earth. The ‘natural’ disasters caused by climate change amplify the injustices inherent in a capitalist, racist and patriarchal society; we must respond to these disasters in ways that do not continue that oppression.”

Visitors should be highly skeptical of the proposed energy solutions after learning that Bank of America is the leading partner of the American Museum of Natural History’s climate change exhibit. The environmental organization Rainforest Action Network (RAN ) has been pressuring the bank, along with Citigroup, to stop pouring billions of dollars into devastating surface coal mining and new coal-fired power plants. On April 1, Bank of America CEO Kenneth Lewis was voted 2008’s Fossil Fool of the Year in an online contest sponsored by RAN and other groups. Environmentalists targeted the bank Nov. 17 in a “day of action against coal and coal finance.” Lead curator Dr. Edmond A. Mathez confessed that he was not aware of the criticism of the bank and that “it doesn’t concern me in this particular context.”

As a result of pressure by RAN and the Natural Resources Defense Council, the bank announced Dec. 3 that it will “phase out financing of companies whose predominant method of extracting coal is through mountaintop removal” mining in central Appalachia, the process where mountains are blown apart to expose coal layers below. 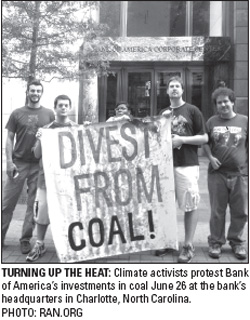